July 31, 2019
"Waiting On Wednesday” is a weekly meme that first originated at Breaking the Spine but has since linked up with “Can’t Wait Wednesday” at Wishful Endings now that the original creator is unable to host it anymore. Either way, this fun feature is a chance to showcase the upcoming releases that we can’t wait to get our hands on!

RJ Baker's Wounded Kingdom trilogy pits him as one of the finest talents in fantasy to have emerged in the recent years. [Note to myself: Finish that damn trilogy! I read the first book, Age of Assassins and was very impressed!] Now, from the dependable stables of Orbit comes his next series, Bone Ship - that seems every bit as interesting as his previous series or even better! Battleships, Dragons and a hundred-years war!! Shiver me timbers, lads. 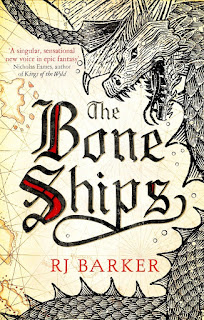 A crew of condemned criminals embark on a suicide mission to hunt the first sea dragon seen in centuries in the first book of this adventure fantasy trilogy.Violent raids plague the divided isles of the Scattered Archipelago. Fleets constantly battle for dominance and glory, and no commander stands higher among them than “Lucky” Meas Gilbryn.But betrayed and condemned to command a ship of criminals, Meas is forced on suicide mission to hunt the first living sea-dragon in generations. Everyone wants it, but Meas Gilbryn has her own ideas about the great beast. In the Scattered Archipelago, a dragon’s life, like all lives, is bound in blood, death and treachery.