Showing posts from June, 2019
Show all

The Girl in Red by Christina Henry

Christina Henry has of late shifted her focus onto darker retelling of fairy tales - Alice and Red Queen, The Mermaid - and we love the decidedly un-disney like interpretations of the fairy tales. Grim tales steeped in dark atmospheric settings that will have your heart palpably beating real-fast as the narrative chugs on with manic speed towards that thrilling finale. And so when I got the invite to review The Girl in Red , posed as a different spin on the red riding hood and the wolf story, I jumped for it. But as I read the initial few chapters, I realized that as usual, Christina has taken an axe to our preconceptions about how this story of the girl in the woods who meets the wolf, will turn out to be. Red , birth name Cordelia, is a twenty-something young girl on a long hike through the woods and abandoned forests somewhere in the US, trudging through to get to her grandmother's house (Yup: A cabin in the woods, that remains true!) after the whole world has been des
Post a Comment
Read more

River of Teeth by Sarah Gailey 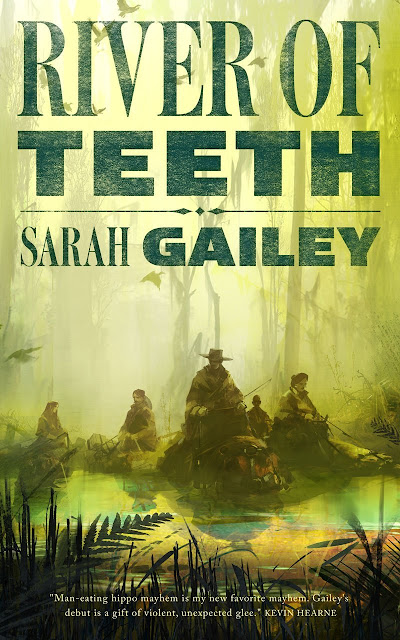 I know I'm coming late to the American Hippo party but better late than never!  River of Teeth by Sarah Gailey a neo-western that pulls no punches, by way of an imagined American alt-history romp where Hippos have been introduced into domestication [ Think Hippo-farms or ranches] It's a very clever twist on what could have been, based on an actual attempt to pass a bill in the US Senate to import hippos for meat. The story follows the capers [ Oh despite so many tedious reminders, I just cannot think myself to call that an "operation" all aboveboard! Come on. ] of a group of determined men and women, out to ensure that a lake full of feral wild hippos can be herded out into the wilds, clearing up the Lake for safer commercial uses. The only issue may be, that the man who claims to have gotten this "legitimate" job order from the Feds, maybe holding out on a dirty secret, a deeply nursed personal vendetta. And little matter that the dangerous man who ru
Post a Comment
Read more 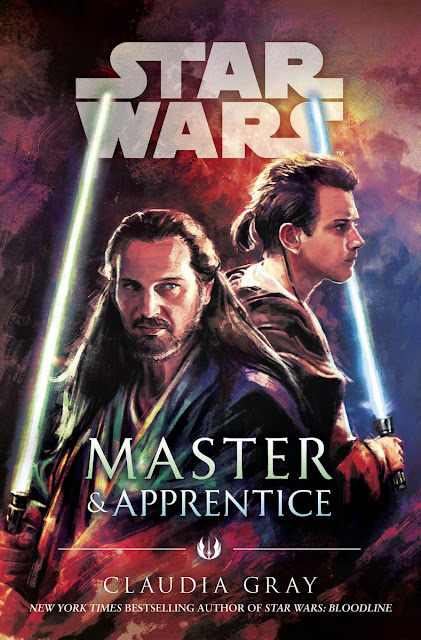 Master and Apprentice (Star Wars ) is a fantastic book that has rekindled my love for the whole star-wars series. Love what Claudia Gray has done with the characters of Obi-wan Kenobi and Qui-Gon Jinn , the Jedi Masters who ultimately discover Anakin Skywalker, who according to the prophecies is the Chosen One who can bring in the balance between the Light and the Dark.  Master and Apprentice , released to celebrate twenty years since Phantom Menace came out in 1999 that set off another era of star-wars fandom for us ( born in the 80's who missed the euphoria of the original star-wars trilogy) is actually a fascinating character study of Qui-Gon Jinn, the rebellious and eccentric Jedi Master and Knight who is willing to place his faith in the Force more than just the rules set down by the Council. I absolutely absolutely adored the way in which his character grew from strength to strength. At the heart of it, this book is mainly about the rocky relationship between Qui Gon a
Post a Comment
Read more

A Storm of Locusts by Rebecca Roanhorse ( Sixth World # 2 ) 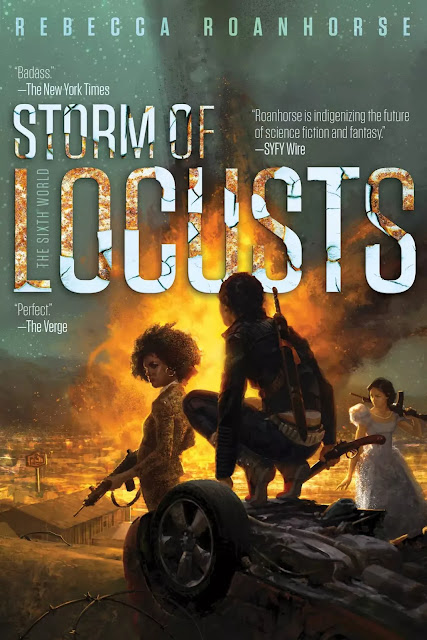 Rebecca Roanhorse easily makes a bid for becoming my hot favourite author in the recent times, with this strong second instalment of the Sixth World Series A Storm of Locusts - an imaginative hot mash up of urban fantasy with a twist, throwing in the depth of amazing world building based on Navajo myths and immersive characterisation, making us root for this central character, a monster-slayer with an attitude named  Maggie Hoskie along with her friends. Trail of Lightning was an electrifying opener to this series, introducing us to the world of Dine'tah, indigenous people who found sanctuary behind the Great Wall, a magical structure built by the Dine'tah council to save their world when the rest of it got wiped out, in a combination of floods (Big Water) and war (Energy Wars) Some of the them, including Maggie, our central protagonist had this awakening of magical abilities, traced back to their original tribes. It also brought down the Navajo Gods of the legends d
Post a Comment
Read more

Netflix Saturdays : I pledge to write a movie/series recommendation every Saturday, cherry-picking from the vast collection of Movies/TV series playing on Netflix. Well, if you were planning to binge-watch away your weekend in front of the TV/Laptop/Hand held device, hopefully my review(s) help you make an informed choice! Happy Flixing, fellas. Trust Netflix to come up with weird recommendations that turn out to be runaway winners! Whatever your data scientists are doing to improve that recommendation engine algorithm, more power to you fellas [ Sorry! couldn't resist that dig as I do analytics for a living myself ] So Mard Ko Dard Nahin Hota (MKDH) just randomly came up on my Netflix list and without any inkling, I just started watching it yesterday night. You know, there are some movies that convince you in the first few frames that you are in for something special? MKDH was one of those. The first scene has a young man in a maroon track suit facing down a set of
Post a Comment
Read more
More posts