September 18, 2018
Think Assassins in fantasy fiction - and you have a handy number of names that pop into your head. Brent Weeks Angels Trilogy, Robin Hobbs' Assassin series and of course, for those of you who have played the games, the Assassin's Creed. 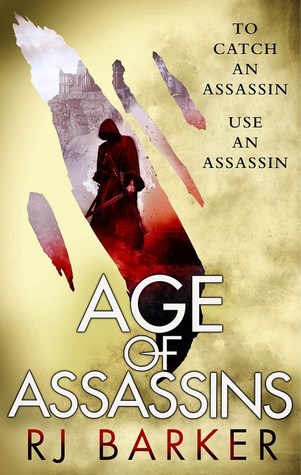 Girton Clubfoot is possibly another name you want to add to that pantheon of greats having had a fantastic opening with the Age of Assassins by R J Barker. I just finished the first book and I really, really enjoyed this one. I had been meaning to get into the Wounded Kingdom trilogy by R J Barker for a while now - This whole series comes highly recommended by a few of my favourite bloggers and so I bought the book one the first chance it came up on sale.

The Age of Assassins is a low-fantasy story featuring familiar traditional setting of knights, squires, sorcerers and assassins set up as a murder mystery within a castle in a land plagued and soured lifeless by the use of sorcerous magic. The Tired Lands is almost a post-apocalyptic dust bowl after having been rendered sterile when the Black Sorcerer sucked the life out of earth a long while back using sorcery. Today sorcerers or kids with even remote sensibilities of sorcery are hunted down by Landsmen.

Queen Adran is convinced that someone's hired an assassin to kill the heir, Aydor and she wants an old friend, Merela Karn ( arguably the best assassin in business today!) to uncover the plot and expose both the assassin and the traitor within Castle Maniyadoc. Along comes Girton Clubfoot, all of fifteen years, apprentice to Merela and dedicated to the cause and his master like no other. Girton uses a cover, that of a distant noble's third son to get in with all other squires training to be knights along with prince Aydor. Using this front. Girton slowly starts to weave his way through the darkest corridors of the Castle to uncover clues that might lead them to the real traitor. In this process, he uncovers a lot more than what he's bargained for, falls in love with a stable-hand, makes friends with an inept outsider and makes a lot more enemies that he has ever had, in his young life - discovering secrets not just within the castle but also within himself.

It is a lovely book - one of my easiest and fastest reads in recent times. The plot starts off as a straight-forward whodunit veers off into the darker territories of a murder mystery and then erupts into a full blown crown conspiracy and bloody battle by the end of it. Never a dull moment, the story unspools from a first person narrative as Girton conducts his master's investigations within the Castle frequently venturing off-script to unearth new clues. Featuring a full blown rich cast of characters headlined by Girton and his master, Merela I found myself warming up to young spunky Girton quite fast. And so with the idealistic strict Master. Every Assassin story features the master-apprentice  relationship but I found Girton-Merela to be just more than a mere teacher-pupil duo. Their love and fondness goes much beyond the principles of violence, Merela having rescued young Girton from the slavery long time back. Merela is almost a mother to the young man and their loving relationship comes off as natural and essential to the plot.

Girton would die for his Master, follow her blindly into anything but definitely has a mind of his own. Prone to the angst of growing up, emotional turmoils, sullen episodes and also quiet moments of reflective thinking about his life and where fate had led him to. There are some great moments of true-blue friendship between Girton and this character Rufra - another outsider training within the Castle Maniyadoc yearning for the love and support of a friend. And then there is the fresh and bubbly romantic interludes between Girton and Drusl, a beautiful stable-hand whom Girton gets close to. As with any "coming-of-age" protagonist, Girton bears the brunt of being bullied, teased and beaten up by the bullies of the class - this time, the hedonistic heir Aydor and his sadistic cronies. Oh did I mention, Girton is disabled - mage-bent with a club foot but under the training of Merela, Girton ably proves that he is much more than just his disability.

The world building is limited but still impressive - Barker paints the desolate grim times in the aftermath of magic gone wrong of a hapless world where the courage of a few will change fortunes. There is a beautiful backstory of Gods and how they all perished except for Xus, the God of Death performed as a play by a Jester ( which is Merela's cover within the Castle) I am hoping the further books will help build out this amazing world even further. The book is paced very well and there are slight twists and treacherous backstabbing as is wont in an assassin story. Barker's writing is accessible and easy to get into and then he throws in these amazing little gems, truisms about the hurts and hopes of life that stay with you long after you read the book.

One of the best debuts of 2017, RJ Barker's first book in the Wounded Kingdom trilogy packs a lot of heart in that assassin's tale we thought we knew very well. While it does nothing to push the boundaries of this genre, this is totally one of the most adorable assassin stories I have read in a long time. I had such a wonderful time with Girdon and Merela that I cannot wait to get back into Wounded Kingdom book.
2017 Books Assassin Book Review Epic Fantasy RJ Barker