Gates of the Dead by James A Moore

January 12, 2019
So James A Moore continues to smash all the rule-books of "how to write epic fantasy" with this lush, absolutely mad, terrifying conclusion to the series, Tides of War - with this third book, Gates of the Dead. 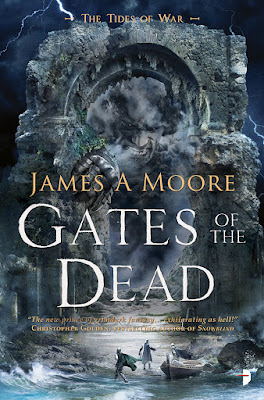 If you been following me or the series, then you should know James' new series has been a raging favorite with me over the past two years, 2017 & 2018 - with first two books in the series being absolutely bonkers and so much fun to read. James gleefully takes an axe to the norms of writing by skewering conventional tropes - I mean, where else would you find the protagonist surging in and killing the followers of a set of blood-thirsty capricious gods' - for having kidnapped & sacrificed his family, right in the beginning of the first book of the series! This in itself, would be fodder enough for a good three book series. But no, James blows your conventional expectations away to kingdom come - and churns out this mad tale of vengeance that spans across many dimensions including the impossible tale of Man versus God and then branches off into themes of slavery, demons, immortality and divinity.

Over the course of two books, James has introduced a multitude of characters and unless you start maintaining an elaborate excel-sheet with the storylines, you would get lost. But that is okay. That is the point of his writing. He ropes you in and then without warning,  rips away all your support-lines leaving you floundering and spluttering as the tsunami of trouble builds up and drowns you, leaves you gasping as the tides just keep going up and up. There are deaths galore; After all, the whole world is ending with the angry Gods throwing pestilence, madness, floods, lightning and every single apocalyptic pre-cursor onto the world. Cities are razed to the ground in a snap, raging fires and the raging sea compete for the death toll. So I must warn you that if you haven't read the preceding two books, then you would be hopelessly lost. And of course, a refresher of book two would help immensely as it's been a year and I found myself racking my brains, about the storylines of a lot of the secondary characters.

Brogan McTyre has declared an all-out war against the Gods, having helped to kill One of them inside the mountains and now, is sailing out to the North - to find the Gates of the Dead which leads into the Gods' own domain. Brogan's single-minded quest still remains the focal point of the story but James has had many an interesting diversions' - bringing into this mad fray, allies for Brogan in the demons and the sorcerers of Gallea who could help turn these tides in his favour. In particular, the demons who have meddled into the world hiring on their human soldiers. Make no mistake, this one's a dark tale. Sordid and grim in its treatment of human life - nothing more than broken toys in the wily schemes of arrogant Gods and cunning Demons and yet, you can't but hold a grudging respect for this small bunch of foolhardy, battle-scarred veterans on an impossible mission. To end this war by killing the very Gods.

The story picks up in the last city of Torema where Brogan is reunited with his ragtag friends, who started off this impossible quest including Harper. A few of them are lost and there are a few new allies and a lot many enemies who are reunited. And this forms a pattern through the book as Brogan fights multiple odds and multiple enemies to get to the ultimate prize. My curiosity as to whether or not. he would toppled the Gods or how he planned to do it, kept me invested through the ups and downs.

In terms of pacing, as usual with all other books in the series, it is a mad gallop taking no prisoners. The fight scenes are rabid, swarms of enemies flocking down on our hapless heroes. The He-Kisshi, the fearsome horrors who are the messengers of the God lead this flock. But James lets his crazy imagination rip - there are other unspeakable horrors who vie for your attention, nightmares who have to be 'read' to be experienced. I did find the plot a bit wearisome at times and repetitive as Brogan keeps repeating to himself, his motivations for this war. Harper, my favourite character is back in the series with his own POV but only plays a second fiddle as this book is all about Brogan's impossible mission that is finally hitting the home run. Some of the characters introduced previously meet a gruesome end, not really serving any purpose towards the end-game. Book-3 sadly, would probably be the weakest in the series. We knew the end times are near and while, all things get tied up pretty well I just felt a bit disappointed in terms of how fast everything just climaxed and broke apart.

But all things considered, this whole series has been such a fun, tall tale of vengeance - melding fast-paced fantasy action with gut-churning horror in an unimaginable manner, a swirling chaos of a plot that could only be pulled off by one as talented as James. Tides of War has been my first James A Moore series and I know, I am in for the long haul with him. A fan for life.