Fallen Gods (Tides of War # 2) by James A Moore

January 14, 2018
James A Moore continues to push the boundaries of the grimdark genre - with this rousing sequel to the brutal and savage The Last Sacrifice, a spectacular start to the series, Tides of War. Fallen Gods continues the story of Brogan McIntyre and his rebellion against the blood-thirsty Gods. In a bleak, violent world where the Gods are capricious and irascible, one man defies them by denying them the blood sacrifice of his family and brings on the everlasting fury and wrath of the Gods - Pitching the whole world into an apocalyptic storm that threatens to drown the whole world, one city at a time. 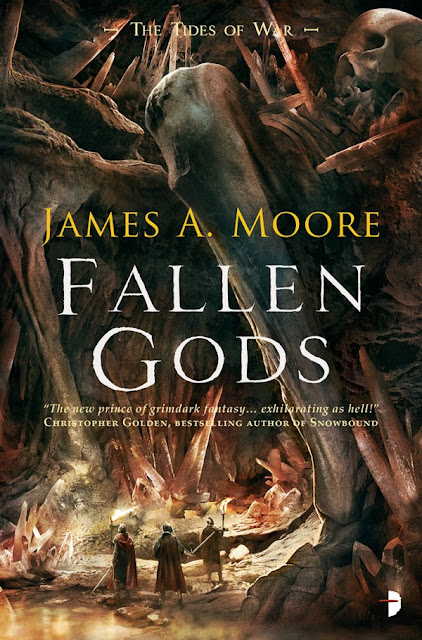 Seriously, what a phenomenal second book! Everything that was so delightfully dark about The Last Sacrifice, James just wraps those thorny vines tighter around the plot. He proceeds to deepen it to a gripping degree throwing in mindbogglingly twisted horror elements. The plot goes absolutely bonkers - the Tribulations of the Gods are destroying the world, hitting one city after the other within the Five Kingdoms. There are demons in the fray - vying for a piece of that crumbling pie. The seeds of the demons are manifold and horrific, in ways unimaginable, in different shapes and sizes. The vile Undying, the pale-skinned Grakhul, the abominable slavers, the harrowed fugitives, the Marked Men - they are all back for another round as the world around them is crumbling. Lashed with the rising flood waters, struck by the raving madness and pelted by the apocalyptic storms, the Five Kingdoms is all but in name. And in the midst of all this, one man continues his journey to the rugged mountains of the North, the Broken Blades in his quest to end the Gods before they kill the world.


Crazy as it sounds, this plot actually works. The pacing is relentless , right on the nose and with the insane number of characters in this sequel, you would feel like it's all coming undone at the seams but hell no. There is a lot more world building in this one as the characters embark on their own individual journeys for their personal salvation. Some are out to save the world, others to cement their prowess in a new world order and the rest just obeying the will of the wrathful Gods, hell bent on destroying the world. We pass through cities ravaged by the rising flood, cities gone mad with zombies devouring their own kin and the kings, in their final bid to save their kin and their kingdoms under siege, give into the whispering of the demons.


As I said before in my last review, there are absolutely no heroes in this quest. The apple-cart of morality has been upturned and kicked far away. The motives here, are all dictated by greed - for power, for money and for that desperate need to just survive. Brogan's character splits away from his best friend Harper to seek the secrets buried beneath the Broken Blades. If there is one character you still root for, then it's this guy - having lost his family to meaningless rituals, even revenge is not the reason driving him on now. It's just that he doesn't have a choice. It's his quest or the end of the world. And what he discovers inside the mountains after days of claustrophobic horror, could possibly change the world's fortunes. I had wished I could be inside Harper's head - the calm unruffled bastard who only lives for the battles. Harper's POV turned out to be quite bland, as his situations are all about leading his men to safety, to keep them alive till Brogan succeeds. So beyond the battle situations that he's got no time to think beyond dodging past the axes or the swords. The others from the first book - including Liam, Tully, Beron - they all have fleeting moments but none that would turn the tides of war (Pun!)

Anyways - while the book may not be big on characterization and the plot wheels are turning crazy in different directions, I trust James to get us ashore. Some plots are poised at interesting inflection points and I definitely want to see which direction they turn. Fallen Gods continues what started off as an impossible romp in The Last Sacrifice. The insanity, the swift and savage violence has reached a new level of brutality while everything is fair game since everybody's neck is on the chopping block. I am still rooting for the death of the dark Gods. And as the Tides of War rise high in Book#3 - I am taking the crow's nest to get a good view of what lies beyond.
2018 Books Book Review Epic Fantasy James A Moore