This week on our Waiting on Wednesday feature - our infrequently recurring meme to celebrate the best of anticipated titles in SFF - we feature the amazing Carter Archive noir fantasy series set in the gritty and brilliantly realized town of Titanshade. Yes! Carter and his friends are back for another adventure as the third book, Titan Song by Dan Stout releases in April. 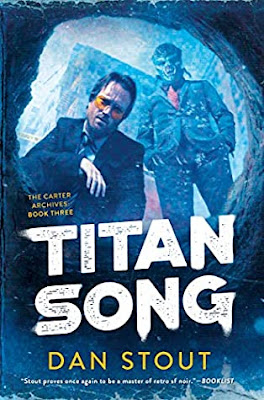 The third book in the acclaimed Carter Archives noir fantasy series returns to the gritty town of Titanshade, where danger lurks around every corner.

With the return of spring, new life floods into Titanshade. The sun climbs higher and stays longer, the economy is ascendant, and ever more newcomers arrive to be part of the city's rebirth. Even pop culture has taken notice, with a high-profile concert only days away. When a band member's murder threatens to delay the show, the diva star performer demands that the famous Detective Carter work the case. But Carter has secrets of his own, and his investigation unearths more victims and dark secrets, triggering a spiral of deceit, paranoia, and nightmarish magical transformations.

As conspiracies are exposed, Carter is sucked even deeper into the machinations of the rich, the powerful, and the venerated. Soon the very foundations of the city threaten to collapse and Carter's own freedom is on the line as he navigates between old enemies and fragile new alliances while racing to learn the true cause of this horrific series of deaths.

Alice said…
Getting reviews is very difficult for an Indie author. https://usbookreviews.com/ is an affordable service to get high-quality reviews and gain visibility for your book.
March 17, 2021 at 4:49 AM