The Guest List by Lucy Foley is my first book by the author - a mystery whodunit that am reading after such a long time - and definitely the first of her many other books, I have decided. With strong shades of Agatha Christie about this mystery novel, The Guest List was one of the best-sellers of last year and with the right good reasons to be. 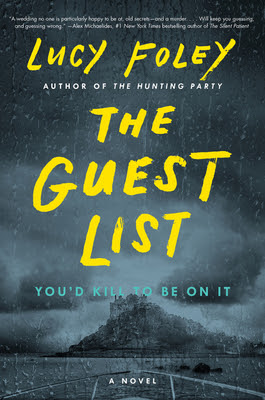 The intriguing premise here is that of a 'destination' wedding happening in a remote island off the coast of Ireland where Jules, a successful entrepreneur is about to get married to the man of her dreams, Will a rising TV star. The story starts off on the wedding night where the storm is blowing in and a waitress discovers a 'body'. And then we start peeling off the layers to figure out who the dead body 'was'. That's of course half the fun, the main part being the grubby grimy details of the past of the main guests who have been invited for the wedding. Watching the sordid past come alive in their own words as we ponder on the identity of that dead body. Because as the layers come off, we gleefully realise that all the main POV's have enough motive to 'kill' or be killed.

The Guest list consists of friends and family, a small bunch close to both the bride and the groom. The main named characters are: Olivia, the bridesmaid and Jules' stepsister who is an emotional wreck coming off a breakup with her boyfriend. Then Johnno, the best man and Will's (supposed) best friend from his School days - a man dealing with his own abject failures in life and multiple secrets he shares with his best mate, Will. Aioffe, a kind of neutral POV who's the wedding planner and who owns the castle on this island where the wedding is about to happen. A bit nervous about all things happening including the boisterous rowdy gang of Will's school friends' (The Ushers) and of course the gale storm forecasted to hit the island later. Hannah is the 'Plus One' married to Charlie, Jules oldest friend who is on this trip to 'rekindle' the dying romance in their relationship but who's nervous about how Charlie is starting to act strange and insecure in front of both Jules and Will's posh school friends.

It's the perfect setting for murder with each of these characters' past slowly getting dug into, their jealousies, insecurity and general mistrust of each other boiling to the surface as the tension ratchets up. Lucy successfully employs the twin-timeline structure, leading us to the discovery of the body on the night of the wedding and also, switching back to the events leading up to the murder, starting with two days past. The skill is in getting us to care about the characters, making us scratch our heads as to the identity. Because each of these characters are very well written up, a delight to read, however heinous or distasteful their pasts are. In fact, apart from Hannah ('who seems kind' ) all the others including Jules are not really the 'likeable' sorts in real life. And yet. their past seems to draw us in, moth to the flame, as a lot of skeletons in the closet come tumbling out. (I do not have much complaints except a little bit of a suspension of disbelief towards the tumultuous climactic chapters as we rapidly switch POVs and the manner in which a lot of these clues and backstories happened to converge. A bit unlikely, over the top but hey, that actually was the fun part!)

If you love your murder mysteries, have grown up on Agatha Christie staples where the setting is remote, cut off from the rest of the world and the characters all wily, twisted and multi-layered, you will absolutely love Lucy's modern take on this. A shining light unto the darkness that exists within all of us, the sins of pride that make us human and how sordid secrets can bring about a fall thereof. I had a blast listening to the audio book with the multiple voices, very immersive and recommended.

Alice said…
Getting reviews is very difficult for an Indie author. https://usbookreviews.com/ is an affordable service to get high-quality reviews and gain visibility for your book.
March 14, 2021 at 11:44 AM