The Forever Sea was one of my most-anticipated releases for the year 2021 - Billed as an "Environmental Fantasy" - this is the debut of Joshua Phillip Johnson and came out in the last week of Jan. 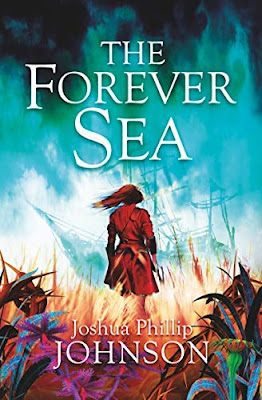 A sea of grass that runs for ever, ships running on a magical hearthfire, tended to by the magically-abled 'keepers', a mythical land called the "Once-City" with that retains the secrets from the old ages, monsters galore - and pirates on the sea of grass. It is a blockbuster mix of heretic ideas, blended in with lyrical almost poetic language and a narrative that promises adventure, mystique and a lot of fun.

This should have been a book I loved to bits and gone to town about. Alas, it was not to be. I am kind of disappointed with how it finally panned out, maybe because my expectations were stratospheric to begin with. It's not a bad book at all but despite a strong beginning, one of the most gorgeously detailed world building and innovative magical systems that I have had the pleasure of reading in recent times, The Forever Sea sadly, turned out to be not my kind of book.

The story starts not from our protagonist Kindred's point of view, but that of a mysterious story-teller who has just arrived back at a settlement in an unknown time-frame, where people huddle together in broken down hovels and are at the mercy of nature - and mythical monsters in the dark. It is the storyteller who begins the tale of the girl who dared to defy the rules - and go on a quest set upon her by her mad rebellious grandmother.

So Kindred, as we are introduced to her, is just coming off a two-year duty aboard this new ship Errant, having survived a pirate chase and having successfully saved all their lives with her unconventional approach towards magic and tending to the 'hearth-fire' that powers the ships. But back on Arcadia, the island that is just beginning to deal with a lot of problems like insider-politicking, lack of water etc, she gets the news that her grandmother - one of the most famous captains on Arcadia - has just disappeared into the 'grass' below.

But Marchess, her grandmother was always different and she leaves her grand-daughter a mysterious note that clearly implores the young girl to find her way ( back to Marchess, now lost somewhere beneath the grass) because that is the only way to get back to living in harmony with nature and perhaps, save all from an impending doom. How Kindred goes on this quest to be re-united with her grandmother and get answers to the questions exploding in her curious mind, forms the majority of the narrative.

First the positives - This is an exceptionally well-crafted world that Joshua throws us into. Despite throwing us right into the thick of things, Joshua expertly and organically builds out this wonderful world borne on this forever sea all around us letting us soak in to it. The Sea of Grass, the various people, the culture, the amazing magical system, the trades, all of it is very well detailed and immersive. The majority of the writing focuses on Kindred and her relationship with 'fire' because of her magical ability to converse, connect and control fire that powers the ships. There are these fabulous scenes featuring pirate fights where Kindred has this unique responsibility to set the 'beat' of the fight just as she controls the heartbeat of the ship out in the wilderness.

But peeling back layers beyond the world-building or the magic and stepping away from the wonderful quality of Joshua's writing, it all starts to feel a bit too over-done. The details get a bit overwhelming as we focus on Kindred's struggle with the fire or her quest that starts to unravel mid-away and slow down. Kindred's characterization as well, isn't quite the easiest to bond with. I didn't really find much to like about the young resolute girl, apart from her fascination and bond with the fire. The rest of the characters, like her captain or the rebellious grandmother or the stand-in captain Little Wing etc, get too little time on the pages for us to even get a sense beyond this thin facade that Joshua paints. I felt there was a lot of fluff in the story itself, bogged down frequently in its pacing and inconsistent narrative structure that didn't let me get a rhythm for the reading. The dialogues were too sparse - and a lot of it, just repeated over. But if you get over that plodding style of detail-dumping about the exotic plant life on this fascinating world and can get behind this unpredictable protagonist, then there is something in here that you may like.

The author certainly tackles a bold new topic on the conservation of nature and our environment, painting out a grim picture of this cost of negligence towards mother nature. Also freely subverting the tropes of "Men at Sea" - by making pretty much all the sea-faring sailors to be women here, who are Kindred's compatriots.

It's definitely a worthy addition to the evolving "hope-punk" sub-genre and certainly Joshua Phillips Johnson might just be the flag-bearer of this. I unfortunately was put off by the pacing and the over-indulgence on the details of this brilliant new world. But am sure, there will be takers for this kind of book, among the genre-lovers.