We are the Dead is Mike Shackle's genre-busting debut that straddles a thin line between grim-dark and heroic fantasy, that came out in 2019. I am late to this party, but with the Fool's Hope, the sequel to this Last War trilogy coming out soon, I thought I had to jump onto this one. 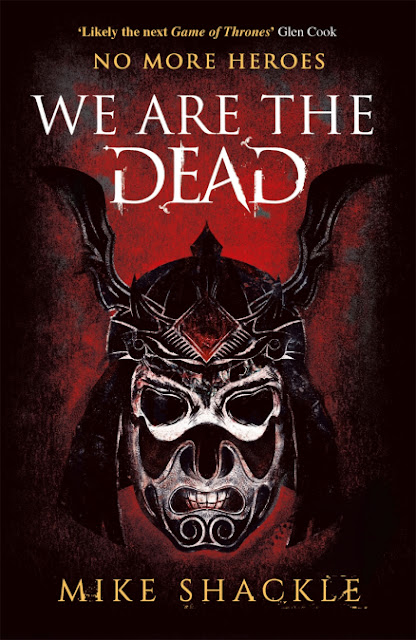 This is a book on post-war trauma, about unlikely ordinary people stepping up to start a bloody revolution against the oppressive new tyrants. It's a grim book that details the depressing state of affairs, in a country ravaged by war, famine and poverty being the only tokens allowed for the occupied, to eke out a sorry excuse for living. And as the title states categorically, there are no "heroes" left to come sweeping in and save the day. It is left to a coward who failed her military vows, a young boy gone crazy with grief and who doesn't see the difference between a friend or a foe, a maimed one-armed army general and a fierce protective selfish mother to mount the beginning of a feeble resistance.

The story is set in the empire of Jia, a proud empire ruled mainly by the military might of soldiers known as the Shulka, trained to protect their clan and empire at the cost of their own lives (and hence, the motto, "We are the dead.") - who dismissed the threat from their neighbouring empire Egril, crushed and defeated  repeatedly in the past. But the Egril have found a new Emperor, Raku - a mythical leader descended directly from their God Kage themselves, an old magic mastered by their Chosen and together, they storm the walls of Jia and the seemingly indefatigable Shulka are crushed within days. All of this happens in the first five chapters itself. And we are introduced to the four main characters, within the Jia empire - and how their world crumbles in a moment's notice. Six months past, the citizens of Jia are under the empire's rule. A cruel oppressive regime that allows for no real trade or commerce or the natural order of things that let an economy flourish. And from the ashes of this defeat, four different people, as far removed from each other as possible, rise up - each buoyed on their own sense of hurt and their own twisted needs of setting the wrongs right, to challenge the might of the Skulls (so called, for their fearsome masks, like a Japanese Kabuto mask so beautifully done on the cover page of this book!)

Tinnstra happens to be the unfortunate daughter of one of the bravest leaders of the Shulka but she herself is a coward. And just wants to hide, survive the horrors and eke out a miserable existence for herself. Till the day her "dead" brother lands back in Jia - and drags her unwittingly into one of the biggest conspiracies to save the King of Jia, to be secretly smuggled out via the sea-route to their neighbouring empire of Meigore. Then there is Jax, who never stopped believing. A former Shulka, now just a cripple having lost his right hand in the first days of the invasion, he is the secret leader of a resistance movement called the Hanran, a spy network working to extract their King safely. Yas the third main POV is a mother of a young boy whose only meaning in life, is to provide for Little Ro and she takes up work within the Governor's house - which is the stronghold of the Skulls inside this district. A dangerous workplace, where she is apt to get whipped for the slightest mistake but she is willing to take the risks for the food and the money. And lastly there is Dren, a young boy who loves running along the rooftops of his home-town and going fishing with his dad - but after having lost his parents in the bloody invasion, he goes crazy with grief. And he has only one burning ambition left - to murder all the skulls left alive, no matter what the cost. How all their lives collide as each of them in their own twisted little way, stand up against the injustice and the brutal regime of the Egrils to spark a revolution forms the main narrative of We are the Dead.

So Mike's debut has been praised to the skies and perhaps for all the right reasons. He spins an unlikely tale that starts with the big bloody war and then spirals downhill to center down on the miseries and the tortuous life of the occupied citizens of this defeated empire. None of the central characters are even remotely likeable, but the story spins out in a new direction as the miseries pile up one atop the other forcing these impossible bunch of men and women to take a stand. And how would these insipid bunch of cowards and cripples topple the all-powerful Skulls, or at least get a start on how set the revolution in motion, I was very curious to see how this would shape up. That is what kept me reading - despite the fact that I loathed all the characters equally. Sure there is character development, mainly for the coward Tinnstra and crazy Dren. Tinnstra goes through so much in these eight days, and finds her will to stop acting like a coward. Especially when charged with the safekeeping of the heir to the Empire, Tinnstra has no other choice but to dig deep and gather her resolve. But till she finds her nerve, she makes your ears bleed with her incessant whining about, "Oh I am a coward, I cannot do this." And that goes on till well past three-fourths of the book.

And then there is Dren - oh my God, I have not encountered a more detestable character! A young boy, hardly fifteen or so. He is insufferable, with his big-boy mask of "Oh I am strong, I will kill all the fucking Skulls, so do what you can, 'coz nothing can hurt me." But thankfully his arc of redemption is rewarding enough by the end of the book. I still cannot go on to say that I like that kid, who's got a death-wish and walks a tightrope all the time but he is a daredevil who is good to have on your side of the ring, for sure. There were quite a few heart-thumping moments of blistering action scenes - as these minor factions fight back against the Mighty Skulls, where I frankly was fist-pumping with delight.

The Skulls, the enemies are portrayed in a shallow manner but the minor POV of Darus, one of the Chosen who like their magicians/shamans, imbued with different sets of powers ( Darus can heal, himself and others - even bring back the dead!) allows the author to do a sketchy history of how the world came into being and touch upon the manic faith that inspires the Skulls onward. Darus is the impossible antagonist the miserable bunch are up against - and his character strengths are clearly etched out - a love for violence, an extremely huge ego and a never-ending thirst for torture. Yeah, there are quite a few 'strong' scenes of torture in the book, so the faint-hearted are warned in advance! The other big complaint about the book is the prose itself. Mike's prose is workman-like, keeps you invested but it never did "wow" me or win me over. In fact, the first time I read the book, I gave up at the ten-percent mark. But then the story won me over and I kept getting sucked into this highly original plot.

The other thing I loved, is that the pace of the book never falters. Swept me along like a storm-tide, and while it bobbed up and down, it never did get too trying or boring. There is a lot of crunching action, a bit of intrigue, very strong magic and the ever-present underdog-feel to the resistance that basically makes you care. Not individually for the flawed, unlikeable non-heroes but for the whole resistance itself. Mike deftly paints  up the picture of a nation on its knees, yoked and shackled, suffering and miserable. And so we want to see this proud nation back on their feet. And oh, the Shulkas? the ones who chant We are the Dead all the time? Well, they aren't all that dead by the end of the book one and despite, not really caring for these revolutionaries, I do want to see how the second part of this Last War is going to play out. Fool's Hope releases soon and I have heard the sequel is much better than the first book, which is great news! Recommended.