If you, like me, are stumped by the unexpected Diwali rains, and are surfing aimlessly on Netflix or Prime, then let me suggest an absolutely well-made movie about an underdog triumphing against the sky-high odds (pun intended!) story - called Soorarai Pottru, on Amazon Prime Video. 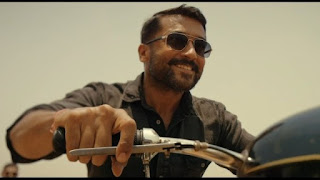 Inspired by the aviation stories from "Simply Fly" by Captain K Gopinath - the pioneer of low-cost aviation in India, this movie is a dramatised version of his realisation of this impossible dream, a epic David-vs-Goliath story of how he moved mountains to achieve his dream and make India fly. With Suriya firmly in the pilot's seat, this movie doesn't just fly, it soars!  With his inimitable style and characteristic intensity, Suriya triumphantly carries through this whole narrative on his able shoulders, making us cry, cringe and then smile as he brings alive the pain and triumph of "Maaran", the man behind the impossible one-rupee air-tickets.

While yes the story remains true to how Air Deccan took to the skies and brought lakhs of Indians closer, there is enough drama that plays our against a gripping taut narrative, an explosive storyline filled with ups and downs to keep us hanging on for dear life, even as we mutedly cheer to bring this mad impossible dream to life. Up against adversaries with deep pockets, corrupt bureaucrats and wily venture-capitalists, Maaran the underdog keeps getting back up - despite repeated failures, to make good on his promise to himself and to the lakhs of people in the hinterlands of India ( the focus mainly is the villages in and around Madurai in this movie). On a dreary rain-soaked weekend, this movie is definitely the pick-me-up that you need. 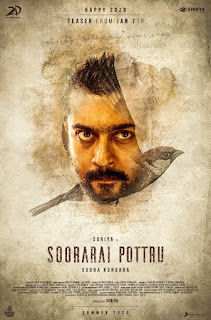 With Subha Kongara (Irudhi Suttru) behind the lens, there is a clear nod to feminism in this storyline ( Evident in several instances where patriarchy is shown the middle finger, and eventually the door! For example, right up front where we are introduced to Bommi, the spunky wife of Maaran played marvellously by Aparna Balamurali (Of the Maheshinte Prathikaram fame, where she did an impactful debut!) - when she is going with her entire family to Maaran's village to "see the groom"- Her defense being if she can be rejected by 20 other grooms, she might as well start doing the same. We know age-old traditions are going to be kicked in the balls right away. It is made clear that Bommi's dream of building a bakery is no less than Maaran's dream of flying. And we are made aware of this time and again - where a struggling Maaran always turns to his wife for support - both financially and mentally. Bommi's character goes through the grind of life, just as bad as Maaran's struggle against corruption, political-nexus, nepotism etc in an India from the early 2000's. 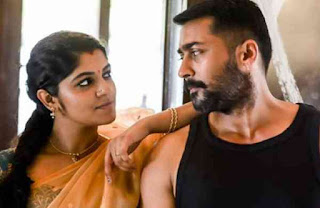 The evil "system" that Maaran is up against, is personified by Paresh Rawal's Paresh Goswami - a self-made rags to riches story, which he jealously guards and doesn't want emulated by upstarts like Maaran. If Maaran endeavours to bridge the gap between the rich upper-castes and the poverty-stricken lower-castes by having them fly the same airlines, Goswami scoffs at the idea and does everything possible to bring down his high-flying dreams. A walk-inthe-park act for the highly talented Paresh Rawal, he nevertheless makes a mark in this Suriya-starrer. 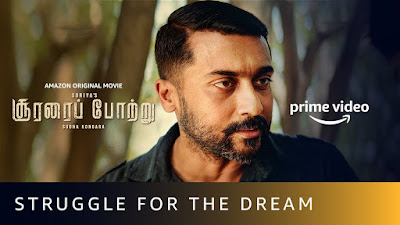 Coming back to Suriya - of course, what a relief to have this extremely talented and intense actor get back into his grooves, with a movie that does him justice. After the atrocious NGK and Kappaan, I am just glad that Suriya got a meaty role and a credible movie that allows him to really come into his own (once again!) What a fabulous actor. The throes of defeat, the insurmountable odds be damned - Suriya, the complete actor,  brings out the passion of this never-say-die dreamer. The glint in his eyes or the frustration and anger at the system that is trying to wear him down. His tryst in the Indian air-force, his rebellion to make the train stop at Shollavandan station, his tender and loving relationship with his misunderstood father and doting mother, his friendship with two of his best friends who leave their own dreams and families to make his dream come through - Suriya adds gravitas to all these nuances of Maaran's character, something that I feel no other actor could have done justice. Aparna Balamurali holds her own against the powerhouse talent of Suriya - and their equal-footing relationship including the romance and the marriage, is definitely a highlight of the movie.

The movie at a little over two hours, may seem a longer than what we bargained for, especially for home-screen viewing. But trust me, the roller-coaster ride that Maaran goes through before he tearfully realises his dream by the end of the movie, is totally worth it. This is a biopic that earns its wings,  giving us a hero we can believe in, one we aspire to be. A fallible flawed common man, whose belief, grit and gumption takes him past the finish-line, bleeding, broken and crying, but a winner. All the way. The inspiration we all need in our lives.