The Drowned Cities by Paulo Bacigalupi

Paulo Bacigalupi for all the awards and citations that he has won, for some reason has flow low below my author radar. I have three books of his, including the acclaimed debut Windup Girl that's been gathering dust on my shelves for a while now. No, really it is my fault and just that my TBR has always been bursting at the seams but I think, this time I deliberately took a break to just start reading this YA book, Drowned Cities - companion book to the award-winning Shipbreaker - and trust me, I just got effortlessly sucked into the grim and action-packed story set in this futuristic America, reduced to a set of drowning cities subject to global warming and an ever-present war going on. 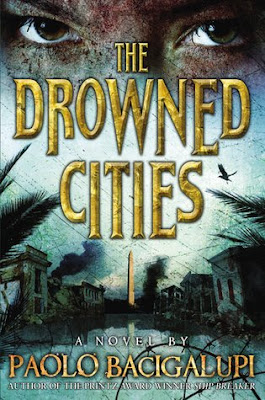 Paulo's writing is like a sucker punch to your gut. Here, he masterfully crafts up an absolutely bleak futuristic world, a make-believe grim world, devoid of hope, ravaged by constant war, pointless deaths and mindless destruction. America has devolved into multiple strongholds and cities - but for majority, the coastlines have disappeared with the oceans having flooded cities following a rampant global warming. China is a global super power, trying to broker peace among the warring factions within these cities but eventually having to withdraw in the face of the constant guerrilla warfare and the rising ire of the so-called 'patriots' who are led by multiple leader-figures, high on propaganda but spread thin on resources or arms.

The story of Drowned Cities is about war - or rather the after-effects and the futility of the same. The horrors visited upon the survivors of a constant war that is going on, is brought out in a fairly graphic manner - Paulo hinges his story on his main two teen protagonists. Mouse, a young licebiter farmboy who has lost his parents to the invading militia groups and his best friend Mahlia, an orphan victim of the same invading militia who has her hand chopped off for being a "castoff" (She is of mixed race, with a Chinese general for a father, and her mother from the Drowned Cities - who fell in love when he was stationed within the cities as part of the peacekeeping forces but who had to leave in a hurry in the face of the rising wrath and warfare by the "patriotic" militia groups.

Both children are on the verge of adulthood, grew up on the fringes of the Drowned Cities all their lives and never quite fit in. The 'citizens' of Drowned Cities themselves are a raggedy poor bunch, scrounging for basic living needs, clean water or medicines for their diseased. The only doctor brave enough to survive these conditions Dr. Mahfouz however, is a foolhardy man, too naive and optimistic about the untrustworthy human nature. The reason Mahlia and Mouse are still alive - are because of this man's tenacious efforts despite the war-boys. Now the narrative gets a shot in the arm right up near the beginning with the introduction of this augmented war-soldier created perhaps by the genetic scientists of China - who has just escaped his captors in the fringes of the Drowned Cities but is too injured to complete his escape.

The war-soldier augment named Tool meets up with Mahlia and her friend Mouse, in the swamps looking for food. Tool captures Mouse - and threatens Mahlia to get back with the meds/doctor for him if she even wants to see her best friend alive. Mouse escapes - but heads straight into a trap set for by the UPF, the latest group in a series of many who now claim control of the cities. Teenagers playing at soldiers, armed with machetes, bottles of acid and the occasional gun. Their squad lead, a Sergeant Ocha himself another boy from the fringes who got recruited, takes a liking to the tough survivor kid, decides to recruit him.

Mahlia meanwhile developed a strange kinship for the 'war-dog' Tool, saves him with her medicines and together they plot to go back deeper into the Drowned Cities to retreive her best friend, Mouse. Because time and again, Mahlia is reminded of the fact that the day the militia came invading and chopped off her hand, it was Mouse who helped save her from a certain gruesome death. How they infiltrate into the heavily guarded militia patrolled areas within the Drowned Cities becomes the central part of the narrative.

It's an explosive book - full of action, suspense and thrill rides. Paulo couldn't have written a word wrong here, even if he tried. His prose is energetic, crackling with verve, writing up a storm that teeters over the edge into a full blown Hollywood climax deep in the Drowned Cities against the backdrop of an erstwhile Palace, run to ruins - with two different militia factions raining fire on each other and the man-beast Tool also entering the fray in murderous rage, wreaking havoc among the soldiers. We come to care deeply about both Mahlia and Mouse, both victims of war - one conscripted by force to serve in a military group ill-equipped and ill-trained for a war, the other having suffered misfortunes her entire life, finally entering into the devil's bargain with an unknown ally - to secure her uncertain future.

For a YA novel, Drowned Cities is fairly brutal - throwing us off the edge of that precipice, giving us a war-torn world run by ruthless soldiers who do not know what they are fighting for, where the value of life is almost non-existent. It's a fearless work of a master expanding his craft - and am for sure, going to pick up a few of Paulo Bacigalupi's brilliant works.