Oct 23rd will see the goons of Mirzapur take over Amazon prime in India, once again. ( Oh it's so happening now, am guessing!) 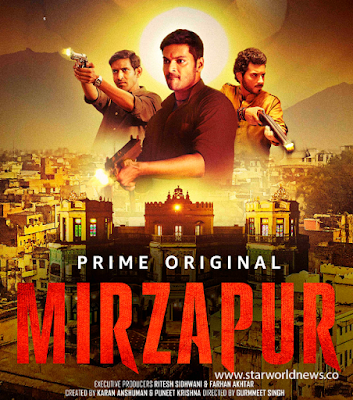 Season - II premieres on the platform and Prime is pinning its hopes on this ultra-violent, gripping series focused on the caste-and-politics based violence of the UP Hinterlands to bring an extra shine to their overall festive season dominance.

I managed to just about catch up on Season-I on time before the new season arrives - and while it may have its flaws in being morally decadent and perhaps a  questionable story-telling style etc, I was frankly hooked on to this. For a good day and a half, over the weekend. I literally 'binged" on the nine 45-minutes long episodes of the first season, hanging on for dear life as the businessmen, politicians and the goons played havoc with each others life, each episode layered on with enough profanity, gratuitous violence and sex to last TV viewers for a full two years ( This first season released in 2018 and finally has a second season after that extreme cliffhanger scene!)

The narrative follows the fate of two brothers, Guddu and Bablu in their "coming-of-rage" story as they face the grind of life, forced to take tough brutal decisions, bereft of much choices in this small town called Mirzapur that represents everything that is wrong with the UP Hinterland. The first shot is that of a caption, "Kaleen Bhaiya - King of Mirzapur" on the front bumper of this open-top jeep. Here's where the characters get set up : Akhandananda Tripathi (Love all the character names, very earthy and organic sounding names true to the tradition and culture of such a place!) Business Man and Don, the uncrowned king of this place who rules by fear. The prince, and heir to this large lawless kingdom is Munna, a wayward, impatient and unruly young man who doesn't think twice about whipping out his gun in a crowded marriage party and shooting down the groom (an honest mistake, of course!) Rounding out the ensemble is a hapless sexually frustrated wife and a crippled father who loves watching 'predator' programs on Discovery/NatGeo.

On the other side of the line are the two "pandit" brothers ( there are quite a few allusions to caste/religion throughout the series) whose father is perhaps the only embodiment of "good" in this decadent town. An honest righteous lawyer who wants to fight the evil by law - but lets his family down by frequently exposing them to the dangers that come attached with such daredevilry attitude. Guddu is the older boy, interested only in bodybuilding and winning the title of Mr. Purvanchal while Bablu is a topper in accounts in college and aspires to go for civil services. Circumstances force the boys into a life of crime and they keep sliding right into that bottomless gorge.

I confess, I was hooked on right from episode one. Perhaps it was the superlative performances - chiefly Pankaj Tripathi - the don who holds sway over the town as the King, is one of the finest actors we have today. Despite the obvious inspiration from the Gangs of Wasseypur school of movies, Pankaj's character of Kaleen Bhaiyya aka Akhandanada Tripathi is a far-cry from his portrayal of Sultan. [ More closer to his portrayal in the noir thriller, Gurgaon ] He brings so much gravity to this role of man, who while aware of his corrupt power and influence, is still in pain to control his wayward son and tries hard to not squirm under the influence of the greedy politicians who use him. Divyendu who plays the role of the 'prince' is in absolutely fine fettle - one of the under-appreciated actors in Bollywood today for sure. Drunk on power, his gunda act in the college, his wanton love for violence all show us the coiled depths of this man-boy's black heart. But then there are these brief interludes that shine light on his friendship with Compounder [Abhishek Bannerjee in a slightly under-utilised role but still gives a powerful portrayal ] - where he expresses genuine grief and enjoys true camaraderie, we kind of feel for him.

The 'heroes' if you want to call them that - The two brothers, Ali Fazal (Guddu) and Vikrant Maasi (Bablu) show us the gradual decline of middle-class values into the stygian depths of crime, corrupted by money and power. Now this was kind of my main issue with the overall story - I didn't find even one character to back. There are quite a few 'women' roles but except for Rasika Duggal, again absolutely mesmerising performance as the frustrated wife of an older gent, locked into domesticity in this "sharif khandaan" - the others were just pale paint-by-numbers kinda characters.

The extreme violence, the gratuitous show of blood [ like right in episode one, we have a factory worker losing both his hands while shooting one of the faulty guns manufactured in Tripathi's factories and then the King after having proved his point, casually driving over a dismembered finger, and then Munna walks into a wedding dance party and casually shoots the groom right in the eye! Just the tip of the iceberg as we are subjected to a lot more disturbing visuals as the story progresses and the tension hikes up] - might be jarring and the profane, coarse dialogues irritating, we just cannot stop watching it. It gets under your skin. Feverish anticipation for more, eh?

And now we know the story has taken a turn for the worse - we will be missing several of our favourite characters from Season I but heck, we cannot wait to get back out there. Revenge is not a dish served cold. We want it blazing hot, right off the stove and to be shoved deep down the throats of all those who wronged us. The last episode ended on kind of a cliffhanger, leaving us yearning. We now know, from the trailers that, the fuse has been lit for the fireworks to go ka-boom. We can't wait to get onto the front seats of that blazehouse.

Complains, well, there are quite a few. Barring the frenetic energy that Munna brings to the screen, the rest of the action scenes that don't feature  him, fall a bit flat. Which is why the ultimate showdown [ in a ironic full circle of life] that happens again in the middle of another marriage party - Divyendu absolutely smashes our expectations from him as he crashes in and takes on the two brothers. Bablu' and Golu's hesitant romance was better than the insipid, uninspired romantic dalliance between their siblings but the romance was always just an aside.  There are no "villains" to go up against the might of the Tripathi clan. The only "strong" competition gets killed somewhere towards the end of Season-I, with again an uninspired backstory and motivations. We only hope the proverbial "son" comes back.

So I know a lot of the gripe won't go down well with some of the hardcore fans of the "bhaiyya log" because in the heart of our hearts, in our basest form - we know violence is the answer.  Crime begets crime, a life that ends up all the way to the gates of hell. but as long as we get there bloody and exhilirant with a sky-high body-count, guns blazing hot, razor-sharp knives out and glistening with blood, we have earned our keep.

Anyways, there are several reasons why the Season - II is highly anticipated.Like how the narrator from Fight Club talks about Marla being a tumour, the little scratch on the roof of your mouth that would heal if only you would stop tonguing it, but you can't.

Mirzapur is our Marla. Our ride back into Hell. Belkum back to Mirzapur. 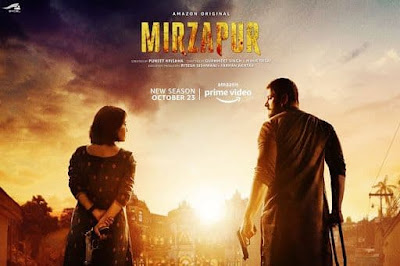