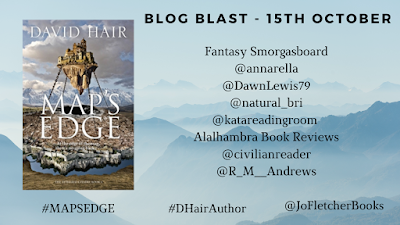 Happy Book Birthday to David Hair, his new book Map's Edge ( Part 1 of the Tethered Citadel) releases today, Oct 15th. Am really happy to be taking part in this blog tour for his new book - as David is a prolific writer, one of the most hardworking authors with at least three completed series behind him.
Map's Edge is his latest book, part of an exciting new trilogy with his characteristic deep focus on sumptuous world building, flawed loveable characters and wall-to-wall explosive action. The narrative starts off fairly straightforward and gets ahead by leaps and bounds with David cramming the story with all sorts of adventures for his main set of protagonists, till they get to their goals. It all starts with story of Dashryn Cowl who is masquerading as a 'physiker' in this rag-tag village of Teshveld at the edge of the Bolgrovian Empire. He and his teenage daughter Zara, are obviously hiding something and want to lie low. But a chance encounter with the empire commissioned team of soldiers and a 'cartomancer' who are tasked with charting the edges of the world so to help the Empire spread it's wings even further, blows his cover wide open. The soldiers turn rowdy - and Dash ends up killing them. But he also uncovers the cartomancer's secret findings that reveal a huge deposit of this mineral called "Istariol" that helps spark and sustain the magic in this kingdom - at the tundra-frozen edge of the known world. 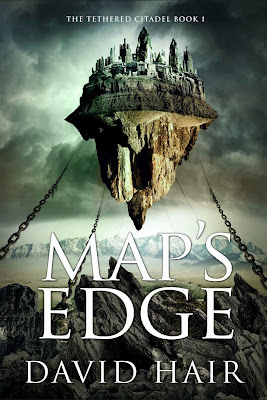 This is when Dash makes a wild gamble - to basically set out to mine the Istariol all for himself and puts together a rogue crew of men and women, all desperate and having a grudge against the Bolgrovians. Dash revels The narrative then picks up pace as Dash - or Raythe as is his real name, a leader of the original rebellion against the Bolgrovians and a wanted man with a reward to his head, leads this motley crew of villagers, mercenary knights and a set of hunters/trappers away from the comforts of civilisation, deep into the unknown uncharted territories - and hence, the name the Map's Edge.
What can I say? Map's Edge has been a swashbuckling adventure, teeming with explosive action, exciting magic-systems, fun characters all of this backed up by a detailed history of this strange wonderful world including the different faiths and Gods who hold sway. As is David's style, this is no low-fantasy. Magic and myths play a very important part in the whole epic and while there are predominantly two systems of magic. The older wilder form is rare and unheard of in the current world - after the last large upheaval of powers. And then there is Praxis, a sort of spirit-led magic where your 'kindred' spirit binds with you to give you destructive power that you imbibe, control and use for good. Our main protagonist Raythe is a praxis-sorcerer - and so is his daughter, Zar. There are countless dangers on the road which keeps the narrative always on the boil and frankly, quite fun. Some super inventive action sequences that involve plant-based ghouls, some predictable run-ins into 'cannibalistic' men - and the catastrophic elements of nature, including floods, snow and the like.
David's world building is exquisite, with different camp fire stories and hidden artefacts from the last age surfacing up, providing enough lull in the action, to have them unravel the layers of history that makes up this amazing world. Apart from the elaborate magic system, there is the question of faith and the Gods who dictate the rules of such. Raythe is our chief POV, the fearless leader who actually is a fallen nobility still seething for revenge against the outsiders (the blood-thirsty Bolgrovians). What makes him interesting is that midway through this difficult odyssey, he is torn between his greed, his grief (for an estranged wife, stuck in the enemy lands) and his new-found love for this 'found-family'. He comes off as a man of action, staunch in his beliefs and deeds. If I had to be a bit critical, I would call him sort of a straight edge and thus, a bit boring 'hero'.
He's mainly got two side-kicks. Vidar - a man who can transform into a bear when he gets angry ( how cool is that! Hello Bear-form of Wolverine!) and Jesco, the 'handsome rogue' friend of Raythe from his revolution days, who claims to be the best shot and the swordsman this side of the world. Jesco is a much more fun chap and brings in the much-needed levity to the grim travel-company. Female POVs - there are actually three main ones, including Raythe's feisty teenager daughter, Zar short for Zarelda just coming into her own power and discovering the nuances of Praxis-magic and her own spirit-companion bonds. Her chapters came off a bit YA - with her blooming feelings for the handsome knight errant Banno but these chapters gave us a great view point of how magic like Praxis evolves. Then there is the Mater, Varahana who is the voice of God to these villagers but is unconventional in her own manner. And last, there is the view point of Kemala, a disgruntled healer who comes with her own dark pasts and secrets. Each of them discover in themselves, their power and the choices to shape their own destiny and thus, affect the world around them. David skilfully brings out both the internal and the harsh outer world journeys that the characters undertake and for most parts, this is what makes the first book in the Tethered Citadel shine. Faced with dangers at every turn and competent villains, these unlikely band of renegades set up this extremely fast-paced read that hooks readers right from the beginning and keeps them on the edge throughout.
Map's Edge is the kind of fast-paced, fun read that mixes up the best of what epic fantasy has to offer. David has once again created an endearing bunch of toughies, up against towering odds stacked up, amongst them, bringing in myriad dangers caused by the vagaries of Mother Nature and traitorous human factions. This is an adventure set in a well realised world filled with magic and wonders, about an impossible journey undertaken by a bunch of renegades, stirring up the embers of a revolution. If you like your fantasy infused with magic, explosive action and rogue flawed heroes, Map's Edge the first instalment in an exciting new series by David Hair definitely fits the bill. Recommended!
2020 books Blog Tour Epic Fantasy