The Prey of Gods by Nicky Drayden

July 15, 2020
I have never read anything by Nicky Drayden before - Her bio claims 200+ short stories and 3 full length novels to her credit and it's a shame I just discovered her map-cap of a debut 3 years late. But better late than never and I resolve to set matter straight because this hyper-imaginative author is going right to the top of my must-read authors list after this blistering, too-weird-but-oh-so-much-fun genre-bending science-fantasy debut of hers, called The Prey of Gods. 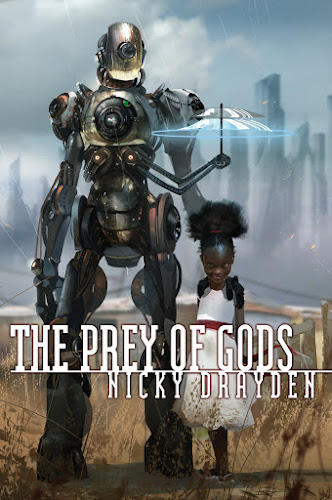 Set in the distant future, around 2160 the story is set in the town of Port Elizabeth in South Africa. The narrative spools out from five different POVs all of them unique and absolutely compelling by themselves: Muzi, a young teenage on the cusp of his adulthood with his confused feelings for his best friend Elkin. Nomvula, a young girl from the village outside the town who's blessed with secrets by the Gods themselves and who's secretly enamoured by this older man Mr. Tau whom her mother claims to have raped her, when she was hardly 11. Sydney is a demi-goddess moonlighting as a nail artist in this town, while biding her time to wreck havoc and claim her revenge on the mankind - for having forgotten the old gods like her. Riya is a pop diva, one of the global icons of the nation who also harbours dark secrets like her own issues with multiple sclerosis and  drug addiction. Rounding out the POVs is the political hotshot Stoker, who like all the others has his own troubles or dark addictions - a love for cross-dressing and a moony dream of becoming a singer, starting with perhaps opening for Riya's upcoming tour. Add to all this, the internal musings of this robot about to lead the rest of all robots in an epic AI uprising. Phew! Enough to rock your socks off. Nicky Drayden pulls together all of this, juggling some thirty seven balls up in the air, managing to do so keeping you well invested in the implausible plot that unravels and a wonderfully realised African futuristic community that leaps off the pages. Add to that, a snappy clever turn of phrase and rollicking pacing. it's hard to believe this is Nicky's debut novel.
The narrative is an absolute roller-coaster and Nicky never takes her feet off the pedal once the ball is rolling. Starting with Muzi's strained relationship with his grandfather Papa Fuzz, an absolutely colourful character who spins the most grandiose of tales about his adventures of growing up in a colonial Africa before migrating to the post-colonial South Africa and who insists on staying true to their roots of the "Xhosa" culture. Muzi while resenting this "pseudo" cultural heritage bullshit wants to remain true to himself - that means, openly accepting his own feelings for his best friend Elkin. The scene where Muzi and Elkin take this new hallucinogenic drug to "take the pain off" is absolute bonkers.
Nomvula's narrative is perhaps the most poignant and raw - the pain and suffering that this little girl goes through at such an early age is horrifying. Despite being the chosen "one", Nomvula's transition is heart-rending and thus, the most compelling POV in the whole book, I felt. Her training with Mr. Tau who sort of, is like the First God among the living creatures, ( the mythology and the world building scenes that Nicky has written to flesh out this part is unbelievably zany and yet so engrossing!) is the mandatory mentor-mentee track that needed to be written in. But despite this "trope", the treatment is special and makes for a very satisfying read.
Stoker's secret ambitions to become a transgender musical genius, in the footsteps of his/her idol Riya is another hilarious track ( Watch out for his assistant called Mbende who is a force of nature and there's his mother who is quite the deceptive one!) that frequently crosses over with Riya's own bonkers fucked-up secret life. Riya has problems galore. She is an addict, maybe too fond of her own drug-dealer (Rife, who happens to be Elkin's cousin!) and has "daddy-issues". All the while maintaining this facade of a mean pop diva with fiercely crazy tantrums. All of this pivots, in that one moment when she meets up with her heart-broken dad, whom she had ditched in her flight to be famous. While her redemption arc is interesting, all of these pale in comparison to the hilarious and terrifying ambitions of the deranged demi-goddess Sydney. She feasts on the fear of the people who see her true form and grows stronger by the day.
And lined up against her are the four inexperienced misfits each with newly discovering their own fledgling wondrous powers, maybe awakened by exposure to this new hallucinogenic drug that they partake.
The secret sauce though, has to be Clever 4-1. Yup - that's the name of the robot that would lead an AI uprising in these trying times and this may just topple even the Gods and their crazy ambitions.
Yeah - it is as crazy as it sounds. And yet Nicky Drayden makes it all work, balancing wildly disparate elements and fitting together those tenuous threads to make one hell of a genre-bending, roller-coaster of a ride. A truly phenomenal debut that knocked my socks off, and despite being "weird", this book is so much fun to read. South Africa never sounded so exotic. Gods, Myths, Pop singers, Rogue Robots all of them mixed up in a crazy tangle that could lead to the extinction of human race. Be prepared for an exhilarating wild ride, like nothing before. What makes humans tick? A nuanced sentient robot trying to get to this answer is the most fun thing I have read in a long time. Definitely one of my favourite mash-up novels of all times.
2017 Books Best of 2017 Fantasy science fiction