April 28, 2020
Mark Lawrence is a writing machine. How else do you explain this writing phenomenon who has gone on to give us a dozen books (That's FOUR completed trilogies, guys!) across fantasy and science fiction - and continues to push the envelope, when it comes to the dazzling brilliance, characteristic of his every single work? Inching higher than ever, with every single novel that has come out. Let me take a moment here to express my gratitude and awe at the sheer dedication of this Thorn Guy to his craft and the manner in which he has continued to entertain us and force us to think, throughout these last twelve books that's been excellent, excellent stuff. 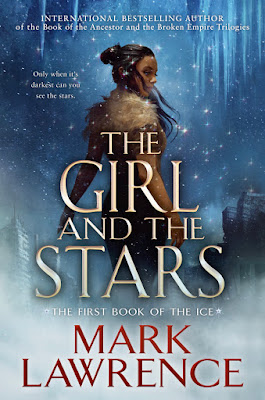 So now - the new book. The Girl and the Stars, the opening book in this series called The Book of the Ice, is set in the same brutal world of Abeth, slowly succumbing to ice. Yeah - the same world. that Nona and her Sisters are trying to save. But the story of the Red Sister and the subsequent sequels were set in this narrow belt between the two rapidly encroaching gulfs of ice, where life still thrives and there is still a bit of green. The Girl and the Stars, however is set much further to the North of this planet, the polar ice caps. Where, for miles and miles, there is just the sea of white and the song of wind and pretty much nothing else.

The Ictha, the northernmost tribe, are known for their hardiness and strength, tempering an iron resolve that believes in the collective strength of their community to weather their lives in this sea of white. Yaz, a young Ictha girl on the cusp of her adulthood and grand dreams about her life and place in this world, is traveling to this congregation where the different tribes are gathering for the ultimate test for proving the adulthood of the youngsters gathered. Surrendering to the will of this priest they all believe to be the 'Regulator' - one who weeds out the deformities of the tribe, by throwing the weakest of the tribes down into a yawning pit under this place called the Black Rock.

The deformities in such a brutal world, could mean weakness and consequently disaster for the entire family and tribe. And so, this practice is accepted, even revered by the tribes of the ice. But their collective ignorance of what or how these deformities are manifest, speaks to the deep seated fear and superstition that studs their culture.

Yaz, on the other hand. harbours her own secret. A deformity that allows her to view and touch these strands of magic flowing all around her in this world. And so, she's prepared to flunk this ultimate test of 'adulthood' where the priest would adjudge her weak and then throw her in. But what happens next leaves her scared and shaking with disbelief. And forces her own hand, as she plunges deep into that pit, under the black rock. To quest for her own self, for answers to questions that she never knew, even existed. About the origins of her whole world, of the blind beliefs of her tribes. Of the past history of the planet Abeth.

Mark Lawrence, a past master at world building, transports us back to this amazingly lived-in, beautiful but dangerous land of slippery ice, moaning winds, dangerous whales, devious demons, giant coal-worms and what not (Lots more of such interesting constructs, that I could write a whole different book on that.) But what he does, brilliantly, while organically building out this amazing planet of Abeth, is also to hang the heavy flesh and bones of the character-study of this young girl called Yaz. She's the star of the show. The naive girl whose world above the ice, made her dream of a domestic life that would probably have been only a little variation of her own mother's, transforms herself into an absolutely fearless leader by the end of this first book. Her character arc is absolutely stunning, a powerful girl who doesn't realise her own strength, till she's challenged and forced to save the life of her loved ones.

The subterranean world of the Broken, that Yaz discovers under the harsh polar ice-cap, deep inside is also fascinating. The other characters like the brave Quell, the idealistic Thurin, the sly Maya or the mysterious stranger Erris from the 'City' all of them add depth and meaning to Yaz's transformation. But ultimately serve as catalyst to her own discovery of self.  And the secrets, oh my God, the secrets that she discovers - it's like Mark has finally opened up that Big Chest of Secrets that he's been hinting at over the course, of perhaps his first 9 odd novels. It's terrific, feeding into the yarn of the Missing, the first order of Men or God-lings who possibly were the architects of a lot of marvels that we encounter hidden deep under the belt of ice.

I absolutely adored the character of the wise and charming Erris. I wouldn't delve deeper into him, for fear of spoilers but trust me, this guy was such a hoot. Yaz remains steely-eyed and determined, her legendary Ictha will-power and her affinity for magic ( She's a marjal, equipped to dip into the streams of magic that float all around us!) making her the ideal leader of the Broken. So Erris is the perfect foil to her. And there's Thurin, a quantal with his own skills for working the ice, a wonder boy who has had the demons purged from inside him. For most parts, Thurin is the driving force that propels Yaz to push herself and believe that she can finish her mission. Mark almost made me believe that it becomes a love-quadrangle by throwing in Quell, into the mix. But this isn't that story. It's turns out to be a compelling narrative about redemption and a self-discovery. I wouldn't call it strictly YA either, despite the age of Yaz.

As the story progresses at a breakneck pace ( the whole story perhaps is set only over a few days time-span but the amazing character arc evolutions makes us feel like, a lifetime has passed. And indeed, there are certain "dream" sequences that possibly spans across centuries, but I am not giving away any spoilers on that here.) Mark touches upon elements of a possible class system - the haves above the ice, again regimented into following their own fears and superstition, while the have-nots deep inside the cradle of the earth, have their own issues, struggles of power, civil wars and the persistent issues of 'demons' [ remember, the demon from Grey Sister within Nona?]

Mark's style of writing remains top-notch. Hitting us time and again, with such beautiful turns of phrases that hints at some heavy truths of life, that you discover as you go along. The pacing is very even and fluid, grabbing us from get-go - in that character voice of Yaz - and then taking us on a heady wild ride, deep into the centre of this world of ice. Twists and turns galore, my only grouch of course, would be the damn cliffhanger. We need book two, like right NOW.

Anyways - in the Girl and the Stars, Mark has basically brought together a lot of mysteries and ideas that he's been hinting at, in his previous novels. It is explosive stuff, an impossible scintillating mix of fantasy, adventure, science, mythology and even horror to some extent. Signature Mark really. But I truly, truly loved the Girl and the Stars for what it does to the genre. Invent something new that expands the boundaries of this genre. Maybe we should stop calling That Thorn Guy and refer to him as That Ice Guy, huh?
2020 books Book Review Epic Fantasy mark lawrence science fiction