The Wolf of Oren-Yaro by KS Villoso

February 27, 2020
The Wolf of Oren-Yaro by KS Villoso is a stunning debut about a conflict-ridden empire built on Asian cultural folklores (mainly Filipino) featuring an absolute badass leading lady known as the Bitch Queen who is ready to die and kill equally, to protect her duty, honour and love. 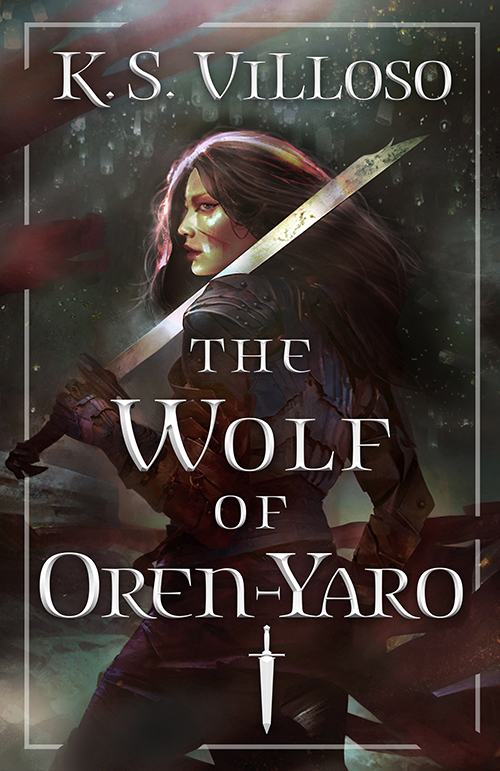 This book is one of the self-published success stories, that got picked up by Orbit and re-released into the larger world ( to the absolute delight of readers like me!) - the paperback version just released last week and I happened to get an ARC for the same, a while back. Had been seeing glowing reviews of this character-driven epic fantasy all over the my feeds and I knew, I had to check this out. Having sat through yesterday night, feverishly turning the pages like mad at two thirty am yesterday night to reach the end, I can vouch for the fact that you haven't read anything like this, in a while among the whole epic fantasy stories or narratives.

Initially and even till the point of three-fourths of the novel, I was actually frustrated by this narrative. Villoso chooses to hold back her hand and we are hit time and again by layers of intrigue, backstabbing, hidden conspiracies and surprise revelations about Queen Talyien's mission. Truth is a nymph we never really track down, till the end of the book and I realise now that my enjoyment of this twisted tour-de-force of a narrative, solely focused on Tali's character transformation and growth actually blindsides us to the larger forces at play within the Empire.

Queen Talyien is on a mission to unite her war-torn kingdom, by holding true to her father's ambition of unifying two bickering tribes - the Wolves of Oren-Yaro and the scholastic but highly ambitious clan of Ikkessaris. She was betrothed from her childhood to Rayyel, the heir to the Ikkessaris and their union would mean, a Dragonlord would yet again rule, from the folds of Oren-Yaro. But the plans get thwarted as Rayyel walks out on their wedding after three years, perhaps in a strategic move right on the eve of their royal ascension to the joint throne. Tali is not deterred and it has been five years now when she's been ruling as the sole Dragonlord.  Obviously, things have not been a cakewalk. The war-lords are still baying for blood. And no one wants to submit to a queen.

But the complications deepen - as Tali has now received a summons from her estranged-husband Rayyel demanding that they meet up in a neighbouring city to discuss the future. Tali cannot resist and with some very pertinent questions on her mind about their relationship, their son and their kingdom and promises in tatters, she heads right into a nest of vipers. What happens next is a rollercoaster ride as Talyien flees for her life, hunted at every turn by shadowy assassins, magical beings, fiery dragons, demon-crazed suitors for her hand and lots more. She doesn't trust anyone and her misgivings about human beings in general is only validated by the rough treatment meted out to her, by greedy merchants or power-crazy aristocrats.

The world of Jin-Sayieng and even the larger Kingdom is an incredibly lived in, fleshed out world borrowing themes for various asian cultures and predominantly from Villoso's own Filipino folklores. We get to see the nuances in the many cities that the author drags her lead character through - the street food ( yum!!), the rich dresses, the social hierarchies and the historical backstories to the various clans. All them organically woven into the overall story-telling process but nicely detailed out so to stick in your memory. And yet, with this just being an opening salvo in the Annals of the Bitch Queen and generous hints about the magical forces at large (agan!) or the mutant creatures and the menace of the fiery dragons in the west, we only know it is going to be bigger and better.

Tali is an absolutely bewitching character - with her fiercely independent nature, strong ideals and a mental toughness borne out of a life of hardship. And yet, with the first person narrative, it is easy to get inside the cracks of her tough exterior, moments of extreme vulnerability that puts her in absolute contradiction to her image, that of a 'bitch queen.' Indeed, there are many shocking moments when Talyien the Queen needs to tighten up her girdle and dole out punishments and she does this without blinking her eye. Death to the traitors. Punishing the disobedient soldiers. Or steeling herself against her own husband, if he doesn't hold up her version of the ideals. But the story is Tali's own, her struggles, her redemption, her mistakes and her lessons learnt in blood. Supporting her are quite a few secondary characters - like Khine, an ordinary citizen who dropped out of his medical studies and becomes quite the most enjoyable character whenever he comes on. Or Agos, the soldier and ex-captain of Tali's bodyboard who grew up with her from childhood days. There is also Prince Yuebek, the fifth son of the Emperor who makes his appearance quite late in the book but definitely leaves a mark. But perhaps the most intriguing of all, is Rayyel - Tali's husband, the leader of the opposing Ikkessari clan, a reclusive scholar with his own vested interests and intentions in this whole power play. Queen Talyien's relationship with him is complicated and is perhaps, the most interesting puzzle to be teased out of the entire first book. And Villoso gives us enough hints to know, that they aren't done, by quite a far margin.

The narrative unfolds like a slow-burn, a jigsaw puzzle with many pieces missing, slowly falling into piece even as Talyien along with her new found allies flees from one danger to the other, all the while unspooling a chain of events from her past. The fateful night when Rayyel walked away from the crowning ceremony, what led up to that moment. It's frustrating and exciting in equal measure and my only advise would be to stick with it - because once the reveals start stacking up, the pace picks up and it's a whirlwind of action and suspense, balanced on a knife's edge. If you are expecting a courtroom intrigue, then boy, are you in for a surprise. Because Villoso drags you out in the dead of the night from inside the warm palace, out into the cold countryside with the pouring rain and dangerous bandit-ridden tropical jungles. It's a wild heady ride, from there. One that dips down and threatens to throw you off the back but trust me, just hang in there.

The Wolf of Oren-Yaro is a great start to an Asian-inspired character-driven epic fantasy tale that subverts your expectation time and again, all in a good way. Cannot wait for the next instalment of this hard-hitting adventure that is a great shiny example of an intimately personal narrative weaved right in the middle of much larger conspiracy that would set kingdoms clashing and empires crumbling down. Kudos!
2020 books Asian Book Review Epic Fantasy KS Villoso Orbit