February 09, 2020
The Daughter That Bleeds, a short story by Shweta Taneja, opens up in post-apocalyptic India, where fertile women are rare and sold as commodities by their family. Told with a sense of humour, the story reflects upon notions of gender, class, fertility and parental affection. The short story has was awarded the Editor's Choice Best Asian Speculative Fiction Award in 2018. The story has also been translated to Romanian and Dutch.

Shweta Taneja, author:
"It's a huge honour! As our world tumbles towards chaos, speculative fiction has become a space where we imagine the alternative, rethink our society and culture and who we want to become," says Shweta Taneja. "I'm delighted that this feminist humourous story that I wrote to explore my experiences and fears as a modern, independent woman, has received recognition and resonance not only in Asia but also in Europe. The award nomination shows that Indian speculative fiction has come of age and Indian speculative authors are being recognised by international literary juries." 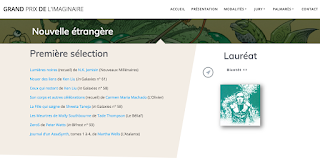 The Grand Prix de l'Imaginaire Awards is the oldest and most prestigious literary award in France for science fiction and fantasy. It is awarded by a jury every years to both works originally in French and works translated into French.
The list of shortlisted authors for this year (in French): https://gpi.noosfere.org/gpi-2020/

I personally am a big fan of Shweta's writing and believe her to be one of those acclaimed authors, who is working hard to put Indian Speculative Fiction out there on the world map. This is absolutely stellar! 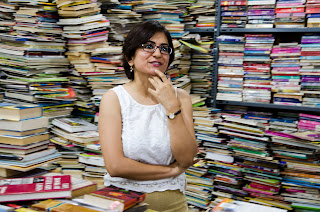 Shweta Taneja is a bestselling speculative fiction author from India, most known for her series, Anantya Tantrist Mysteries. She’s a British Council Charles Wallace Fellow and is passionate towards Asian, feminist, humour and diverse science fiction and fantasy. She has been invited to give talks on Asian SFF at Cartoon Museum London, WorldCon and Eurocon, among others. Her short story, The Daughter That Bleeds was awarded the Editor's Choice Award in The Best Asian Speculative Fiction 2018 and shortlisted for the prestigious French Grand Prix de l'Imaginaire Awards 2020. Her graphic novel Krishna Defender of Dharma is part of the Must-Read list in government schools across India, while The Skull Rosary a noir black and white comic was shortlisted for Best Writer award at ComicCon. You can find her lurking and cackling online through her handle @shwetawrites