February 10, 2020
Hazel Wood (and its sequel, Night Country) by Melissa Albert have been described as a tantalizingly dark, modern day spin on our favorite fairy-tales, a nod to Alice in Wonderland and perhaps a lot more thrown in. I went into the book without much expectations frankly but Melissa's beautiful prose quickly sucked me  deep into the vortex of the stormy lives of Alice and her mother, Ella - who have always been on the move for reasons unknown, except for a foreboding sense of misgiving that something or someone is following them. Bad luck certainly seems to top that list. 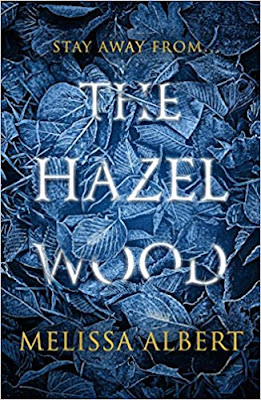 For Alice is the granddaughter to Althea Proserpine, a small time writer whose single book, called the Tales from the Hinterland, became kind of a cult success among a small clutch of hardcore dedicated fan base of readers. Now Althea has secluded herself in this obscure ancestral property called the Hazel Wood, the whereabouts of which remain hazy and unknown. Alice has never met her grandmother and questions to Ella about her or even Ella's childhood is completely stonewalled. Alice thus, has had a tumultuous childhood, moving from one place to another, never a permanent boarding or even allowed to have friends in her life. And thus, Alice finds refuge in books and fairy tales. But even she has never managed to read the Tales from the Hinterland.

Things come to head - when Alice realizes one evening that her mother Ella, the one constant in her ever-rotating complicated life-trajectory, has been kidnapped. And ridiculous as it may sound, elements from the Hinterland take responsibility for the same. Sending her cryptic clues in the form of torn pages or dropped artifacts like feather, a comb etc. Alice realizes that her grandmother's (presumed dead in her estate) influence possibly extends beyond her grave and to get her mother back, she would need to crack down on this mystery of the Hazel Wood, inexplicably entwined with that book, the Tales from the Hinterland.

Lucky for her, she finds this bi-racial fan-boy rich-kid nerd Ellery Finch who always has wanted to "go on an adventure" all his life and this seemed like the perfect excuse for him. Melissa takes just moments to expertly paint the picture of this lonely rich boy. yearning for attention and love, desperate enough to go on this impossible quest to satisfy his geek-curiosities about dark fairy tales. A charmer, Ellery quicklyy takes charge of this 'para-normal' investigation, securing resources and tracking down leads to help them in this search for the elusive Hazel Wood.

From here on, the narrative woven around Alice from the moment she stumbles onto a big secret about her grandmother's tales, is elevated from being just a suspenseful thriller into a highly immersive horror novel. Melissa weaves in enough human elements galore in her whole narrative to make us relate to the adventures of Alice and her friends. Alice herself, is an insecure sullen teenager with anger issues to boot. She has a hot core that keeps igniting up at the drop of a hat and having had a childhood-mostly-on-the-run, also has trust issues galore. So her growing friendship with Ellery is one of the warmest transformations I have read and liked among the recent books.

But what makes Hazel Wood stand out is the excellent story (pun intended!)- lyrical and haunting, creepy and full of horrific suspense, what starts out as possibly a YA suspense thriller breaks out into a full blown dark fairy-tale horror. Casual brutal violence, shocking deaths and the karma of cyclical evil that comes back to haunt you time and again. There is an unflinching look into the consequences of your thoughtless actions, of the dangers lurking behind that those innocuous fairy tale stereotypes (like  that harmless ratty old grandmother who can offer you a wish but careful what you wish for!).

Melissa is a wizard of sorts, with her writing witchery splayed out and paced beautifully as the story comes alive in her poetical language. While her characters are all well fleshed out, flawed and deep, I frankly just couldn't bring myself to like the spunky, fiercely independent Alice. Ellery, the supposed 'knight in shining armor to the damsel-not-in-distress of Alice, was a welcome addition.

But the story has no doubt, one of the most propulsive concept going for it. For this is not 'average' wonderland, with friendly rabbits and tea-time breaks. This is a bleak landscape where your actions have horrific consequences. Imagination and stories are powerful concepts and can wreck havoc with the natural order of things. This isn't your regular escapist fantasy but it's a thought-provoking lyrical treatise on the darker aspects of our favorite fairy-tales. While the first book Hazel Wood reads like a standalone, there are countless worlds opened up. So I am definitely picking up the next book, Night Country. Because, hey, the portals - they are a-open. And a-waiting to be leapt through!