February 01, 2020
This book, Gideon the Ninth (part of a proposed trilogy called the Locked Tombs) from TOR about necromancers crossed with weird lesbians and stuffed to the gills with tons of swashbuckling sword-fights was a readers’ favorite world over. In fact looking at the glowing references and the reviews, this one’s a writers’ favorite too. As well as a blogger universe’s darling. It took me a good long year to land my hands on this one. Perhaps in good time , because Harrow the Ninth is all set for a bumper release in the first half of this year. 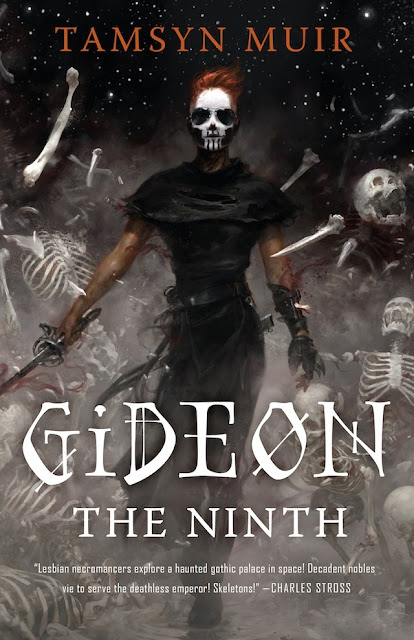 So Gideon the Ninth, I can safely claim, is nothing like anything I have ever read before. Is that a good thing? Where your writing cares nought for a rat’s ass about established guard rails and thwarts preconceived notions about a mixed-genre narrative, skewering them repeatedly and by a good long measure.

Take the snark levels of Shrek the Ogre and dial it up to a level thousand and one. Mix parts of Harry Potter, Agatha Christie locked-room mysteries and the awkward gawky teen romances of Korean soap operas. Set them all on a remote dusty corner of an unexplored space in the forgotten universe in a time possibly far far into the future. Now arm them with messed up, inexplicable magic (‘thanurgy?”) based off of dead bodies/necromancy.  This is the genius set-up for Gideon the Ninth. You got me, hook line and sinker, I thought as I cracked open the book and read the first few lines.

Wicked humor flew fast and thick, contemporary slangs intertwined with Lovecraftian goth mode as Tamsyn sets up both of our lead characters in the story: There’s Gideon Nav – a simple soldier jock whose motivation in life are things like sword fighting, one-hand push ups and a clutch of dirty magazines. Oh, and she has also tried to escape from her current home on the Ninth House, only like about six hundred or more times. Unsuccessfully. She has been wanting to escape the dreary existence aboard the Ninth house, an almost claustrophobic place walled in with skeletons for company. Because growing up with the only other ‘child’ on the Ninth – the reverend daughter Harrowhawk Nonagesimus, is not a fun thing. Not when you have to fight for your very life at every blind turn of a tunnel or watch out for armies of skeletons out to really splatter your brains like a discarded sandwich. Harrowhawk is the heir to this House and is one of the most accomplished necromancers who considers her holy duty to bring glory to this fading forgotten House, in the name of the Necromancer Prime, the Undying Emperor. Now these two surly teenagers hate each to an inch of their lives. Even coming close to inflicting grievous injuries in the name of games and one-upmanship over each other.

This much is established in the first few chapters and I was really howling with glee - at the ease of the prose that slicked off the pages, the blade-sharp sarcasm and the unending hurt in one as young as Gideon and at the sophisticated, yet gleefully malicious intents that were radiating off, from the Reverend daughter. The set-up was a hoot and the side-characters including Gideon's sword master and Harrow's bodyguard etc were ample fodder for Gideon's snark supreme.

Their intense relationship gets a brief reprieve when the House gets an invite from the Undying Emperor’s First House about this competition between the necromancers of all Eight Houses and their ‘cavalier primary’ (something like an indentured swordsman, bodyguard!) – the winner gets to ascend to the post of a ‘Lichtor’ – an immortal necromancer in service of the Undying Emperor Himself. Naturally, the highly ambitious and ferociously driven Harrow decides to give it all she has. And poor Gideon has to tag along, lured by the promises of eternal freedom, that she has been craving for, for all the last eighteen years spent in the painful shadow of the reverend daughter.

Once at the Canaan House, they get introduced by turns, to the various other necromancers and their cavaliers – all here to try their luck at winning this competition. However, apart from a really ancient-looking frail priest who calls himself Teacher and their skeletal construct servants, Canaan House is a world shut unto itself, with myriad underground passages and locked doors.  A dying world, a huge castle going to ruin, the crumbling walls awash with lichen, moss and dying plants. Even the rules of the so-called competition are unclear. Each of them are handed an iron ring and the puzzle, the nature of which isn't really very clear, is existent within the walls of this creepy house.

The necromancers set off gleefully to solve this bonkers mystery - till they realize that something or someone is actually hunting them within these walls. Bone-spattering gooey-i-ness, blood-soaked madness, massive skeletons on an aimless rampage and tons of scintillating swordfights and duels ensue. Absolute chaos descends unto the dark walls of the First House; lives are at stake in this mind-fuckery of a race for immortality. And Harrowhawk and Gideon start to realize that they probably have to keep their temporary differences aside, not just to solve this locked-room mystery and get to title of the immortal Lichtor, but to just survive this horror.

I cannot honestly figure out how this absolute mish-mash of a science fiction, fantasy and horror novel makes it work. Tamsyn Muir sets up the unique voice of Gideon straight from get-go. Brash and egoistic with a badass attitude and a scathing sense of sarcasm. Gideon brings color to the pages and how. Her witty repartees, mental jibes and spot-on timing for comedy is a blast of fresh air in this otherwise dark, dark story about  skeletons going crazy inside a crammed up corner of a crumbling mansion in some far off part of space. The novel is essentially a fantasy reader's dream. with the whole magic ( thanurgy - necromancy!) and the incessant sword fights. And a mind boggling backstory to the entire empire itself. But hey, then it's set up in some forgotten corner of the space, featuring nine different planets and space shuttles.  And that is squarely science fiction territory. And then throw in murderous skeletal constructs, blood thirsty beings in dark spooky corners of that castle. A liberal dash of horror that continues to escalate into a brilliant explosive ending.

The whole narrative pivots around the relationship between Gideon and her 'master' Harrow. Their tumultuous relationship goes through such unbelievable tests. The two are baying for each others' blood but in a series of baffling developments inside the Manor House when bodies start turning up randomly, their relationship takes a complete one-eighty turn. While Harrow was always the ultra-focused, determined to live through hell and high-water till she achieves her goals kinda personality, there's the secrets that she's been harboring which completely blew me over. There's also the hush-hush about Gideon's past - an orphan brought up in the Ninth House. We knew, this was going to explode in our faces.

There are the other house representatives - all puppets in this complex death drama, each of them twisted and brilliant in their own rights. But the ones that took my heart and wrung it dry before tacking it up for target-practice were Dulcinea Septimus, the damsel in distress, also the necromancer from Seventh who's slowly wasting away to death. And then there's Palamedus Sextus - the know-it-all Necromancer, a super stiff competitor to Harrow's tall ambitions along with his dedicated cavalier, Camilla who's a devil incarnate with her swordsmanship and knives.

I have to say, I loved this book in parts. After setting up the characters brilliantly right up front, we are taken on an endless parade of new names and personalities [ there's a helpful character chart right at the beginning of the book of course!] in a series of uneventful shenanigans within the Canaan house. And then the first body drops. Suddenly everyone is a suspect inside that Manor House. And the whole set of affairs go to hell, a rapidly devolving catastrophe. My favorite bits, apart from the fantastic sword-duels, were the ones that involved Gideon negotiating with Harrow about everything. Well, Gideon talking to herself in that vitriolic diatribe about the unfairness of life, comes a close second.

No doubts, this book lives up and goes much beyond that hype. In her fancy-ass goth-paint and those ray ban sunglasses balanced on the edge of her nose and a rapier clutched firmly in her hands, Gideon the Ninth is going to fracking blow your mind off. Would definitely have been my pick of 2019, had I had the good sense to read this sooner.

Anyhoos - there is Harrow the Ninth. And then there is dead space. Coming real soon to get your bones tangled up in a hot pickled soup. And I cannot wait to get there! All in for the Ninth.