January 07, 2020
Trust Malayalam movies to skewer movie tropes on Robots saving the world! After having subjected us to horrors like Robot 2.0, I think Android Kunjappan Version 5.25 (AKV5.25) comes as a refreshingly original take on the robot-myths in Indian movies. Treating AI/robotics as it should be, rather than muck around in murky waters of ethics and robo-genocides, the movie keeps it simple and straightforward. One of the best movies I have seen from 2019. Period. 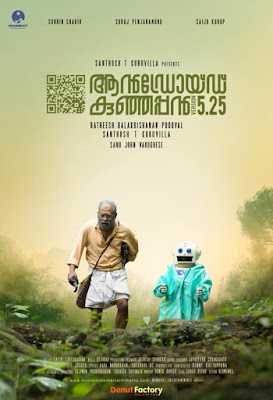 An odd-ball comedy of errors, AKV5.25 is set in a small village in Payannur, North Kerala. It follows the life of grouchy old man Bhaskaran Poduval ( Siraj Venjaramoodu knocks it out of the park with his searing, heart-rending performance!) and his electronics engineer son, Subramanhiyan who's forced to give up good job prospects in cities like Bangalore and Kochi, as he is duty-bound to take care of his old father. Both their lives are turned upside down, when Subramanhiyan decides to risk it out in a Japanese robotics company in Russia, far away from the clutches of the grumpy control-freak of a father and brings back a robot, to take care of his father. The android, version 5.25 is christened Kunjappan by the gossipy neighbours and the rest of the narrative follows what happens when the adorably cute as a button robot endears itself into the lives of the villagers.

Snappy writing, sharp camerawork that blends in nostalgia with true blue images from a sleepy Kannur hamlet backed up by some amazing performances from all the actors in the story - all of this makes AKV5.25 a very refreshingly original movie. Siraj recently got awarded the national award for best actor performance across movies this year and this one is going to be a cornerstone in his amazing career that has taken a 180-degree turn for the better. From being the annoying comic side-kick to playing some emotionally hefty character artist roles, this actor has come a long way in his career. Proving time and again, that he is a supremely talented actor, to be underestimated at your own peril. He topped off his crowning 2019 with Driving License, playing another interesting character-role that he has essayed to perfection. But of all movies that I have seen, his role as the loving but strict father Bhaskara Poduval who transforms himself from being the rigid, salty old grouch to a loving father who rediscovers hope and happiness in the guileless naïveté of a robot, has been my favourite. He excels in this role - being startlingly convincing, with the body language of a man on the wrong side of sixty or his perfection of the Kannur dialect. Soubin Shahir who plays the conflicted son, who has had to leave his ailing old man to work in foreign shores, is also an acting powerhouse. He excels in such types of roles and is also now, a mainstay of Malayalam movies. Full points to him as well. 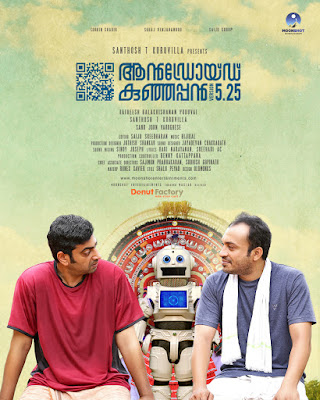 But I think, the best part of the story itself is the side-performances by tons of talented junior artistes or newcomers. Bringing that whole close-knit village atmosphere alive where everybody knows each other intimately. There is the ever-dependable Saiju Kurup who plays Prasannan, cousin to Subramanhiyan, restaurant owner and also responsible for keeping an eye on the old man. The others who pitch in, are an ensemble of motley crew that you would possibly come across gathered in any small village in Kerala. Sitting around the temple lawns, gossiping about the futility of life, their curiosity piqued by the latest out of town tenant who's come into live on rent and whose lives revolve around their day to day interactions in the local eatery, bitching about the misguided rituals of a death-ceremony etc.

Apart from that awkward romance between Soubin's character and the newcomer Kendy Zirdo, playing the role of a half-japanese, half-malayali colleague called Hitomi and perhaps, a slightly long-winded second half aimed at bolstering up that father-son relationship between Bhaskaran and Kunjappan the robot or the Facebook romance between Bhaskaran and his old flame, this movie is a great watch, never faltering or boring. There is ample humour - be it situational because of some literal translations and misunderstanding by the machine or the gossipy neighbours and their tactless conversations that land them in hot soup, time after time. There is a message hidden beneath all that, about loneliness of the old age and the need to accept and integrate our ailing parents into our lives. Not preachy but nevertheless very strongly put across. The ending conflicted climax was bit of a dampener for me personally, but all things said and done, director Ratheesh Balakrishnan brings in novelty in the form of comedy spread-eagled on a science-fictional base. An experimental effort clearly an attempt to push the boundaries of this movie industry.

Highly recommended. Watch it for the searing performances and of course, for the robot reciting the Bhagavat Gita to bridge the chasms caused by casteism and religion.

Billy Hall said…
Thank you for such info. If you are movieholic and want to try movies with unique plot on netflix. Here is list of some of Best Stoner Movies on Netflix for you. If you looking for stoner movies and don't know where to find, we reduce your efforts for searching it. Hope you like it.
September 25, 2020 at 1:25 PM