January 03, 2020
Cry Pilot came out in 2019, a debut military sci-fi novel set in a futuristic bleak version of Earth filled with threats like sentient (Ascended) AI, bio-engineering and mutant forms that arise out of a terraforming process, intended to bring back the older greener form of Mother Earth. 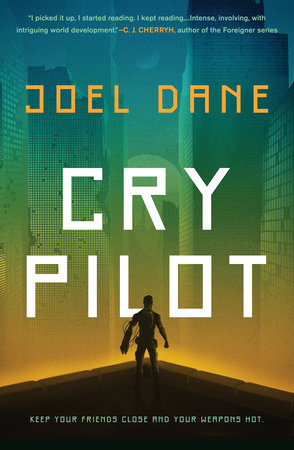 I admit, I haven't read much of military sci-fi. In a long long time time now. So Cry Pilot was a welcome leap back into this genre for me. But I admit, it took it's own sweet time working its charm on me as a reader. For most of the first quarter of the book, I was aloof and disenchanted by Maseo Kaytu, the "cry pilot"  who headlines the act and is our single first-person POV to the narrative. I was a bit disappointed, thinking that if I don't bond well enough with our main 'hero', rest of the narrative is going to fall by the wayside. But thankfully, with an adroit handle on the pacing, I was soon cruising into the exciting and gruelling training camps that Maseo had managed to sneak himself into,  for combat training as a lifelong soldier dedicated to the cause of protecting Earth.

More specifically. the corporate interests of the capitalist organisations running the show on Earth. Because hey, Earth in the future is indeed a botched up hot mess. After multiples of patriotic nations went to war over resources and drawing up boundary-lines, it was up to the big "corporations" who saw beyond the races and the nationalism, to protect the lives on earth and also initiate "recycling" of the older greener versions to mop up this mess.

There is a tremendous amount of world building to really flesh out the future that comes alive in Joel's prose. Tiny corporate enclaves where humans live at different levels, the lowest ghettos called as FreeHolds housing most of the 'have-nots' while the hotshots live in comfort at the top levels. Quite a few interesting future-tech also listed out in the book tickles your imagination. It's fascinating and also cumbersome in equal measures as Joel frequently side-tracks down a rabbit hole to gush euphoric on the tech-details of the latest weaponry and gadgets that define the "military" nature of the narrative. But truly, Joel's extensive vision for our future Earth is nicely mapped out, coming alive in fits and bursts as the narrative races through the tough training sessions that Kaytu and his team is subjected to.

There are bon-homie and bro-bonding  scenes galore here as Kaytu tries to bond with his soldier team. Kaytu initially comes across as a bit mysterious, a man consumed by his guilt and one who would never "sacrifice" his own team, for any larger goal or objective. Making him 'selfish' and thus, a 'patriot' at heart, unfit to be a soldier carrying out orders. Now Joel neatly defines this further on, delving deeper into Kaytu's chequered background to understand the reasons behind this behaviour and thus further endearing this character to the reader. Kaytu's character in fact, is set up like an ogre. Subsequent flashbacks reveal and unwrap a new layer and this was rewarding ( at least it was, for me!)

Kaytu's team mates are also well written. But his relationship with two of them really stand out. First, his friendship with Tingting, a young girl who is the only one among the three survivors of an early cry-pilot outing. (Now Cry Pilot, the title of the book and a confusing centralised theme of the whole narrative is a volunteer pilot who steps into these AI-Mecha flying contraptions called CAV, a uniquely designed flying technovation built to damage and take out the sentient machine threats to this world. The survival rates are dismal and CAVs usually end up as junked up suicide tin-cans for these pilots.) Now Ting is a tech-whiz and can hack through any forms of communication protocol and networks, becoming the eyes and ears of this team in this world running on digi-comms. But she also harbours a dangerous secret, one that could see both Kaytu and her kicked out of the military training. Then there is Rana, a high-born who enlists for the same training as Kaytu, on who is born for the stars and is clear officer-rank material. She remains that enigma for the 'gutter-roach' that Kaytu is. But the sparks between them is unmistakable! The rest of them are all special and uniquely characterised with their own idiosyncrasies developed over the course of the whole narrative that focuses on their extensive training. The one thing that unites them, is their undying zeal to complete the mission that they have been chosen for.

This mission: combat and eliminate a new threat, a mutated mecha-AI-bio combatant foe that has risen from backyards of the whole "Terraforming" exercise, whose ability to inflict damage to human lives and infrastructure is massive and terrifying. Known as 'lamprey', nobody in the military have been able to effectively neutralise these threats. Can Kaytu's team rise up, will their training be enough for them to combat this foe, forms the rest of the narrative.

Joel writes up a storm, with the whole pulse-pounding action sequences and scintillating battle-scenes lifted straight out of a futuristic video-action-game thriller. I enjoyed these quite a lot and having warmed up to the character of Kaytu and his best friends caught up in the middle of this battle, with the odds stacked up against them, the book was quite an enjoyable ride.

Clunky jargons and info-dumps aside, Cry Pilot is an excellent military science fiction book, designed to thrill your senses. With inventive world building and well crafted characters, this series is an intriguing and thought-provoking look at what the future can hold. Liberally interspersed with adrenaline-pumping military warfare, it's an excellent start to a futuristic sci-fi series. Highly recommended.