Rise of the Skywalker (Star Wars ) - (Not a) Movie Review

December 21, 2019
We knew this was coming.
42 years and 9 movies later, the genius of George Lucas is finally drawing curtains and frankly, I cannot keep calm. Rise of the Skywalker marks the end of the third trilogy of star-wars saga and the full stop on the new story-line as we know it. It is the sort of cultural identity that has been seared into the minds of us fans, deep and long. Regardless of whether you started binge-watching the series on your mobile phone in the last one week ( like my teenage nephew!) or been brought up on the staples of May the Force be with you, right from '77 or like me, got struck by the bug in my college days in the late 90's [The whole concept of a Jedi with light sabre who fights for the Light was mind blowing stuff for me, young adult! I was mesmerised by the start of this whole original series, the first of the prequels that had me enthralled and completely engrossed by the terrible transformation of Anakin Skywalker into Darth Vader !] this has been an emotional journey, a landmark and while we knew JJ Abrams would never ever be able to beat our stratospheric expectations of this franchise, I think he does a commendable job of fan service . 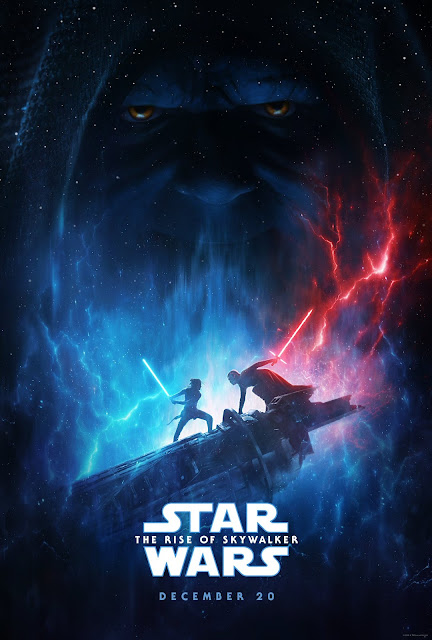 Especially after the landmine of question-marks that dotted the scene right after the Last Jedi, we knew it was going to take something special right out of the gate, from the man who has given us cult classics, in SFF. But of course, barring his talent and vision, there are few who can handle the expectations of this big mantle. Add to that, the extraordinary charm of young baba Yoda on Disney plus [The Mandolorian!] the weight was crushing.

But we are immediately whisked off on a galaxy-wide quest that keeps getting murkier and complicated by the minute that pretty much requires the combined wit and charm of our young heroes. Rey, Finn and Poe are top class, right in their elements exchanging banter and quips by the minute. Rey is as intense as ever, focused on her takeaways from the last movie determined to come good on her Jedi masters' hopes. Chewie drops in on the party aboard the Millennium Falcon and we have quite the adventure as the bunch hops from one planet to the other, grasping at wispy tendrils of clues that might help them save the galaxy. Because the giant shadow of Emperor Palantine looms large as ever [ not a secret I guess because that evil laughter, fuck! is a dead giveaway]

And then there is the burning curiosity about Kylo Ren and Rey. What is the deal with the conflicted Kylo Ren/Ben Solo? And heck, does Rey really go rogue in this one, wielding that double - sided Sith light sabre? Understandably, Kylo is pissed that Rey has chosen to rebuff his advances and still side with the resistance. Adam Driver as the personification of conflicted, hurting Ben Solo/Kylo Ren with divided loyalties is smouldering in his screen presence. Frankly, from that first movie in this trilogy where he was just a sullen boy given to snarls, this character has come a long way. And Adam Driver totally nails it. His haunted expression elevates the movie far above.

There are all sorts of questions that are laid to rest in absolutely grand fashion in this epic conclusion. JJ Abrams plays to a script that is intended to possibly please. Light sabre duels. Inane quests that lead into a galaxy-destroying conspiracy. Jokes and nonstop banter. Cute aliens. We check all of this. But we still come out smoking, tops. Because while in between answering the mystery of Rey's parent lineage and saving the goddamn galaxy again, we are mighty entertained. 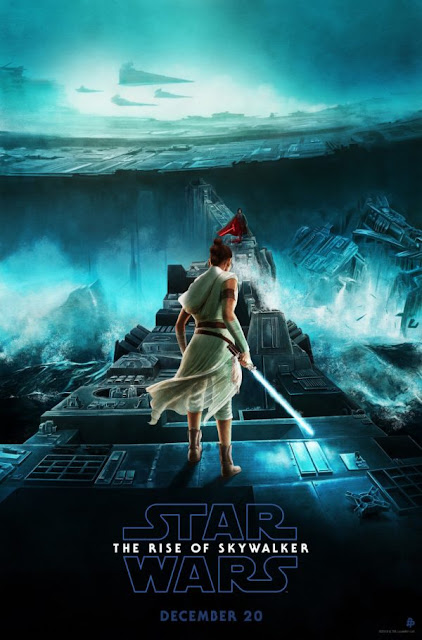 John Boyega as Finn and Oscar Isaac as the dashing reckless pilot who have become the face of the resistance [ not counting Carrie Fischer revived digitally as General Leia, who will forever be the beating heart of the rebellion!] have precious little to do. Because this movie is mostly about the burning needs of young Jedis to prove themselves again and again in a cruel world. Daisy Ridley is excellent, intense and driven to prove herself. And in those scenes that Rey and Kylo get together, it is absolute magic. If the movie deserves to go down as essential film history, then these two are at the core of it. Adam Driver is one of my hot favourite actors now, post this.

There are tons of characters who come back from the dead in this one, that makes you question the cycle of life-and-death and the Force but heck, we loved all the come-backs. There have also been taunts galore about this movie being yet another fan-service and not "daring" to go beyond and push the boundaries. Well, all that aside - this is ultimately a star-wars movie. And for a movie that firmly belongs within this franchise, tasked also with bringing closure to 9 friggin' movies, I think they have tied together enough loose-ends and questions. And as far as entertainment fodder goes, this was a fuckin' landmine. The ebb-and-flow of the loose narrative notwithstanding, I firmly stand behind this one. It's beyond amazing, an emotional rollercoaster of a journey coming to a fitting finale.

And you know what I want to see next? [ Apart from the Mandalorian, of course!] a big screen prequel story of Qui-Gon Jinn done right.
2019 Movies movie review Star Wars