November 20, 2019
Alan Moore's greatest project, Watchmen - possibly one of the best graphic novels/ comics ever written still continues to be ultra-relevant and topical as we are living in the middle of the one of the turbulent politically unstable times ever. I loved the graphic novel and the movie, I thought wasn't too shabby either. But I wasn't a fan-boy. No sir, not until Damon Lindelof ( creator of the one of the most successful longest running telly-series Lost and the critically acclaimed but criminally underrated Leftovers) brought to HBO, this amazing companion sequel to the main movie/comic.

Which in my humble opinion, is undoubtedly the greatest show running on TV today. 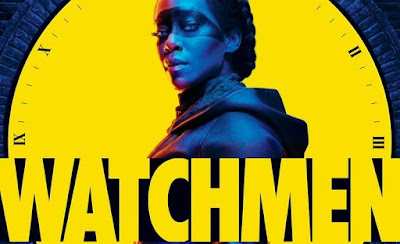 It is set in an alternate America, more specifically, a small town in Oklahoma called Tulsa. Which is a microcosm of modern America filled with masked vigilantes ( pitted against masked policemen, empowered by the ludicrous sounding DOPA - Defence of Police Act, that lets the police force use  violence to bring their own version of justice against these vigilantes!) - an America where  Robert Redford is still president. Skies open at unexpected intervals to rain down squids ( one of the earliest connects to the novel/movie!) Ramifications of the events set in place by Ozymandias to "save" the world have now shaped the fragile society that is shown here in Tulsa, representative of America in general.

In a way, the very first episode that begins with an actual historical event set in the very town of Tulsa sets the grim-fantastic tone for the show. We are shown the stupefying horror that transpired in the small town of Tulsa where the whites took to a mass racial killing of all the black members and their families, an event that shook the whole of America in 1921.  The makers of this show cleverly weave that into the narrative - a re-enactment of those killings, the White Night, where vigilantes wearing Roscharch masks kill policemen and their entire families in their homes - is one of the most crucial axles on which our story turns. This racial hatred episode that has led to rivulets of fissures cracking open humanity has only widened through the ages. One of the survivors of Tulsa Massacre is Angela Abar's grandfather, Will Reeves. And he comes back to Tulsa - a mysterious old man wheelchair ridden, with grim tidings. First signs of the times to come is the death of the police chief Judd Crawford, hanged on a tree. The crackdown against the vigilantes were already in swing but this sets into motion, a frenzied hate-fueled anti-vigilante revolution by the mask-toting policemen. They are afraid now and fear lends them power. Sister Night - the masked Angela Abar who is a timid baker and a compassionate adoptive mother by day, is terrifying in this avatar. As she beats the shit out of the suspected vigilantes to get to the truth of the murder of her beloved chief.

We are five episodes down as of yesterday and the central story is still getting revealed episode by episode. We haven't hit the pedals yet - it is still a simmering menacing slow-burn with different elements of a grand conspiracy being revealed turn by bloody turn. But for all the slow-burn, each episode has been absolutely riveting. We know Angela Abar's character is central to the explosive turn of events that is just around the corner. But my favourite till now has been Laurie Blake - Yup Ex-girlfriend of Dr. Manhattan, the Silk Spectre. Now an FBI agent who's out to get the vigilantes and is now assigned to crack the case of the Crawford murder. She's whip-smart, ruthless with both her tongue and her gun. Played to perfection by Jean Smart, her character is the bridge between the original Watchmen and how they fit into the universe being developed as the companion sequel here. Mind-boggling stuff really, as we get clues one after the other thrown at us (literally raining down from outer space!)

In terms of performances, Regina King brings all of her nuanced vulnerability to the role of Angela Abar. She keeps her emotions bottled up but her rage gets the better of her - venting it out in glass-pod interrogation rooms on suspected members of the Seventh Kavalry, a white supremacist group. She's terrific in her portrayal of contradictory impulses and a brilliant choice as one of the central protagonist on which to hang the fragile threads of a fractured storyline. There's of course the discombobulating side-episodes where we see an old man, played ah so brilliantly by Jeremy Irons, toy with different experiments, helped by his man-servant and maid-servant, android clones all of them. The mystery air is cleared by episode three of course, but for those who haven't seen it yet, I will let their minds be blown in due time.

Each episode expands the world bit by bit, giving us different version of the world altering events. By Episode Five - Wade aka Looking Glass becomes another central character giving us the wider lens into the events set in place by Ozymandias in 1985 that had destroyed three million people in and around NYC that perhaps saved the world from a nuclear Armageddon.

Damon Lindelof is obsessed with alternate dimensions and the thin veneer of our cracked up reality. That the human race is fragile and they are digging their own graves, is one of the strongest messages that he's been projecting. Not so different from Alan Moore's posits from the original seminal piece of work. But for a creator of magnificent talents, who has already given us two of the greatest shows on telly, Watchmen could just be his magnum opus. Brimming with propulsive original ideas, a simmering slowborn that is a mix of supernatural intrigue and mind-boggling philosophies blended in as intense drama. This is the antithesis to the avengers' version of superheroes. The world needs saving, sure. But the caped crusaders might not be enough. We normal everyday humans, have to step in.