November 12, 2019
Asuran literally means the demon. A movie adapted from a popular Tamil novel called Vekkai by Poomani, the movie traces the past and present transformation of Sivasami, the character played by Dhanush (the actor and not the star!) as he cyclically transforms from the demon to a human and then back to being the demon - all to protect his family. It's an intense and gritty character drama about two warring families, treading through the perils of casteism and the gulf between the haves and the downtrodden have-nots.

Sivasami is a poor farmer, whose 3 acres of land is being coveted by the rich landlord Vadakooran, who intends to build a cement factory on this land. But this feud is ignited further when Murugan, Sivasami's eldest son is actually kidnapped and killed by Vadakooran's goons in a defiant act of petty vengeance taken too far. Sivasami is a drunkard, a mild-mannered quiet old man who only wants to live in peace and doesn't want to exacerbate matters even further. Despite his wife's and son's contempt, the man lives on, drowning his fears and sorrow in drunken meaninglessness. Till one year passes and then his younger son, Chidambaram takes matters into his own hands and hacks Vadakooran to death. This is the turning point of the story and we cut back to the present, where Sivasami and his son, his wife and daughter and his brother-in-law all go different ways, escaping to the wind to escape the heavy handed retribution that would soon follow.

This movie is about Danush the actor. The way in which the initial scenes unfold, I doubt if any other actors would have done justice to this role. But this is a Vetrimaaran-Danush team and of course our expectations are stratospheric. Given such a broad generic canvas, of a feuding set of families against the backdrop of casteism, the question on my mind was what masterpiece touch was Vetrimaaran going to bring to the table. We need not have worried.

Asuran unfolds like a multi-layered embroidery, each little stitch shiny and bright adding to that final glorious tapestry. A character driven action drama filled with memorable characters who sear their way into your heart, given the brilliant performances. Pachaiyamma, played by Manju Warrier, is a woman who never cowes down. Despite her husband being a drunken pacifist, Pachaiyamma is never a meek woman. She thirsts for revenge against the injustice done to their family by the landlords. Her eyes are fiery and her words are acid. Manju Warrier is one of the finest actors from the Malayalam industry and she definitely brings alive this character. Pasupati plays the role of Pachaiyamma's brother and is in fine fettle, as usual. TeeJay, who has a brief role as Murugan, impresses well enough. And then there is Ken Karunas who plays the role of young Chidambaram, the cause of all the trouble that Sivasami's family is pitched into. Still young and maturing as an actor, he is mostly in Dhanush's shadow but there's ample potential and time for him to grow into his own. 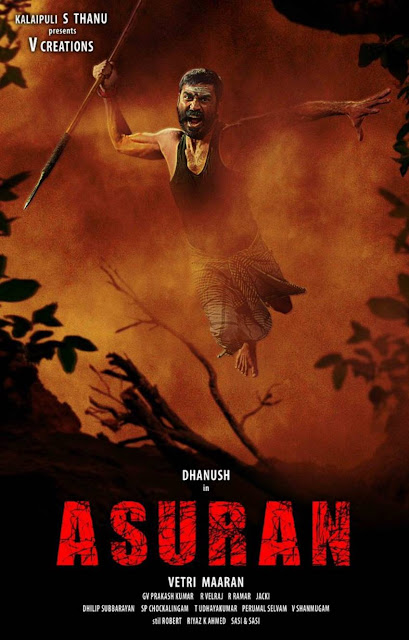 That leaves us with Dhanush. Absolutely mesmerising with his portrayal of a broken man who only wants to protect his family. Almost the entirety of the first half of the movie, he never raises his voice. There's a scene where Sivasami falls at the feet of every villager in order to get his son Murugan out of the jail. And comes back home to collapse. (And out goes all macho hero tropes!) Vetrimaaran plays his cards well, making us viewers chafe and squirm, waiting for the devil to be let out. For the blood fest to begin. Because we know, the demon's going to rise.

And rise it does, just before the intermission. A brief cat-and-mouse game ensues where a bunch of forest trappers are hot on the trail of Sivasami and his son who have managed to escape the clutches and are silently making their way through the forest and mountains. But they do finally catch up and when Chidambaram's life is in mortal danger, the protective father roars out and finally wades into the fight. Possibly there are camera-stills and slow-mos here,  pandering to the star-value of Dhanush but that takes nothing away from the frenzied, delightfully choreographed action sequences that follow. The brief lull between the action-packed second half and the climax introduces us to Dhanush, the hot headed young goon in his previous life and what led to him changing into this meek, pacifist.

The narrative makes it a point to impress upon us that despite the passing of time, the 'demon' of a caste-based differentiation is still alive. Earlier the higher castes denied the lower ones the 'luxury' of even wearing a chappal. And now, it's their farm lands and thus, means of a livelihood, that is being denied to the hapless lower castes. The movie takes conscious potshots at the gulf in the society between the haves and have-nots and yes, it does some amount of a social preaching [ Pointedly, there's Prakash Raj's character, a brahmin lawyer who fights for justice and tries to breach that gap by fighting for what is right]

Asuran, for me, is definitely one of the best movies of the year [ And a funny coincidence that it released back-to-back with Kaithi, another brilliant action thriller from Tamil cinema] Not in the same league as perhaps Visaranai, but I liked Asuran much better than Vada Chennai (Sadly this trilogy is going to be shelved!) This one's a more linear narrative and shows us Dhanush in a completely new light, propelling the versatile and extremely talented actor to new highs.

PS. Asuran is now available on Amazon Prime in India and is truly worth the watch.
2019 Movies Dhanush movie review Netflix Saturdays