November 15, 2019
Jason Arnopp was one of my favorite authors when I read "Last Days of Jack Sparks" last year ( as with most of you, I am sure who have read that splendid addition to the genre of horror!) - So it was with a bit of a trepidation that I came in to read Ghoster ( was one of my most-awaited titles of the year!) 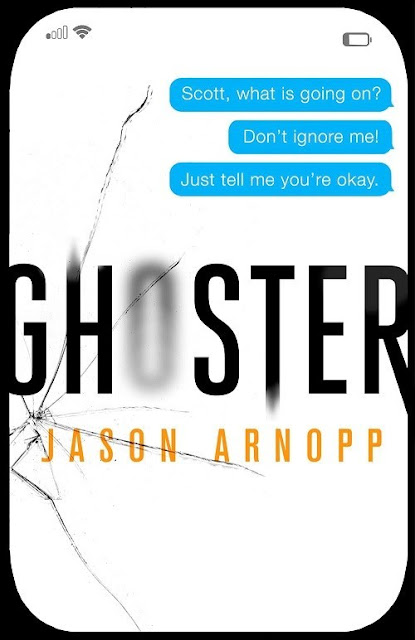 The premise holds a lot of promise - and creepy intrigue. Kate Collins, a paramedic is about to move in with her boyfriend Scott Palmer in the next two days but her lover has stopped answering his calls. Has he "ghosted" her? Kate, who suffers from a "smart-phone" addiction problem, first "super-liked" Scott on one of the popular dating apps on her phone, only to bump into him in person at this de-addiction camp. The initial 'like' soon turns into a roaring long-distance relationship with frequent to-and-for between Leeds and London until we come to that fateful day, when Kate discovers to her mounting horror that Scott has gone missing. Her travails have just begun as she moves into an empty apartment that overlooks the sea.

So the good parts, first.
The tension ratchets up page by page as we follow Kate on her desperate journey to uncover this mystery of her missing boyfriend. Is Scott a good guy? Or is he a bastard, who has ditched Kate but has been doing a lot of 'illegal' stuff on the sides, that Kate has been unaware till now. Every chapter is a hook, a surprising reveal about who Scott was - followed by a jump in timeline back to the whirlwind 3-months courtship period where a particular aspect of their relationship is examined under different lenses. The rose-colored lens of a desperate woman hungry for relationship. And then the cold lens of logic and deduction of a desperate woman hungry for answers. The mystery deepens, twists into weirder territories of inexplicable horror and then sinks into a deeply unsettling  dark whirlpool of insanity.

So far so good. And now, to my issues with the book. So quite frankly, despite the excellent pacing and the masterful storytelling skills evident here [ For about three quarters into the book, you wouldn't be able to prise the kindle away from my hands. I was a blubbering idiot, sinking into it, hook line and sinker. Baited by the mysterious videos of sleeping people, the claw-marks and gouges on the door handle. the infrequent iridescent ghostly apparitions and the over-arching desire to find out where had Scott disappeared to. ] I ended up not liking the book.  Don't get me wrong, this here is an excellent mirror to the evils of the present world. Our needs for self-gratification through likes and retweets on our posts on social media. Our desires to be frequently hit with 'dopamine' as we line out click-baits, forming that virtual alternate reality version of ourselves revealed to the world. It's an excellent running commentary dipped in satire and acid enough corrode through any of our cynical defenses for our addiction to such irrational behavior of being lost for hours watching the cute puppy videos and burning with envy at our friends' foreign vacations somewhere in the lost islands of paradise. Nope, all that is brilliantly concocted into the various episodes of Kate and Scott's life. And Jason is spot-on with all his wry observations of our depraved humanity that shuns real interactions for digital pleasures.

I just didn't like the weird inexplicable horror that the narrative melted into. It was a hot mess alright. There were just unbelievable sequences and Kate's emotional reactions to the situations were just plain warped. Perhaps her over-thinking highly self-critical cynical parts of the brain just got activated at all the wrong times. Her emotional core, that made her human and possibly vulnerable and thus likable, kept flickering but never really switching on through the book. That was my main grouch. I just didn't like Kate. While Jack Sparks was a total swine as well, there were parts of his personality that just shone up. Kate just had too much of a rational brain trying to justify every single wrong done against her. Like for example, chased by her own imagined demons, a slavering bloodthirsty rottweiler and possibly a deranged serial killer, Kate still manages smart-alec quips and self-deprecating humor. Sigh.

There is no denying that this book is written by a mastercraft writing close to his peak for sure. Jason Arnopp keeps pushing the boundaries of this genre with his unlimited imagination and aptly brings in sharp daily observations of life into play to make this a highly gripping mystery-thriller. A lot of genre fans will be happy with this book for sure. I am a fan of the author but not this book, specifically. I will go with a reluctant 3 stars out of 5 for this one.
2019 Books Book Review horror Jason Arnopp