October 18, 2019
I haven't read a book by Paul Krueger before this but if this book, which he claims is something that he wrote truly only for himself, is anything to go by - I will definitely be picking up more of his works before long. Steel Crow Saga was a pleasant surprise really - a breath of fresh air, inventive originality at play spinning together a tour-de-force of magic and wonder in a world, influenced by the oriental cultures. It's an epic tale of different cultures clashing, of identities forged and reforged, political intrigue mired in action and subterfuge all fronted by four vivid and really memorable characters, each a force to reckon with. I totally loved it and definitely would recommend this one to readers, looking for something new and wholly enjoyable. 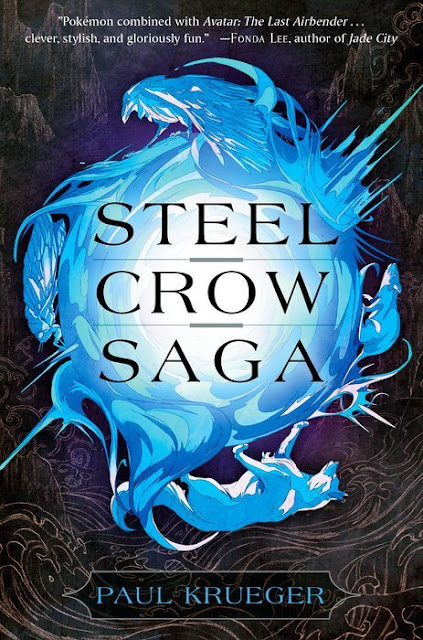 The story is set in the warring world of four different cultures - With our story starting at the end of a disastrous war between these cultures leaving their world burnt, men reeling and levels of tension very high. There is the Shang, ruled by an autocratic emperor known as the Crane Emperor who have tied up with their neighbours Sanbuna to overthrow the tyrannical invasion by the Tomodonese. The Sanbuna is a predominantly militant culture, distinguished by their citizen/soldiers' abilities to 'shade pact' - a practice where an individual is able to connect their soul to an animal's. Almost like Phillip Pullman's Subtle Knife series but these 'shades' are massive versions of the real life animal with fearsome fighting abilities. Led by General Erega, who's set herself up to rule this republic but is widely considered to be a great human being and a leader who inspires loyalty and courage. Even the Shang can 'shadepact' with their minds, choosing to 'militarise' their shades. The Tomodonese invasion was basically to strip out metal from the veins of rich ores in the Sanbuna regions as these folks have the unique ability to 'metal-pact', using their minds to forge and connect to steel. Their engineering capabilities thus, are highly advanced, including the introduction of concepts like 'driverless' cars in their cities. The fourth partner in this complex interplay are the Dahali, a predominantly mercenary culture that believes in commerce. Their magic is their ability to use their minds, creating weapons like 'hex-bolts' out of thin air, used like laser-guns.

Now the sprawling narrative begins with the introduction of the detective duo - Lee Quon-Jee, a Jeongsoneese thief and Xiulan Shang, a princess and heir to the Shang throne, albeit twenty-eighth in line. This first scene unfolds pretty dramatically and that sets the tone for the whole book. Lee, is a minority caste within Shang shunned and avoided by the rest of the Shang. But she doesn't care about the insults as she's grown immune to, her whole life. Unfortunately, looks like her luck has finally run out, been caught by the governor of the district where she pulled her last job and now she has been sentenced to die by hanging. But she is saved just in the nick of time by Xiulan, who reveals the undercover plot set in place by the Li-Quan (A sort of secret police) to capture the corrupt Governor himself. But as Xiulan reveals, this is the beginning of their partnership for the long haul. The game afoot is much bigger - the capture of the Prince and Heir to the Tomodonese throne, Jimuro.

Meanwhile Jimuro is being safely transported by the Sanbuna soldiers, under the care of Sergeant Tala who is the trusted confidante of their leader General Erega. Tala is always angry, seething at the hurt meted by the TOmodonese during their initial years of invasion that killed off her entire family. So she doesn't warm up to the spoilt brat that Prince Jimuro appears to be. Jimuro on his part, is still coming to terms with the fact that one day he may have to become the Steel Lord himself, ruling an entire nation responsible for their well being.

All their mutual hatred though has to be kept at bay - when a mad man, who has bonded himself to multiple shades, a dreaded 'splintersoul' and thus an abomination in all cultures, savagely attacks the ship and kills off Tala's entire crew. The soldier and her captive prince is now on the run - heading to a guarded safe house deep within the Tomodonese territory. Deep behind enemy lines, hunted by a powerful abomination, saddled with the heir to the throne who is crucial to all the peace talks being heralded by her General - Tala has definitely had better days.

The pacing of this novel is phenomenal. Paul is a master craft in plotting - bringing the several threads together, entwining to separate out later and then coming together in an explosive climax. His characters are brimming with life, well rounded, each with their own compelling backstories, going through effective development arcs changing their motivations and beliefs. They are all challenged, pushed to the edge and their evolution seems organic, critical to the overall storyline.

There is scathing humour in most scenes, sharp enough to cut and sting - truly the interactions between the detectives Xiulan and Lee is really enjoyable. Lee's crass no-nonsense cynical self is a great foil to the deeply empathetic, vulnerable mind of the clever princess. Xiulan is a bookish dreamer, forging her reactions based on the situations faced by her favourite fictional detective ( clearly a nod to Sherlock Holmes! There's even reference to his nemesis Professor Moriarty and the waterfall scenes before the Adventure of the Empty House!) Jimuro starts off as naive and arrogant, slowly going through the paces till he understands the depth of the horror inflicted by his countrymen's invasion and vows to make good on a meaningful apology. Tala is angry,  simmering with hurt at the loss throughout her life of her family and comrades but her relationship with Jimuro gives her a delicate perspective on her own life and antics as a solider. Forcing her to question her own motivations to mete out violence.

The best part of Paul's writing comes alive in his ability to illuminate the cultural nuances between the Tomodonese or the Shang. Like their preferences for food, their affinity to magic and their reverence or loathing to the differences in the magical abilities. In fact the whole novel is deeply characterised by this discerning ability of Paul to shine light on the micro and macro aspects of cultural identity. My only element of complaint, would perhaps be that towards the latter half of the book, Xiulan's and Lee's characters fade in to the background and the conflicts riding Tala or Jimuro take centre stage. I had quite enjoyed them, especially the snarky Lee and didn't want her chapters to end. In the beginning, there was little to distinguish between the Shang or Sanbuna cultures and I frequently got a bit confused. But with persistence, this fog cleared up of course. The larger plot line of the mad splinter soul is a comparatively weaker conflict compared to the individual story arcs of each of the main characters but I didn't really see any other resolution.

Overall, Paul's Steel Crow Saga is a fabulous read set in a richly detailed world, focused on Asian cultures, brimming with joyousness and hope, a beacon of light in this world of fantasy works tilting mostly to grim dark. This one reads like a standalone but I really hope there are more works in this stunning world that Paul has painstakingly drawn up. One of the best books, I daresay in this year that's been full of great books.
2019 Books Asian Book Review Epic Fantasy