September 02, 2019
So I finally managed to wrap up Stranger Things - 3!  Phew. Going to be frank, the third season ends spectacularly well - but it was a real slog to get through the initial four-five episodes till things really got going. 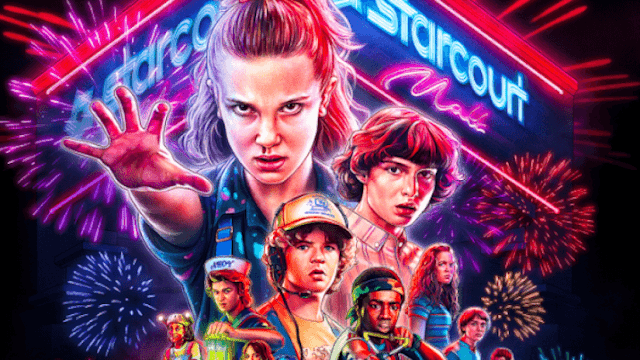 The producers/writers/director team have crammed in all things good from the previous seasons, cranked up the horror elements dial to beyond eleven (Pun!), thrown in some really messy, gory ingredients, stretched out a non-existent plot line to cover up gaping holes in the scripts but ultimately. reach the finish line, spewing exhaust and grit, grime and gore all over the place in a final blaze of well deserved glory. 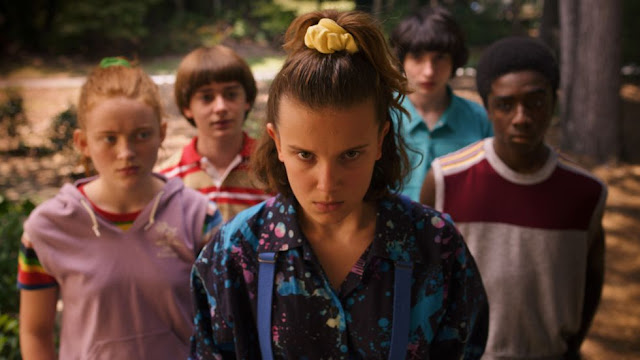 So cut to the chase: It's 1985. Hawkins is still a pin prick in the Great American Hinterland, the idealistic town in the middle of nowhere but now, the kerbside shops are giving way to the Great Mall of Starcourt. The kids have hit their teenage big time and thus, have their hormones raging. Mike and El are going at it, non stop discovering the thrill of their hormonal overdrives, kissing and in general ignoring the only rule that Jim Hopper has imposed on El. Namely, "to keep the door open at least three inches." Dustin's apparently found love in a 'science-camp' with a girl named Suzy whom nobody is ready to believe is real. Max and Lucas are tip-toeing around each other, bickering like married couples already. And that brings us to the star of the last season, Will. Hmmm...still there, trying to hold onto his sanity along with his D&D game board. (I really felt sad for his character. The writers of the show really didn't know what to do with this talented kid. Other than feeling a shudder at the base of his neck and quietly whispering, "He's here!" he really doesn't have any other play this season.)

David Harbour and Winona Ryder were the only known faces when the first season surfaced and became a runaway hit and a worldwide cultural phenomenon. In this season, their characters Hawkins Chief of Police, Jim Hopper and the retail shop employee Joyce get a lot of face-time. Clearly, the writers wanted to keep that spark lit. Sadly for most parts of the show, they are an annoying couple, almost too realistic with their constant bickering and arguments. It's only the last couple of episodes with the introduction of a two more 'new' faces to the cast, that Jim and Joyce finally hit their strides. David Harbour especially, is a sensation. King of Action-Comedy. Loved this guy. 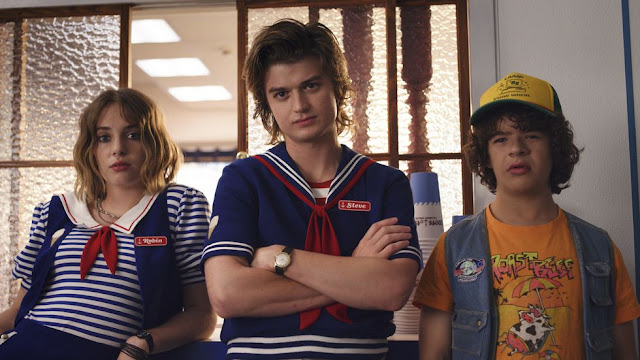 There are quite a few separate narrative threads running here in this season and we wait patiently for all of it to converge and the patterns to become clearer. Gaten Materrazzo's gap toothed smile and annoyingly goofy jokes apparently deserved a separate storyline. Last season's MVP Priah Ferguson as  Erica, Lucas' genius sister has a much more meatier role this whole season. Also a welcome addition of course, is Robin played Maya Hawke (The genes of Uma Thurman and Ethan Hawke in glowing display!) who overcomes her contempt for the dunder-head Steve Harrington (Joe Keery) in their workplace scooping ice creams and slinging insults at each other in the Mall foodcourt, to become good friends with him by the end of their shared turmoils.

Another breakout performance was Billy - the loveable rogue with the mullet-cut hairstyle, who very early on the series, goes through some serious "change" of character.
Another favourite moment of mine was El (Millie Bobby Brown) repelling the horrific Mind Flayer's avatar as the spider on blubbering sloughy legs and generally on amps. She's talented to the core, perhaps the best of this lot and she puts all her anguish and heart and soul into the performances. As the only one with super powers, she's frequently in the thick of all action. She continues the fine fettle of the last couple of seasons, mature beyond her age. ( Sadly, a bit of a downer for Mike, played by Finn Wolfhardd who paired opposite her, comes across as a bit of an unfinished product of an acting summer school)

This still remains a trip down the sepia-tinted nostalgia lanes of the 80's. Though, I did feel things, picking up pace beyond episode-5, got a lot more darker, very soon. Tons of references to some of our classic favourite movies from that time, including wait for it, Back to the Future!! The relationship dramas quickly get past the point of annoying to wistful, the fun elements are amped up, villains loom across multiple fronts ( including "those commie bastards' Russians!") and the last few episodes are some of the best yet. But all in all, a well deserved brilliant return to form! Summer in America's favourite hinterland spooky town haunted by doctors in white lab coats trying to always open the damn portal to Upside Down, is absolutely thrilling. Welcome back to Stranger Things in its rightful avatar!
2019 Movies Netflix Saturdays Stranger Things TV Series