Kingdom of Souls by Rena Barron

September 22, 2019
I admit I do not read much of YA novels these days as much of the stories usually fall into the trap of being a rehash of ideas, done to death. And so it stands that Kingdom of Souls, by Rena Barron is a debut that pleasantly surprised me with its stock of original ideas, extensive and lush worldbuilding mixing in West African folklores and rich imagination. 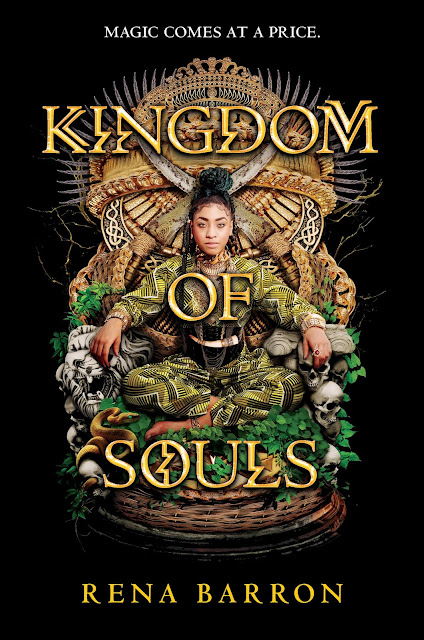 Having finished the book though, I am in two minds about giving a higher rating for the book. Simply because despite the stunning originality and some solid ideas, I found myself drifting off course due to its slowburn of a pace right till the late second half of the book. But the last quarter of the book, especially after the introduction of a new character, the story really takes off on wings; literally a freight train steamrolling you as the action, intrigue and mysteries pile on to become a tour-de-force of an ending. This is where the mythology and the plot fully comes into its own. Even Rena's writing took on a brighter shine in these parts of the novel and this elevated what was till then, a pedestrian story, into a memorable epic fantasy.

Coming down to the story itself, this is a first person narrative of a sixteen year old's quest for magic and redemption. Which ultimately spirals down into darker truths, involving a centuries old feud that has been brewing over eons between the Orishas (the  Gods of this land) and demons. Arrah is the face of the hapless humanity caught in between this titanic struggle. As we meet Arrah, she is a teenage girl without magic, born to two of the most powerful magicians in the Kingdom who finally has to come to terms with the disappointing truth that she may not possess an ounce of magic. Her mother Arti, the third most powerful figure in the Kingdom, despises her weak daughter while her father Oshe tries to console his heartbroken daughter. Her only consolation in life are her close friends whom she has grown up with. Her best friend, Rudjek just happens to be the heir to become the Vizier to the Kingdom, the second most powerful man.

Arrah is a strong willed and determined young woman and she still seeks to get the approval of her mother, having grown up distant and yearning for acceptance. Arrah is also a highly empathetic person, who makes instant connections to the poor and suffering around her. And so when it comes to light that someone's been stealing children away in the Empire, she suspects something big is underway. Disappearance of one of her 'adopted' younger brothers pushed her conscientious mind  to seek magic through unethical means to right this wrong and find out the truth behind this foul play. But what she discovers blows her mind away as there are darker forces at play scarier than her worst imaginations.

Quite a few twists and turns in the narrative with shocking revelations that keep you on your toes throughout. Rena's debut is set in a wonderfully realised world, inspired by West African mythology. You can almost hear the rhythmic drumbeats, smell the exotic herbs and marvel at the details of the traditional practices of the Witchdoctors and the varied religious nuances or the social behaviours detailed very well by Rena. The descriptions are vivid and brings the landscape alive as we tread past deserts, stone-pillared temples or dark forests. Her magical systems are also well thought out and detailed, focusing on Gods who bless the humans with their abilities that differ from one tribe to the other. Quite a few interesting 'magical beings' are also brought into play like the Craven who can resist magic. The concept of Orisha, gods who controls various elements of Nature was a great concept and Rena brings in a masterful twist into their roles as the story progresses, weaving that in organically into the proceedings. The Twin Kings, Kore and Rec'Mec [ The Moon and the Sun Gods ]  get the maximum facetime on the pages and they don't disappoint at all.

Rena's debut though is not without its flaws. Her characters, unfortunately didn't work their magic on me. Arrah is an interesting mix of quiet strengths and vulnerability. Her yearning for love and acceptance overrides her natural intelligence and she frequently stumbles in her decision making. While her vulnerability does make her a relatable heroine you want to get behind of, I found her frequently going off-script with her irritating habit of mooning for Rudjek, her best friend. Their hesitant love story never quite takes off [ and there's of course strong secrets behind this!] but them playing footsie around each other was just a dampener slowing down proceedings. But her character growth is definitely arresting and with how Book One ends, I think I am hooked on.

Rudjek is Prince Charming but till the end quarter of the book, I really fell for his saucy charms. It is only after a major development in those last few chapters that Rudjek really grows into his own. Arti, Arrah's mother the chief priestess of the Kingdom makes for a compelling character, a mix of contradictions. The rest of them kind of didn't really make an impact. But my favourite character of this whole book actually doesn't even come into play, till the last one-thirds of the book and for fear of any spoilers, I am just going to keep mum and let you readers experience this in first hand.
The second issue was the uneven pacing. While the narrative is a melting pot of strong original ideas, Rena's pacing is completely off-kilter. But stick with the slowburn as things get murky and super interesting by the last one-third of the book.

Overall, this one's a solid debut packed with amazing ideas, an exotic world that comes truly alive frontlined by a plucky heroine who stands in the way of the deceitful Gods and the wily demons even as larger prophecies and conspiracies shape the fiery world around her. Despite issues with pacing and some level of characterisation, Kingdom of Souls definitely paves the way for Rena Barron's future potential as a fantasy writer to watch out for.
2019 Books Book Review Epic Fantasy