September 17, 2019
Let's get this out of the way first. Yes - it's a Jay Kristoff book. And that guy is right now everywhere! [ Dark Dawn just released and it's a bestseller for all the good reasons - I am on that book right now, more on this later!] But Illuminae was probably an experiment. That went wildly successful. What else can you say about this beautiful beautiful book ! ( I mean literally! The physical copy of this book is a visual candy layered with all sorts of gooey goodness shots! It's an amazing piece of art!] 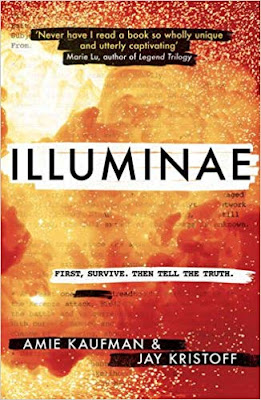 A talented writer duo belting out a concept that bordered on insane: A space warship guiding a research ship adrift in the outer reaches of space somewhere, homeless and also hotly chased by another dreadnought hell bent on blasting them both out of existence. And well, when the future of everybody on-board depends on just these two teenagers, driven by heartbreak and longing for each other, that makes for a very thin premise indeed. Add to that, a bloody zombie outbreak in zero-gravity? Fucking unbelievable, yeah. And then to make matters worse, all of this is delivered in a non-personal epistolary fashion through letters, emails, memos and analyst reports.  So, you can imagine the kind of skepticism with which I approached the book but the world was afire, singing praises about this series and I couldn't let my curiosity rest.

Well, they pull it off. They stick the landing and how! You got me eating out of your hands, Jay and Amie and I mean it. I am setting off to buy the next two books in this series, convinced that it's a good thing to have that full series now.

The art-work and the novel concepts drawn into this book are nothing less than amazing. Bewitchingly beautiful and very imaginative. The story is definitely a feat of wild imagination. There are just too many things thrown in here for good measure to keep you hooked. There's raging teenage hormones up front and central. [ With Jay Kristoff, I think you just cannot escape this, huh. It's a thing with him. The heroine has to be a teenage girl!] but layer on top of that a race in the outer space between spaceships trying to blast each other to smithereens. And then when that countdown goes past zero, throw in a viral infection that turns people into mad zombies in the zero-G space. And while all this is going on, slip in a rogue AI. Yeah, fuck me upside down.

So, here's the lowdown on the story: Kady and Ezra are high school students, who escape a brutal bombing of an out-station mining planet by a corporation known as BeiTech, trying to disrupt the operations of their rival corp WUC that was running an illegal mining ops there. Kady and Ezra are separated, Kady landing in the research spaceship Hypatia while Ezra is in the warship Alexandria. War-times calls for hard decisions and both are tested and conscripted into different teams. Kady, despite her best intentions at masking her ferocious intelligence, gets assigned with the systems engineering tasked with keeping the intelligent systems that run communications and other vital operations across both ships alive while Ezra, makes a fighter pilot on the warship, tasked with protection duty. Because the danger is far from over. The BeiTech dreadought has only been stalled and not completely beaten down. And both the leaders on Alexandria and Hypatia know its only days before the enemy ship catches up. It is closer to six months to reach their closest planet destination called Heimdall. And to make matters worse, the AI that has been running Alexandria, might just have gone mad.

All of this makes for an incredibly intense space thriller of a read as we hurtle along in the far reaches of the galaxy locked in wits against a rogue AI. The future of the survivors rest on the tiny shoulders of these two teenagers, even as the odds keep mounting. Kady takes front seat, in terms of being that absolutely ballsy, precociously intelligent teenager who’s sense of duty and honor is non-such. Initial interactions – emails, interview transcripts and video footage analysis reveals much less of Kady’s real character. She comes across as the self-obsessed highly intelligent, ambitious little girl who only wishes to get out of that ice-pick of their planet and roam the world. Her wishes come true, in the direst of the circumstances. But slowly, the authors peel the layers off that indomitable front that Kady puts up, to reveal her inner feelings (cleverly by inserting bits from her personal (digital?) diary) and the size of the demons that assail her. Kady is devastated at being separated from her mother and still hasn’t come to terms with that loss. She is also a teenager struggling with the emotions of heart.

Namely, her feelings for Ezra, the lovable rogue in the quintessential Kristoff mold of ‘hero’. A funny irreverent rascal who loves to be a rebel but is a hopeless romantic. Ezra is warm, funny and a total badass when it comes to being a fighter pilot. In a clever illustration, there’ are a couple of pages (creative mindblowing visuals!) that trace one of his heroic outings into the space to thwart the enemy shooters. Basically, a big teddy bear who speaks snark and sarcasm as fluently as his mother-tongue.

There are of course other characters throughout this “dossier” of information that traces these harrowing six months in space. Like the captains of both the warship Alexandria, General Torrence and leader of the research vessel Hypatia and a few of Ezra’s pilot buddies and Kady’s mentor David Zhang who becomes the sensei to her grasshopper guiding her through the maze of illegal hacks that helps them uncover the sinister happenings aboard Alexandria, because of…wait for it...the rogue AI.

Yup. AIDAN has the colorful personality of a Greek philosopher poet. He breaks off into existential musings every now and then. Despite being a program of 1's and 0's, AIDAN’s nerd personality mixes up even humor and sarcasm into the mix by the end of the book. His interactions with Kady makes for some super entertaining reads for sure.

The book is fun. Period. Despite the craters of logic-less-ness that litter the moon-front, this book is a beautiful experience. Invoking laughs, heart break, heart stopping tension and terrible suspense, it’s a human story that looks at survival and humanity in a different but interesting manner. There are twists and turns and even the final revelations are gut-wrenching, making this a book impossible to put down and ignore, once you’ve got ensnared into the world of AIDAN, Kady and Ezra.

Take a leap of faith. Trust me, you think an impersonal account of crazy shit going absolute bonkers bat shit crazy in zero gravity, conveyed through mails and memos won’t hook you at all? Think again. Time to get illuminae-d then. Strap on your seat belts and venture out into the space. But don’t forget, to look over your shoulders. The horrors are unimaginable out there.