September 06, 2019
Bloodchild is the third and final book in the debut series by Anna Stephens. Back in 2017 when Anna's debut came out, I actually gave it the skip. I was inundated with other "good" books - in particular, two other debut authors (Anna Smith Spark (Empires of Dust) and Ed McDonald's Ravencry caught my attention. 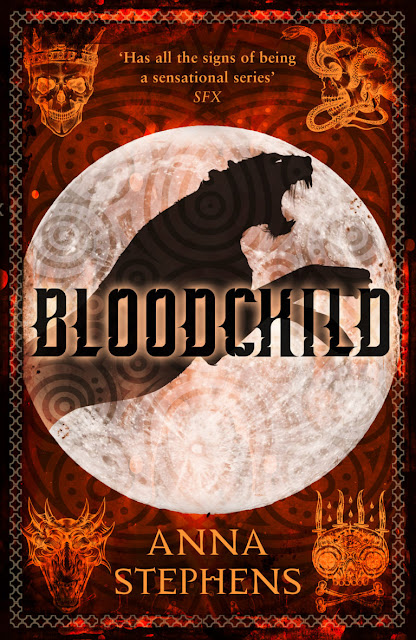 I was late to this series, starting on Godblind only last year but that was a boon in disguise. I read Godblind and DarkSoul back to back. While Godblind was good, Darksoul wasn't just great, it was brilliant. A heart-rending emotional upheaval of a journey. A long fuckin' siege that went on and on, presenting drama of the darkest kinds - desperate, terrified humans fighting ugly for their very lives against forces much larger than life. And after finishing both books, I couldn't wait for Bloodchild!

Bloodchild released in the UK yesterday (Sept 5) and trust me, this year-long wait has been more than worth it. To jump back once again to the dark corridors and blood-slick floors inside the walls of Palace of Rilporin where gory backstabbing is the norm. To wander the dark swathes of forests and rain-hit mountain ranges beyond that Palace in search of treacherous allies to shift the tides of a losing hopeless war. To plunge back into the shrewd mind of a General destined to be King shoring up his last reserves for one more fight. To feel the pain and hollow emptiness of a ravaged mind of a seer, left to suffer the consequences of perhaps the greatest feat in that last war.  To feel the love and warmth of a Trickster God whose last reserves of energy and blessings might not be enough to bring solace to his loved ones. Once more to feel that scathing madness and the knife of red hot vengeance craved for by the enraged followers of the Red Gods. One more time, into the minds of an escaped slave, now a pregnant mother whose child may change the destiny of this world.

Be fairly warned: Now that this series is completed, anyone coming new to the world of Red Gods, be prepared to drop everything else and be sucked body, mind and soul into this stunning world. It will wrench your heart out. That much, I can guarantee.

Bloodchild reunites us with all of our favourite characters in this series ( Well, of all that actually made past that mad, harrowing desperate siege in the DarkSoul and survived all the treachery!) As with the previous books, the story is grim-dark, splattered with gore. It's the last battle for survival for the Rilporians, now slaves to the rule of King Corvus and the ruthless Mireceans. Having ousted and utterly decimated the Palace Rank and the West Rank, Corvus now is not just a warlord but ruler of the state, preparing Rilpor to welcome back the Dark Lady. But this victory is hollow, having lost their Goddess. Even the God of War Gosfath seems directionless and hapless. Lanta no longer trusts Corvus to keep things in order and their mutual animosity leads to frequent clashes. There is a growing sense of unrest among the slaves. Major Tara Carter, formerly of the Palace rank, is now the property of Valan, the second  in command to Corvus but her spirit remains unbroken and she has just one aim in life. A mission entrusted to her by the Fox God and she is determined to see it through, riding on the back of a slave rebellion.

Outside the Palace, General Mace has safely led the survivors to where the South Rank is camped out and is planning on doubling back, licking his wounds and shoring up his reserves for one all out attack. He is also hoping that he gets some help from allies. And Crys Tailorson, former captain and now a God with the soul of Trickster inside him, along with his love, Ash Bowman, the archer from the Wolf Lands, is out on this mission. To the neighboring land of Krike to enlist their help to oust the usurpers from the throne. Dom, the Calestar is now a broken shell of a man, wallowing in self-pity and bearing the guilt of having banished the Dark Lady into the Afterworld, cannot think straight. The only thing that keeps him going is Rillirin, who is now pregnant with their child. Rill however, is having her own adventures. Being the target of all Mireceans, who believe that her child is going to be vessel that the Dark Lady will occupy on her second coming.

All the different threads come crashing together by the last quarter of the book in a terrifying conclusion of all the events leading up to the birth of the Bloodchild. Prophecies ring true in the most horrific manner. Forces clash with each other. Gods rip the veil emerging onto this world, once again with cataclysmic consequences for humans.  Anna ties up the various threads, sticky with the blood of heroes and some of our favorite characters. But this.... is how a series should end. A soul satisfying but heart rending conclusion to the various character arcs. Darksoul featured deaths of some major POV's and we knew, Bloodchild was going to be the end of the road for some of our beloved characters but Dancer have mercy on her soul, Anna Stephens guts you bone deep and then twists the bloody knife in, for good measure.

There are some big set-pieces of savage show down between the Rilporians and the Mirecean army. And Anna is now a past master in setting up these huge conflicts, with army drills, cavalry charges, mad But what stood out for me were the more intimate personal fights with Tara. Her dauntless courage in the face of overwhelming odds to still continue her mission is the stuff of legends. In a normal epic fantasy novel, the pregnant woman is possible sidelined after giving birth but in Stephens' world, Rill despite being heavily pregnant kicks ass and travels across places. A true mother bear who will take on the tigers for her cub. A crippled seer who cannot seem to get out of his own deep well of guilt and self pity for most parts of the book, Dom the Calestar still remains one of the anchor points of change in this whole series. Will he betray the Dancer yet again was something that kept me glued to the books, despite his character being that highly annoying whine-star. Mace, sadly typecast in the "hero" mold sticks to his guns - nobility, honor and bravery being the defining characteristics about him. possibly one of the cleaner guys, bathed in the Dancer's Light who couldn't lift a finger wrong. While the wolves don't really get a POV, all the featured ones still alive by book-3 get my full vote for being the lovable rascals they are. Ash and Dalli chiefly.

With Crys-Foxy-Tailorson, Anna clearly expands her world beyond just the streets of Rilporin. As he is tasked with bringing in new allies that Mace's rag-tag ranker army can expect, help from. Crys remains a charmer and his relationship with Ash remains the high point of this whole series. His emotional journey comes a full circle as Crys realizes that as Fox God, his role in the prophecies and in thwarting the Dark Lady, is one of the most important ones. Can't deny, my eyes were moist as I read his chapters.

Anna retains her evocative prose, immersing us into the blood-spattered narrative as the fight between the two faiths continues. The intense action never lets up, except to show us the uglier side of that religious frenzy - a fanaticism that reaches a desperate harrowing peak by the end of the series. The mind-numbing twists and backstabbing continues. And yet all of that builds up to a logical end-game with the Bloodchild. Anna buoyed on by the thrust of an immense momentum coming off the first two books, signs off this incredible series on a deserving high with this third book. It might just be my favorite book of the whole series, emotionally for me.

Dancer's grace, my dear heroes! You will always stay in the light. Such a wonderful journey and I am glad I was able to make it with you guys. Stay blessed. I cannot wait for Anna's new adventure, to explore the new worlds that she might be drumming up.
2019 Books Anna Stephens Best of 2019 Epic Fantasy Godblind GrimDark