August 30, 2019
The Poppy War was a book that I never knew, I was craving for. I finished, nay I gobbled up this powerful, epic coming-of-age story set amidst a disastrous war that follows the destiny of this young girl from rural south in a kingdom ravaged by war, whose every step to success is drenched in blood and suffering - all this in just a few sittings. And as I finished it, my first thought was that this....was absolute magic. Such compelling heady stuff that it is hard is believe it's the debut work of Rebecca F Kuang. 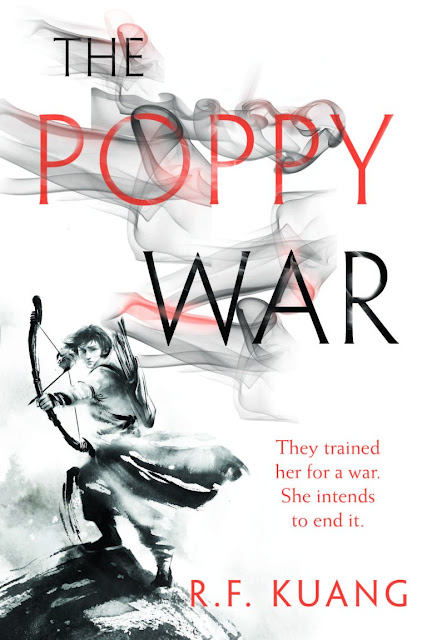 Inspired heavily by the Sino-Japanese wars of early 1930's, the epic fantasy setting is that of the sprawling Nikan Empire where young Rin, a war orphan suffering misery and servitude in rural south, has just figured out that her only way out of this cruel life is an entry into the Military Academies - and not just any academy but the highest one called Sinegard that trains the scions of the actual Warlords of the various provinces of Nikan to become Military officers. For this, she has to ace the "Keju", an entrance exam with hardly any time on her hands, being worked to death by her adopted family in their opium business. But Rin is an extraordinarily strong willed young woman and her determination sees her through most difficulties. Like even acing the exam to get placed into Sinegard. But this success is just the first hurdle in her difficult life.

The first two parts of the book focuses on Rin's experiences within the boarding school. It almost reads like a YA book - petty rivalries, jealousy, prophecies, the martial arts training, the eccentric Master, the secret crush and the budding friendships. We are also introduced to the magical system, shamanism that let's people's mind become conduit to Gods. Rin pledges to study 'Lore' at the academy with the eccentric Master Jiang who promises to teach her the ability to commune with Gods.

But all this is just petty side-drama to the larger disaster that befalls the entire empire. Rin and her friends in the academy haven't even graduated before a full-blown war breaks out. The neighboring island nation of Mugen has invaded the shores of Nikan and is rapidly expanding across provinces. Bringing the war to the gates of Sinegard as well. This is the third part of the book. By this time, though Kuang has already established the stubborn character of Rin, one who doesn't take no for an answer. Kuang has also cleverly slipped in broad swathes of the larger world building through historical lessons, puppet stories and a lot more such brilliant  elements, very endemic to the settings of this world. Rin is a special one (Duh!) but her ability is not just martial arts but her nature to use magic. Kuang again is extraordinarily brilliant in her inventiveness bringing Gods into the fray, to be able to tie one's mind to that of a God, thus granting the user power. Rin exhibits affinity for one called the Phoenix and thus, fire.

This also leads her to be drafted into a special company of soldiers called the Cike, a small platoon of oddball misfits banded together for their magical affinity. But as far as Rin is concerned, this is all ok because she is now united with her academy 'crush' Altan. Who was the rising superstar in that military academy and is now, been given the impossible task of 'commanding' this unit.

The third part of the book is solely focused on the increasing despair, gloom and horror of the war that has taken on an ugly form, spreading inward into Nikan. Be warned, there are quite a few horrifying descriptions of the aftermath of the invasion that is stomach-curdling stuff. Kuang takes off the kid gloves here and doesn't hold back in her vivid descriptions of torture.

Her writing is simple and straight forward which helps the cause as it's a fairly fast paced read despite being a 500-plus page book. The pacing is even, spluttering at a few points during Rin's early school days and perhaps some parts of her initiation into the Cike, but in general I have no qualms. Apart from Rin, the ones who endeared to me of course were Kitay and Altan. But ultimately, Rin being the central point of view for the whole novel, we don't get to see much of A

But it's the journey that young Rin undergoes in the process of this whole war that makes for fascinating reading. From a strong-minded young girl determined to succeed to being war-conscripted into the most difficult company perhaps tasked with 'winning' situations at all costs. Both Rin and we as a reader, don't realize the lines that she's stepping past in her quest for, what she perceives and is taught, as success. Being only nineteen at the times these events transpire, you think that perhaps she is too far young to take note of her moral descent sliding past slippery slopes that she needs to navigate,  while grappling with life and death decisions. Then again, during war those lines between the good and the bad blurs and is mostly obliterated.

This is a towering work of epic fantasy which despite the lurid war descriptions and trappings of grim dark, shines bright. Rin's story arc is poised on the edge of a precipice right now and i am very curious where Rebecca is going to take little Rin to, in The Dragon Republic.
2018 Books Asian Book Review Epic Fantasy RF Kuang