The Passengers by John Marrs

August 26, 2019
This was an unassuming little thriller that crept up on me, completely unannounced. and what a compulsive addictive thrill-ride it was - Passengers by John Marrs is my first book by the author and it certainly won't be the last. [ Indeed, another of his titles The One apparently is being made into a ten-part Netflix series, I certainly want to check it out before it hits the screen!] 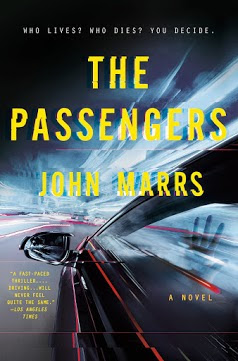 Anyways - being closely linked to the whole AI phenomenon at work, the premise (And the delicious promise!) of this book got me hooked straight away. A world where driverless cars are norm on UK roads - and what can happen, if a Hacker gets access to the artificial intelligence servers to control the lives of the passengers within? All too plausible. With the whole debate around ethical AI gaining traction around the world, this was a very topical book, extremely cleverly executed as well.

John Marrs draws us in, reel by reel with the unexpected plot twists and cliffhanger chapter endings galore, keeping us  guessing and on our toes. His writing was absolute mastercraft in itself.  The racy narrative starts with each of the eight different passengers, who get locked into their own autonomous vehicles and are programmed for a specific location with the warning that within the next two and half hours, they would all be dead. A mysterious Hacker calls up this highly secretive inquisition committee, appointed by the government to enquire into and clear accident cases involving the driverless cars. Libby Dixon is a common civilian, drafted into this committee, the only one with enough balls to stand up to the officious MP Jack whose only agenda is to clear up the machines and get this farce dealt with, as soon as possible. But Libby, the rebel with a cause, is probably the minority few who dare to take an alternative stand. She's gutsy and outspoken and brings her brimming passion to this seemingly mundane "jury" duty where typically the civilians are drafted on, as an afterthought to perhaps keep the humanitarian NGO's silent on the streets. But the manner in which Libby pokes holes in the unflappable MP Jack's arguments for the machines raises quite a few flutter. But with the massive terrorist attack on British soil, lots of big guns swing into action. Cameras are trained on this small committee and very soon, the Hacker starts dictating his terms. It isn't a very pretty scene. Devolving into a "game-show" with audience polls, 'phone-a-friend' and other 'features'. But then, real lives are at stake here!

John Marrs also brings in his well research POV on how Social Media today dictates news around the world - the power of the many, albeit uninformed opinions and thoughts, that shape destinies on the internet and spill out into the physical world. The frenzy of fear, multiplied million times over through clicks and baits on the internet, feeding millions across the world, is an ever-present 'character' in the background as this nerve-wracking drama unfolds on the roads of Great Britain. Even as the Hacker starts to reveal his intentions, it is clear that this 'kidnapping' goes beyond just making a public social media statement. There are twisted lines of connections between many of the passengers. Even Libby's past is linked to one of the passengers. What does the Hacker ultimately want? This was a question that kept me flipping the pages faster.

What also kept me glued to the pages was how John builds up each of the individual characters, rendering them as not just two-dimensional flat victims but making us care. At least for some of them. While some came across as too unbelievably 'flaky' ( Like the fading actress who refuses to believe that this stunt is nothing more than real-action TV that is set to get her publicity soaring again!). The family drama between husband-wife duo each stuck in a car about to explode as they play cat and mouse game with each other as well, just seemed preposterous as well. But staying my judgement on that, all this of course made the whole drama heart-rending and fragile, so to speak. But what mattered was John sets up his thrill sequences pretty well, unlike half hearted attempts at emotional upheavals.

There is a sort of disturbing prescience in the whole manner that the future written by John Marrs comes to play. Food for thought, yes. I did feel however, the science fiction elements weren't really central to the narrative. Yes, autonomous cars and perhaps a few more concepts were alluded to but it all felt more post-modern in terms of a near-future way of living than science-fictional. The Passengers is a non-stop thrill ride, a great potboiler of a read on a 2 hour flight that presents a dismaying picture of the reality that might clog up our futures if we aren't careful. And it all again boils down to the fact that there is no such thing as an unethical AI. Ultimately it's us humans that program these 'robots' that may dictate our future. Don't be surprised, if this one's becomes your next summer Hollywood blockbuster from Michael Bay. Exploding cars, exciting chase sequences, edge-of-the-seat action. Mark my word, it is coming.
2019 Books Book Review Tour John marrs science fiction thriller