July 17, 2019
Malayalam film industry is a touch above the rest of Indian cinema when it comes to making original stories of the soil, come alive in myriad colors. It's a bold statement but when watching movies like Kumbalangi Nights by Fahadh & Friends, this claim clearly doesn't seem outlandish and I am convinced this is the right direction, we should be moving in.

This movie is a fascinating portrayal of the cracks and fissures spider-webbing through the thin patina of a sleepy backwater tourist haven. Kumbalangi Nights rips through the concepts of dysfunctional families and even the toxic masculinity that has been the focus on many a malayalam movies for long. Aided by a fabulous, perceptive script[ written by Shyam Pushkaran ] debutant director Madhu C Narayanan brings to life, the lesser aspects of the idyllic life on a fishing hamlet, going beyond the happy facade presented to the tourist. Delving deep into the uninspired and almost wasted lives of a family of brothers. Saji, the eldest one and Bobby are constantly at each others' throat, squabbling all day to the dismay of the youngest one, Frankie, who despite being just a teenager, seems to be the most sorted of the lot. Frankie dubs their house to be the "worst" one in the whole Panchayath and not just because of the lack of a proper toilet in the house. In fact, his reasons run deep, prodding at the broken familial strings and the bitterness that colors through their daily meaningless existence. Bonny, the second oldest brother doesn't even stay with them, preferring the company of his dance troupe to keep his distance from the shanty hovel that represents shattered dreams and strained relationships, that would seemingly never set back straight. 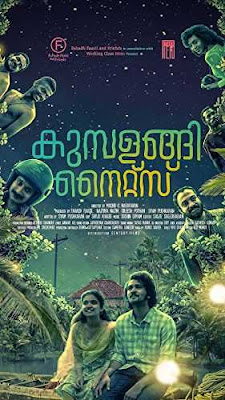 At the core of it, the story is about redemption and about finding love, forgiveness. Each one finds their own purple haven of peace and this whole arc ensures that the characters [Specifically of the brothers, at least the two main guys - Saji (Soubin Shahir) and Bobby (Shane Nigam)] find their way out of the rabbit-hole they had dug themselves into. Bobby falls in love with Baby mol (debutante Anna Ben with a smile that will light up her childish features and the whole screen) and Saji, in a cruel twist of fate, ends up having to take care of his best friend's wife after his unfortunate demise. It's a beautiful movie about hope and finding purpose for oneself and the redemption arcs of all the characters are immensely satisfying. It feels natural as different pieces of the seemingly unsolvable puzzle slowly clicks into place. There are roadblocks through this journey and this keeps the narrative bumping along, never boring even at it's nadir points. One of these 'blocks' pivotal to the motives of the central characters, is Baby Mol's brother in law, called Shammi. [ Played by Fahadh Faasil in one of his most memorable characters ever onscreen!]

Madhu peppers his story visuals with psychedelic effects of the starry night skies, the lit-up circles in the water and the mesmerizing spread of the fishing nets that symbolize a way of living for the folks in this backwater hamlet [ excellent camerawork by Shyju Khalid that takes you deep into the soul of Kumbalangi] 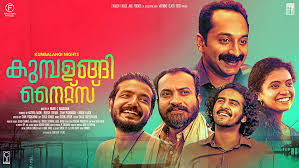 The movie of course is elevated by stellar performances by the whole cast. Right from the youngest sibling Frankie [ Mathew Thomas ably holding his own against the experience of his older acting companions has a lot of potential!] to Simi (Grace Antony) the coy wife to Fahadh's menacing Shammi-chettan. But three of them stand out - and I had to speak about these.

Shane Nigam is quickly rising up to be one of the most bankable youngsters in Mollywood and Kumbalangi Nights is again proof of how versatile is this young actor. Some compare him to a young Lalettan, praise of the highest order but I do like his screen presence and his emoting range.
Soubin Shahir is an acting Masterclass by himself. Playing a lot of side comic roles, last couple of years has seen his star shine and how. If Sudani from Nigeria wasn't enough, then Kumbalangi Nights he definitely outdid himself. Absolutely brilliant, riveting watch. And then there is Fahadh. He plays the villain,  believe it or not. Shami, the complete man who over-protects his household of three ladies. His wife, sister and mother-in-law. His very presence on screen sends shivers down one's spine, that fake smile and his fawning, obsequious manner will creep you out. He's a total class by himself and I absolutely loved his characterization.

Kumbalangi Nights makes an easy bid to be one of the best movies of this year and perhaps, last few years standing tall on an amazing script brought to life by some brilliant camera-work and inspired directing, played onscreen by a bunch of talented super-actors. This is a must-watch and it is available right now on Amazon Prime.
2019 Movies Amazon Prime Best of 2019 Fahadh Fazil Malayalam cinema movie review Netflix Saturdays