The Wolf in the Whale by Jordanna Max Brodsky

April 04, 2019
I admit, I have never read the Olympian Bound trilogy - the first series by Jordanna Max Brodsky. So I came into The Wolf in the Whale, fairly oblivious to Jordanna's amazing talent. Which kind of heightens the joy of having read this absolutely epic magnum opus. Jordanna picks up an off-beat little known account of a meeting between the Inuits and the first expedition from the Vikings land and then spins that off into a highly engaging, magical and sprawling epic full of timeless mythologies and peerless magic, building it up as a historical fiction that soars. In terms of the originality and the stunning language, The Wolf in the Whale stands way above many other books that I have read, in the recent past. 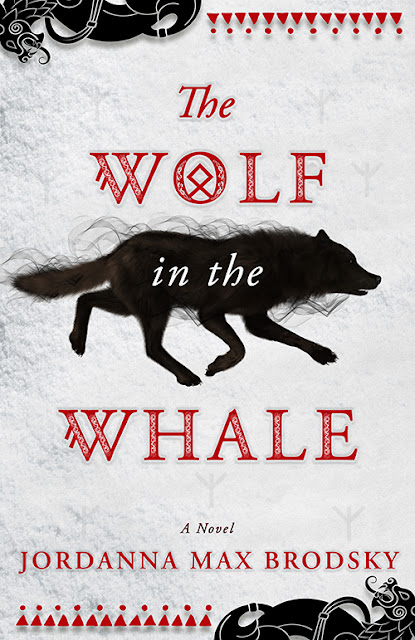 It is the story of the coming of age of Omat - a fearless Inuit hunter and shaman living on the edge of the world, living off the frozen nature and the bounties that the Ancient Spirits like Sea, Wind, Moon,Sun and the Animal spirits like the Wolf or the Whale, allow the ice-dwellers to hunt down. Omat's tribe is small - most of the able young hunters having died in a tragic accident, it is left to the wits of Omat's grandfather and her brother Klassik's fierce spirit along with Omat, to fend for the small tribe. Now Omat is special. In that Omat is born a girl but with a man's spirit inside her[ That of her father ] and is protected by the Great Wolf who watches out for her! And while it is traditionally frowned down upon for a woman to wield a hunting weapon like harpoon, Omat's grandfather a shaman himself, has convened with the spirits and deems it right that Omat be brought up like a boy. befitting the great warrior that her father was.

The appearance of a new tribe or family even as the winter is getting worse and hunt scarce, sets hope soaring among Omat's family. But things go downhill from there as the newcomers disrupt the Omat's peaceful have; Omat's grandfather dies suspiciously after a seal-hunt and they decide to strike out on their own with Omat claimed as prize by Issuk, the leader of this small tribe. But struggling to live and reconcile to her role as a "woman" in that tribe, deflecting off the jealousy and hurt that her milk-brother Klassik now probably cares more, for Issuk's second wife, Omat is reduced to a mere shadow of her older self. But then again, the Gods are cruel and temperamental. Stripping away her magic as a shaman who has the ability to summon animal spirits and take on their shapes as well, the jealous Gods of this old world make Omat's life a living hell. Indeed, Omat's troubles are only beginning as Omat finds out shortly - when a ship of Vikings lands up near the frozen shores. This encounter soon turns bloody and shifts the trajectory of her life forever.

The long struggles in the deep wilderness of the Arctic frozen lands plays out cinematically in the backdrop of fevered dreams, magical possessions and cold-hearted violence. Omat's constant struggle about her identity in this world - as a man trapped in a woman's body - is the anchor-point of a spellbinding narrative woven by the author. Jordanna brilliantly juggles this question about gender based identity that has seeped through cultures, even one as remote as the Inuik at the turn of the first millennium, walled off from the rest of the world in their arctic wilderness. A culture still bound by rules set in place by men where stories are grim and horrific about rape and the powerlessness of womenfolk. Despite the flighty adventures that Omat and her loved ones go through, which make us flip the pages faster as one danger after the other mounts up, there are several hard questions that Jordanna raises deftly enough to rattle your mind.

There is a timeless romance in the book - and surprisingly enough, one that builds up only in the second half. But Omat and Brandr's tender love story that brings in a lot of balance and perspective and resolve into Omat's broken life, is beautifully rendered. It's a story of an unlikely bond and friendship between strangers from two completely different cultures and it unravels beautifully. Brandr forces Omat to examine herself deeply - the story of her transformation from an arrogant shaman who truly believed in her man-hood into a humble and practical survivor who understood the roles and skills of a woman in such lands.

This review is incomplete without the mention of a couple of things. The harshness of life in such frozen tundras of the world is incomprehensible but Jordanna does a fine job in introducing the readers to this obscure culture and a unique way of living. Like the whole spectacle of hunting a whale becomes a compelling exercise. Similarly, the whole melting pot of mythologies and stories that make up the Inuit culture is brought to fore in fascinating detail, effortlessly tied into the storytelling. The magic is almost real, as you soar above the winds, to meet the Moon or go running the wilds, next to the Singarti, the Great Wolf spirit. And also, last but not the least Omat’s family in the wild – the pack of wolf-dogs are the most amazing thing in this whole story.

This amazing book is possibly one of the best novels in 2019 and I don’t say that lightly. Omat’s transformative journey will captivate historical and fantasy readers alike as Jordanna brings alive an enchanting chapter in our history that is relatively obscure and then sprinkles in myth and magic to make that story sparkle.
2019 Books Book Review Epic Fantasy Jordanna Max Brodsky