April 11, 2019
I have not been enchanted and bewitched by a book like Black Leopard, Red Wolf , in recent times. Period.

I don't know what Marlon James was smoking as he wrote this opening chapter to the proposed Dark Star trilogy but this one's a psychedelic experience, a dazzling journey through magical lands teeming with danger and explosive violence, land that is brimming with elements from Marlon James' frenzied hyperactive imagination, and resembles a fantasy version of pre-colonial Africa. But it's a journey that will horrify you and amaze you in equal measure - for the man doesn't shy away from violence or skin-crawling descriptions of sex. Cinematic violence on a scale and form un-imagined before. [ think hatchets flying through the air, arrows bursting through from the back, hearts ripped out and eyeballs plucked dry and scores of bodies mutilated and hacked down, at random or on purpose. And it doesn't stop here!] 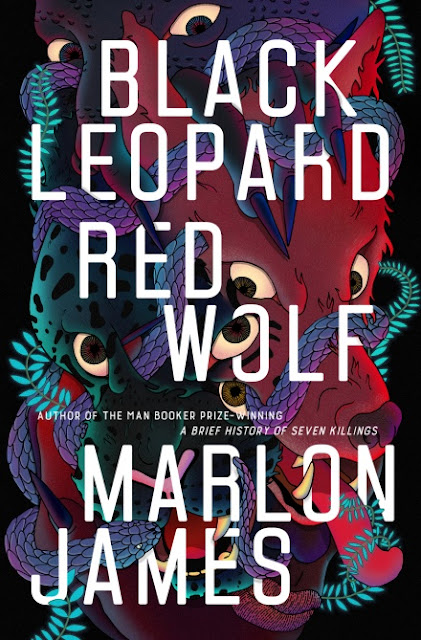 This is an Africa you haven't even dreamed of. An Africa of malicious witches who would sell babies in the market, or shape-shifting animals in love, of water witches who can bloom out of the floor, of demons who walk on the roof, of evil magicians who clap thunder and lightning with their wings, fueled by the still-beating hearts of the innocent, of Kings and Queens conspiring against each other, of slaves entombed in the walls of a tree-cities. And it just gets weirder and oh so beautiful.

It's a very ribald and bold take on a lot of the myths, we have only fleetingly heard about. And yes, if you haven't read History of Seven Killings, Marlon James' style takes some getting used to. It's meandering and it is peppered with dialogues that ramble on and on: The magical world comes alive in James' rich language but it is also so opaque that it takes a double-take on your part as a reader to fully sink into that dense rich phantasmagoria.

There is no plot, per se to speak much about. Yes, it is a quest. A quest to find a lost boy whose significance is slowly revealed like heavy layers peeling off - but right off the bat, the narrator who is only known as The Tracker declares that the child is dead. Now is that a misdirection? We don't know that - but this tale of finding the lost boy is only the main clothesline on which hang a hundred or more stories built around this adventure. Each one colorful, dangerous and absolutely bonkers than the last. And yes it has been said, that the Tracker has a nose. And he also has a mouth - for it tends to carry on. In true picaresque form, the stories take on life, bringing up different aspects of the  mysterious Tracker and his background.

Joining him in this quest are a motley bunch of crew - including a shape-shifting gay leopard who has looked out for the Tracker from when he was young, an Ogo (Ogre?) called Sadogo with a childlike demeanor towards life, a handsome army prefect whose skin is lighter than most ( and is thus, an aberration in these lands!), a water witch whose loyalties and intentions are always suspect and a whole host of other amazing characters. I have a few favorites among this lot: There's a buffalo, considerably more dangerous than even a lion whose sense of humor is excellent. And then there's Mossi, the prefect with a flair for words and action who may perhaps be the most un-affected by the cruelties of life or at least, one who comes across as the least melancholic of the lot. But the coterie have no love for each other - loyalties and truth are both sliding slithering things in this world.

The Tracker is an amazing protagonist. A young man whose anchor in life had been ripped away when he was just a youth, he's an intense study in bereavement and grief. Of a broken childhood that haunts him throughout. He resents his abusive father and loathes his mother and moves out of his river village called 'Ku' trying to distance himself from this legacy. In fact, he makes it a point to rescue these children ( born with defects and thus, rejected by society at large, a trait that he perhaps identifies with most ) and also becomes an adoptive parent to this set. He is not against violence but he takes himself out of that cycle of revenge between his family and the neighboring river village called Gangatom who are rumored to have killed his father and brother.

But this whole trauma that shapes his life, is hidden under layers of wondrous adventures that the Tracker goes after - 'tracking' the untraceable. Like husbands who have been dead a few years or children missing for days. [ In fact, one of the first chapters details Tracker's early quests that leads him into a fantasy underworld beneath a river tracing a husband, who wishes to remain 'dead' and his amazingly choreographed action scenes with the blood-thirsty demons called Omaluzu. This kind of set the tone of the book for me. I couldn't let go after this.] Indeed, like some of the best "superhero" movies what propels the narrative forwards, is the origin story of the enigmatic Tracker. His beginnings are the key to some of the questions posed in the narrative and also the end - as we read about his coming of age, the strange rights of passage among the bushes and by the river-side.

This book is the start to the Dark Star trilogy and there's no other way to say this than saying that it's a tough one. But it's a soaring flight into a 'Dark Continent' that we could never have imagined. Gloriously imaginative in its fine-grain detail. It's lush and epic and it's got so many layers to it. James' wondrous language keeps us at it, trying to peel those off trying to get to the bottom of the mystery of this missing boy and there are countless mysteries laid bare in that process, without we even realising this. It's a satisfying read because it's a tough one and you will have to plow through strange lands, one after the other. With the next proposed book, Moon Witch, Night Devil - James has promised us that it is going to be a Rashomon-istic experience. The same journey from another perspective. I wonder whose head are we going to get into next. I get the jitters just thinking about it. I cannot wait: In the Tracker ( oh by the, he is also the Wolf. A enthralling story that!) and the Leopard, epic fantasy gets two of it's finest. And if Marlon James continues on with his renegade ways of mixing up myth, imagination and fantasy in that head of his, I have no doubt - this trilogy will rank among the finest in the genre.