February 20, 2019
Something about that haunting title, that draws you in. Don't judge a book by its cover but how about it's title then? Well, if this book were to be judged on that dimension, then it comes across every bit as intriguing and engaging as that evocative title. Danielle Cain's first outing is a high energy, razor-sharp no-nonsense post-anarchist surreal novella that is soaring high on ideals and posing uncomfortable questions. 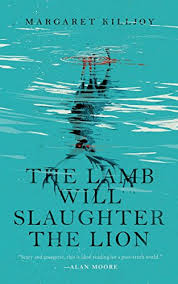 Danielle is a traveller, in the truest sense of that word. A nomad who hitchhikes her way through decrepit American heartlands. She is making her way to this place, off the grid and google maps - called Freedom, Iowa that her best friend claimed, is the ideal hipster nomad paradise: As the name suggests, a place free of the yoke of any authorities or rules, governed simply by the good will of its free-hearted citizens. But as Danielle enters the town, she is greeted by this unreal red demoniacal deer with three antlers, whom the townsfolk refer to as Uliksi - an otherworldly spirit summoned to kill the "predators" in town.

Things turn on its head as Danielle realizes the term "predator" is a loosely used one. The line blurs between the prey and the predator as Uliksi turns on one it's summoners, named Anchor. It's a mad frantic rush by Danielle and her friends to understand this puzzle even as the utopian community develops cracks and schisms right down the middle, about the issue of Uliksi. Should they let Uliksi remain in this realm to eradicate the ones who might disabuse the notion of power or should they banish the spirit, before the demon barrels through that non-existent differentiation between the powerless and the powerful, or the tyrants and the oppressed.

It's a blistering fast read - peppered with bold narratives that touches across sexuality, post-anarchistic politics and lots more. It's a disturbing premise but Margaret, herself a anarchist whose love for the roads knows no bounds, brings alive this marginalized community in crackling detail and vivid colors. It's perhaps a shocking twist to the suburban fantasy settings but I totally loved the manner in which she pulls the ideas off. The manifestation of ideas - as a demon out to suppress the evil in us is absolutely brilliant. Danielle, a self assured young woman in search of answers is our anchor to the story as it unfolds crazily - is every bit as likeable as our heroine. It's a piece of shining punk jewelry sitting pretty atop the urban-fantasy pile, shocking, original and highly thought-provoking.
2017 Books Book Review novella tor.com Urban Fantasy