February 06, 2019
Ben Galley came into my notice a few years back when I got this book on improving my craft, called Shelf Help I had also bought the first two books of his series, the scarlet star trilogy (Bloodrush) but never got around to reading him. And then, two weeks back, his tweets on Grim Solace, the new book in this series stormed the twitter world and I felt I had to check this one out. Grim, dark and a world-building that reminds you of Michael Moorcock's Elric series, hell count me in!

Chasing Graves, the first of a trilogy is set in the fascinating city of Araxes, the capital of the rift-laden Arctian empire. Also known as the City of Countless Souls where your status and richness is measured in terms of the 'shades' you own and not just the weight of silver. In Ben's beautiful prose, this bustling metropolis comes alive - beset on one side by a brutal desert, bordered by poor slum-regions known as the outsprawls which slowly lead into the city through the countless markets that sell spices and auction slaves and shades alike, expanding to give away to towering spires and pyramids circling around the tallest of them all, the Emperor's palace aptly named as the 'Cloudpiercer'. 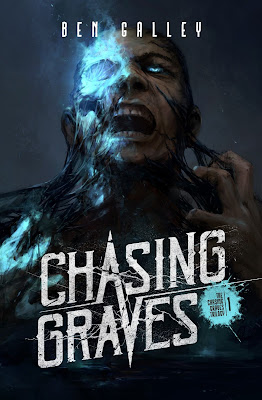 Into this sprawling metropolis comes Caltro Basalt,  new to this strange city of Araxes, who also happens to be one of the finest locksmiths in the whole empire. Now Caltro is a selfish bastard and is only here for his personal gains, drawn in by the promises of riches acting on the summons of a mysterious Lord, from within the capital. But Araxes is not the safest of the places in the world - as the act of "soul-stealing" is rampant and the cost of life itself is cheap here in the narrow dark alleyways. To his dismay, poor Caltro realizes this a tad bit late and he gets killed right on his first night in Araxes. But as the saying goes, getting killed is only the beginning of the troubles for you in this city. Caltro becomes an "indentured" soul - a shade, who is bound to his master who holds the coins that originally paid for his passage to the realm of souls, through river Nyx. [ Oh it's a fascinating account of how this practice came into being, Ben's expansive and rich story-telling skills coming to fore, bringing the myths and the associated horrors alive indeed!] Sold to a grumpy old widow, who wouldn't care less for the fact that the dead Caltro or Jerub as he is now known, is still a damn fine lock-pick, sadly a much less useful house-shade.

Murderous merchants who trade in souls without any qualms, rule the night. One such is Boss Temsa, whose ambitions run wide and far and is plotting devious ways to grab "power" in this quirky capital city.  Temsa's power-mongering ruffles quite a few noble feathers, including the empress-in-waiting Sisine, who is playing at her own machinations to oust her father the Emperor, locked up within his own chambers for a long time now, for fear of getting assassinated. Into this mix, comes in Nilith - an arctian woman dragging her husband's dead body through the raging desert in an effort to 'indenture' his soul in the waters of Grand Nyx, deep inside the capital city of Araxes.

As far as structure goes, the above four characters are the main POV's propelling this twisty narrative forwards. Rather than an action-thriller, the plot unspools as a politically charged drama, with the clever play-offs between the chief characters. Who has called in for the services of Caltro into the capital? Will Temsa succeed in his audacious empire-conquering plans ever? Will Sisine take over the reins of the Empire? And what of the mysterious Nilith, dragging her burden through sand-storms and braving bandits on the way? What is her play in all this?

The many twists and turns in the story keeps you invested and the world-building is absolutely fantastic. The Egyptian and Arabic influences on the world and the history is telling. And Ben Galley's prose flows smoother than the grand Nyx to keep us readers, panting for more. And indeed Ben, in his trademark style seems to have almost wrapped up the trilogy (Grim Solace, #2 in the series! released last week and I can't wait to get started on that!) My only complaint about the book, will be the 'soft' climax evidently hooking us into Book#2 with one humdinger of a plot-twist. While there are moving parts to the plot throughout, the sense of urgency of building these neat little twists into something catastrophic, I felt was missing, not that it interfered with my enjoyment of the overall book at all.

Still, is that good enough for me to be invested in this series?

The answer is going to be a resounding yes. I will start on Grim Solace soon enough. Meanwhile, if you need your dose of dark grim adventure, liberally hosed down with the self-deprecating humour of a likeable-down-on-his-luck protagonist, also featuring some colossally good world building, give Chasing Graves a try. Totally worth your time and attention.
2018 Books Ben Galley Book Review GrimDark