January 26, 2019
Koode is a special movie, in more ways than one. It came into the headlines for two big reasons: It marked the comeback of two of the most loved Malayalam cinema personalities on this one project; Nazriya Nazim was doing a big-screen comeback after a long while and Anjali Menon helming the movie was doing her first movie, after Bangalore Days. It also had Raghu Dixit doing the music for a mallu movie for the first time. 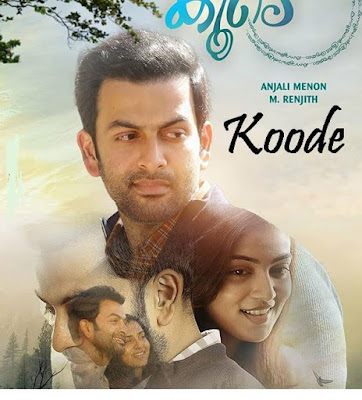 With that weight of hefty expectations dragging it down, I really was a bit skeptical about the movie. But I needn't have worried. Koode soars high, just like the dreams of the protagonists of this movie. This is a story about a disjoint family trying to find their broken rhythm in life after their darling daughter dies at a very young age of twenty, due to a congenital breathing disorder. Koode, means 'Together' in Malayalam and that is the underlying theme of the whole movie - as Prithviraj's character Joshua nursing bone-deep bitterness about how he's been denied a family his entire life, as he had to leave his own ( including a squalling infant baby sister ) to work in the middle-east to make the ends barely meet.  We first meet Joshua as an immigrant worker in the middle-east, working in claustrophobic conditions inside an oil-rig who has been called back home after a long gap of four years on an emergency ( This is a theme close to Anjali's own heart as she probably harbours something similar from her own personal life) His dead-pan expressions after having hung up the long-distance call is what first intrigues us, about this character. Is he not happy to be going back home? Was that an emergency call? Why is he not worried?

Koode is elevated from being just another ordinary movie because of the heart-wrenching performances. Specifically Prithviraj whose maturity as an 'actor' now has been steadily improving year on year. His eyes reflect the hurt and resentment meted out to him by his own family, someone who loves inclusion and being 'together' with his family as a growing up kid [ there's this scene where he calls his own football coach from school to celebrate Christmas at his own home, as the coach doesn't have anyone with whom to spend his Christmas vacations. It sets the tone for the kind of person that Joshua is, deep in his heart.] And yet when we meet him in the beginning of the movie, he is a man with dead expressions and buried emotions. Who doesn't even shed a tear at the burial ceremony that he's called back for. There's director Ranjith who plays his dad, his reluctance at having to let his young son become the martyr for his family is well conveyed through small acts. Then there's Nazriya. Jenny's character is played by the over exuberant Nazriya. Who is her usual bubbly self and only pauses in between this manic high-energy act, to take long wistful looks at her parents. Her pixie act is the much needed levity that the movie needs, to brush off that heavy carpet of gloom that seems to weigh it down right from that first shot. Then there's Sophie, played by super talented Parvathy in sparkling form as usual, hurting from an abusive marriage and who now resents human touch.

But my favourite character? It has to be the adorable retriever dog named Brownie. He's a star. 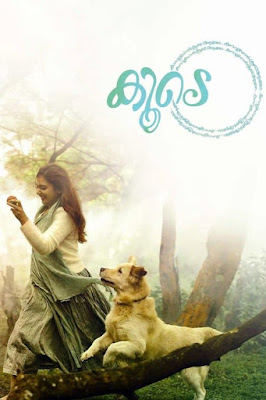 Anjali's exquisite touch that made movies like Ustaad Hotel and Bangalore Days such amazing movies is also evident here; in those little things that make Koode shine, dusting off the cobwebs of plot cliches. Like the warm tones of the cinematography, shot in earthy brown in the present timelines and cool blues of the past. The colours of Joshua's sweaters change from drab to red as his character itself slowly undergoes a change of heart. In the subtle touches - Like Jenny's room is as bright as her infectious personality with pictures of flying, that her soul always desired. But then again, there were a few narratives that probably dragged the sublime feel of the movie a bit down. Nazriya's college days, a light-hearted romantic angle with the college musician (Roshan Mathews), a strong nod to claustrophobic patriarchy that runs in Sophie's family with subtle signs of abuse, even in her own family.

A word about the music - fantastic! Kudos to Raghu Dixit for his experimentations which ring very apt. The Minaminni and Vaanaville by M Jayachandran are lovely songs. So is the up-tempo rock fusion version of Paranne.

But the mark of a genius, is in having transported the audience along with the journey of the protagonists at the end of that 2 hours. And in that, Anjali Menon is a past master. We've seen the character evolution of Faizy (Dulquer Salman) in Ustaad Hotel, of how pretty much all the leads of Bangalore Days find their groove by the end of this movie. Joshua is a man who finally finds his flock, returns back to the nest from which he was flung out long ago. This is what Koode ultimately is about. A beautiful movie about broken relationships and unfulfilled dreams, about the words left unspoken, the promises yet to be delivered on. And a man's journey back home, about finding himself amidst the terrifying landscape of loneliness and hazy memories. More power to you, Anjali.
2018 Movies Anjali Menon malayalam