December 26, 2018
Trail of lightning will possibly be among my top five books of the year. Period.

Navajo legends, mythical monsters, Gods and wicked men - all of this comes to life in Rebecca Roanhorse's urban fantasy debut that will rock the socks off you, by the time you are even half-way through. For me, the experience was a double joy as this was my first audible title and the breathtaking Sixth World, ravaged by the apocalyptic floods known as the Big Water in the near future, is so wonderfully depicted by Rebecca's sprightly writing and brought to life by narrator, Tanis Paranteau's amazing rendition. Set in a completely immersive native world that begs for more exploration, headlined by a native young woman as the kickass protagonist and written by Rebecca, who herself is from the Navajo area in the US. Refreshingly original, did you say? Oh yes. 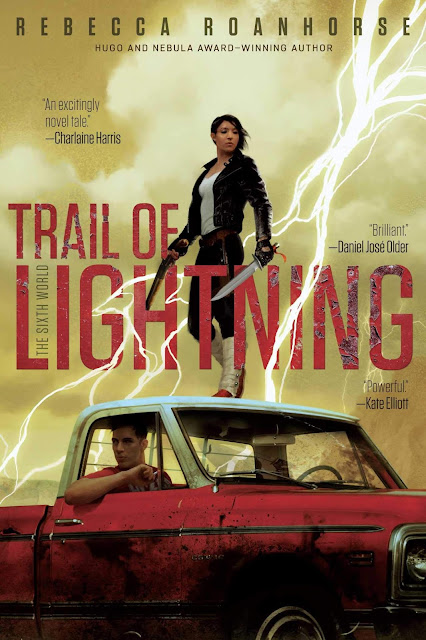 Dinetah is a Navajo region surrounded by vast magical walls cut off from the rest of the world (that has seen massive economic, environmental and political upheaval following the Big Water) and is now populated by not just the Dine', the indigenous folks of Navajo but also legends and Gods come alive. Clusters of humanity live on doggedly in cities and villages - but they are frequently ravaged by the monsters, who too have come alive, after the Big Water incident.

That brings us to the monster slayer Maggie Hoskie - a headstrong orphan extraordinaire who has experienced her clan-power awakening after a terrible tragedy visits her only family in the world, her grandmother when she is hardly a teenager and is taken under the protective wing of the legendary  monster-slayer the immortal Naayééʼ Neizghání. Her clan powers are blinding fast reflexes and killer ('straight arrow') instincts which needs to be tempered and honed so to keep her out of trouble. But she grows up in a world that's gone crazy - what with immortals and Navajo Gods awakened and walking the ravaged earth in real flesh and blood, frequently visiting mortal dreams, shaping and meddling with their desires and in general, wrecking disaster by their wicked, vested interests, not caring much for the paltry human lives spent as collateral damage, water under the bridge ( pun intended) so to say. And so wherever she goes, trouble follows.

We meet her at a time when she's just coming out of a self-imposed exile of close to a year, after her mentor Naayee has disappeared leaving her alone. She takes on an assignment to bring back a girl kidnapped by a monster in the locality - only to encounter something that she's not bargained for. A new breed of monster that seems to have been 'engineered' by bad medicine (healing magic for the indigenous) - To dig into this mystery, she teams up with Kai Arviso, the grandson of the only medicine man Maggie knows and considers, almost family. Kai comes with his own set of secrets but his move-star good looks and genuinely charming mannerisms wins Maggie over - after she realizes he makes for an able partner in this quest. The deeper they dig, they realize the conspiracies have grown roots deeper than they could have imagined. There are trickster Gods, there are trickier immortals and there are just wicked bad men - all entangled up in this. And to get out, Maggie will have to do a greater sacrifice than she had bargained for.

Rebecca builds up and paces her story so beautifully. I went in without knowing anything about the native mythologies or the concept of Dine' - but Rebecca builds her world effortlessly without dumping us with too information. First person narrative through Maggie helps with the same - as Maggie's lens is that of a native, who's witnessed the terrible changes in the world after the Big Water and has had enough share of her run-ins with the gods and monsters. The plotting is slick, action tumbling through page after page, with cliff-hanger chapter endings that hook you in as the pages fly.

Maggie and Kai are the chief two characters in the story - and Maggie definitely has become one of my all-time favorite urban fantasy protagonist. She's fiercely independent, a tour-de-force to contend with physically because of her 'assassin' prowess and her natural inclination for killing. But she's also mentally very vulnerable - having suffered too many losses in her short life. Which also makes her  socially awkward but this wins points for her with the new friends she makes through the book. She goes through life stoically accepting what cards she's been dealt and makes the best of it. Grounding her certainty in the fact that hurts will remain, the scabs are temporary but you just got to deal with it. [ And trust me, there are quite a few horrific incidents that scar her young life detailed out in the book!] Kai, on the other hand - plays it much cooler. preferring to mask over his hurts with his quick-silver tongue. An aura of mystery hangs around his characterization; We realize it is so, by design as we dig into it by the climax and it also leads for newer mysteries to abound in the next book.  There are quite a few side-characters like Nayee' and the Coyote, a trickster God equivalent to Loki in the Indian legends who add the sizzle to this steak and keep the overall narrative interesting and always at flash-point.

The settings are gorgeously realized. Rebecca true to her promise, paints out an intriguing and compelling new world set within the walls of Dinetah. The focus of the story never wavers, from solving that mystery of this new-breed of monsters and the investigation takes our protagonists deeper into a mesh of trouble, lifting the story-line to wholly un-imagined levels of awesomeness.
Storm of Locusts comes out April next year.

If you are looking for entertainment, headlong action and adventure set in a wonderfully realized original world - with non-white non-male leads who can kick ass, just as much or even better, then Sixth World is a series you should be gobbling up. Trail of Lightning is a precursor to the awesomeness that await.
2018 Books Best of 2018 rebecca roanhorse Urban Fantasy