Spiderman : Into the Spiderverse ( Movie Review )

December 17, 2018
Watching the new Spiderman movie was an impulse decision but what turned out to be the best decision of last weekend. I went into the movie kind of unprepared for the awesomeness that unfolded; Weary with the multitudes of "spidermen" who plagued the big screen over the last few years, the last thing we wanted was another one, right? But this animated version shrugs off the incompetence of the live-action version, lustily embracing the entire wackiness of the marvel universe, in its lingering multi-form focusing on not just one, but five different spider-man origin stories. And we are left imagining, why didn't they do a big screen comic adaptation of the source material, given animation is perhaps the best possible form of adaptation. And this isn't your Sunday morning TV screen washed out grey version - but a full blown highly stylised gorgeously realised alternate universe, come to life with attention to detail that brings alive the crazy sense of wonder and danger lurking in corners of Brooklyn like you've never seen before.

Okay - so for one last time, here we go.

The main story-line focuses on Miles Morales (voiced by Shameik Moore) origin story - half Afro-american, half-Latino, Miles is another outcast trying to fit into his new posh school. He's smart, intuitive and relates to people well, genuinely caring for them. But despite all that, his interests are bordering on rebel-spirit taking a special affinity for his uncle Aaron who encourages his hobbies of art - spray-painting to bring alive abandoned building walls with fantastic murals. Miles has the typical teenager mood-swing love-hate relationship with his over-protective cop father. [ The father-son banter is laugh-out-loud funny and also emotionally overwhelming at times ] and is also the gawky teenager trying to befriend the only girl who laughs at his nerdy jokes in school. 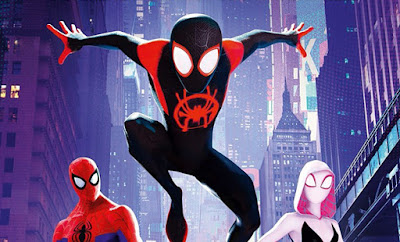 All this however takes a backseat, when one day he gets bitten by a radio-active spider, infusing him with "spidey" powers and the real spiderman, Peter Parker takes him under his wing to teach him. Their lessons however take a backseat when Kingpin ( Yup! big boss of the streets of Hell's Kitchen/ Brooklyn here is the big bad wolf - however, his actions are all underpinned by his longing and loss of his wife and son and he holds Parker responsible for their deaths.) rips into the time-space continuum opening portals into other universes all around, in an attempt to bring back his loved ones. In the melee that follows, we get not just two spidermen but a total of five fabulous versions - drifting in from different universes - Peter Parker himself, an older version ( Jack Johnson ) who's slunk into depression and even let himself go, developing a paunch. Then there's Gwen , the spider-girl version. The noir version, a detective spiderman from the world-war era ( Nicolas Cage!!) - and the weirder Penny Parker from the future with her pet robot and Peter Porker, the piggy version of a spider-man from the cartoon-verse. In any other format, this crazy coming together of superheroes would have fallen flat but in this slick animation movie, this is brought forth very cleverly with quick montages explaining their own origins story. Kudos to the directors.

The tone as would be evident, is firmly tongue-in-cheek [ cheek hurting with all those funny gags !] and irreverent, as would justify the comic books but the message goes beyond the animated Ka-Pows and thought-circles in a very strong and engaging manner. A flash-bang on time-space continuum has never looked so good on screen. And yet with all the universe-gone-absolutely-bonkers theme that sucks all of us in, we are never far away - from that light at the end of the tunnel. Shining bright with all the heart and good intentions of our hero, Miles. He's the core of the movie - highly energetic, artistic, smart, just brilliant in every which way. His learning curve to become the superhero is steep - but as they say, it's a leap of faith. And Miles makes that cross-over in absolute style. Leaping off tall buildings to a scintillating sound-track of funky upbeat hip-hop and soulful feel-good superhero music [Seriously this is easily one of the best soundtracks I've heard, boasting some of the biggest names today on that label - Just deliriously good earworm. Do yourself a favor and listen up.]

So apparently, Into The Spiderverse has got a trilogy set up now, greenlit and we think it's brilliant news, can't wait! This one's an animation masterpiece that is worth it's hype on the big screen, one of the best stories about our friendly neighborhood Spiderman brought out by Marvel.
Clearly, anyone can wear that mask. and sparkle!