December 17, 2018
Godblind is Anna Stephen's spell-binding debut that captured the fantasy world's imagination over - her unflinching story is splotched dark and grim with blood, unapologetically pitching her as one those worthy successors to Joe Abercrombie and Mark Lawrence. 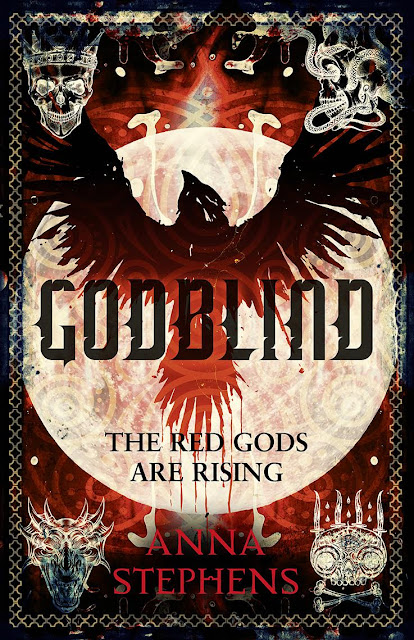 I didn't get to read this one last year and am kicking myself for the miss. Anna is one of the top notch talents who burst onto the fantasy grim-dark scene last year - along with the likes of Anna Smith Spark and Ed McDonald ( Incidentally both of whose second books are excellent fare establishing them as major forces to be reckoned with!) So when Darksoul came out this year, I knew I had to go back and read her debut and catch up, with this rising tide of red.

The Red Gods are coming back and their thirst for blood is unquenchable. Exiled a millennia ago and
plotting their return, the blood-thirsty Gods ( Dark Lady and her brother, the God of Pain) are worshiped by the tribe/kingdom in the west known as Mireces who are planning to lead an all-out assault down into the kingdom of Rilpor - a moderately well-off kingdom where the folks worship kinder Gods, the Gods of Light (Dancer and her son, the Trickster God Fox)

But trouble's brewing up on the borders - on the west where the Mireces have always been hounding the Rilporians. The story starts with a sacrifice by the faithful to the Red Gods but one of the slaves, Rillirin decides to retaliate against her fate. By killing the king of Mireces and escaping across the borders, right into Rilpor. Now the west edge of the kingdom is patrolled by a fighting set of villagers, known far and wide as Wolves along with the "West Rank", the empire's fighting unit. And among the Wolves there is one by the name of Dom Templeson - a seer who frequently gets sent "visions" by the Dance about the future. He thus foresees this terrifying reality of this all-out assault that will destroy their hometown called Watchtown and also, lead to the crumbling of the Rilporian Kingdom eventually. He takes in Rillirin arguing that maybe she holds the key to the tactics of the savage bloodthirsty Mireces. The Wolves prepare for an eventuality - believing in their "calestar" little knowing that Dom himself harbours dark secrets that may turn the tide of war.

Deep in the heart of the kingdom, the present king, Rastoth the Kind has slowly been succumbing to old age and sorrow at losing his wife, a year earlier ( murdered inside the castle and the murderers still unknown and at large, much to the chagrin of their commander of ranks, General Durdil Karkoram) - and his name is slowly being dubbed as Rastoth the Mad. The castle is crackling with secrets and treachery with political intrigue ripe to burst into something nastier and dangerous. The two sons, Janice the heir and Rivil are both devastated by this turn of affairs and want to help in their own ways. To show their solidarity to the larger kingdom, they embark on a journey to inspect the border security on the west - which is where disaster strikes and one of the first massive twists in the plots manifests.

The other big POV is Captain Crys Tailorson, an ordinary soldier whose good intentions keep getting him into trouble and getting demoted, who hasn't yet found his "calling' - His strange dual-coloured eyes make him the butt of all jokes, getting compared to Fox, the trickster God. Crys however, gets pulled right into the thick of this boiling cauldron of backstabbing and trickery when he's assigned to lead the Palace Guard for the heirs and accompanies them to the west, where things go horribly off-plan.

There is a lot of ground covered here - the pacing deft and the plotting compelling enough with just a lot of wheels in motion. The POV's are spread out across some ten characters. But my personal favourite bits were the ones inside the walls of the castle - Full of dread and intrigue and politicking, with Durdil and Rivil and the others, just that menacing sense of something sinister lurking in the dark was extremely well done. Though short, Durdil's chapters were an absolute delight for me as he seeks to keep his king alive and the kingdom from getting breached, working wits against the enemies and then later is forced to get out there, right into the thick of the war-zone.

Rillirin and Dom are clearly set out for being the central protagonists - in this tale of faith gone ugly caught right in the middle of the battle as the Mireces advance into the kingdom destroying everything in sight. Blood, gore and fire, their promise to their bloodthirsty Gods who can't wait to breach that Veil set in place years ago. But I wasn't so enthused by both their characterisation, their tepid love-story notwithstanding.

Crys, however is elbows deep in blood, gore and much more ( literally!) finding himself in the middle of such violent situations that it's a wonder that he is alive, at all. But true to his nickname, Trickster - he manages to stay afloat( snigger!) and fight his way out of the sticky red situations. His chapters were indeed a total hoot. Anna Stephens definitely knows how to write a cliffhanger - almost GRRM' esque flair to keep us hooked on and then invested deeper making us care for this motley bunch of unfortunates. A word for the elderly matron, Gilda - who's the priestess of the Light, assigned to bless and guide the Wolves and the "good guys". I LOVED her balls. Her cheeky, gutsy nature am sure, has won hearts all over. Want to see more of her in the books, two and three!

It's literally like wading through a river of red - and totally grim-dark situations, but never does the situations feel overwhelmingly gratuitous. Be warned there are some absolutely heavy scenes in there but I did move on, just caught up with the furious turn of events that unfold. The characters bring heart - are indeed, in the grace of Her light - making us care for the ones who die and be on tenterhooks about the inescapably hairy balls-to-the-walls situations the ones who are left alive, find themselves in. There is still fight left - the devices of the Gods still unknown.

I have already started reading the sequel - that promises even higher tides of red what, with the Red Gods almost having stepped into the mortal world through the tatters of the Veil. Godblind is everything it promises to be in terms of the 'grimdark' tag. Utterly consuming in it's devotion to the path of blood and sacrifices and compelling darkness, Anna Stephen's debut is a gut-punch to the fantasy world, firmly establishes herself as the one to watch out for.

My feet are on the path, folks. You would do well, to fall in as well. Onwards, to dark souls and sacrifices.
2017 Books Anna Stephens Best of 2017 debut Epic Fantasy GrimDark