December 08, 2018
Tasha Suri’s debut, Empire of Sand ( Book of Ambha # 1) has been on my eagerly anticipated 2018 fantasy novels for a while now. The lush, south-asian mythology inspired fantasy book is said to have been born out of Tasha’s obsession with the Mughal Empire in India and colored by her unabashed love for Bollywood. So obviously since I share both these unhealthy 'obsessions' with her, I was extremely interested in how the fantasy version of such will turn out in paper. 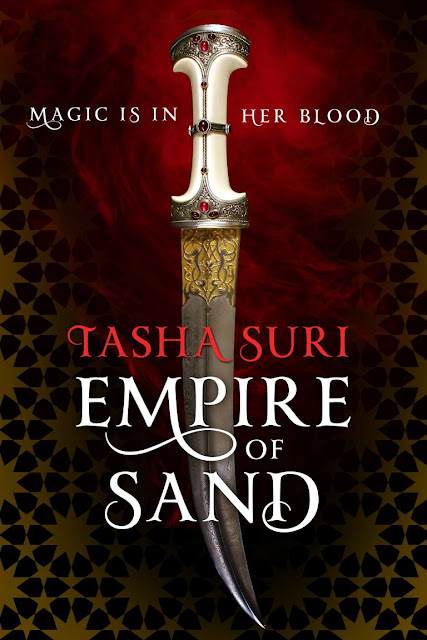 An accomplished debut, Empire of Sand is a book about complex relationships and the interplay of power. Deep in its heart, it is a story of choices and compromise. It is the story of young Mehr, a girl who is caught between the two cultures that have shaped her life and how both come to a cataclysmic clash threatening the world itself, riding on the vested interests of people in power - abusing this notion to their own gains. Mind you, Mehr is not your 'regular' tough-as-nails ass-kicking fantasy heroine. What she is, is a strong willed compassionate and kind woman who understands the knife-edge that she has to traverse, to keep her world alive despite the angry gods and megalomaniacal mystics trying their best to destroy her world.

So Mehr is born of an Ambhan noble and an Amrithi lady - the tribe of Amrithi has long been persecuted by the nobility within the Empire because of their magical abilities. And so after Mehr's sister is born, their mother chooses to walk out of the wed-lock, to go back to the ways of the desert that are precious to the Amrithi. Mehr and Arwa, her younger sister grow up with their step-mother on the borders of the desert under the protective seal of their father, who is also the governor of the district.
After several years, just as a desert storm looms over this border city of Jah Irinah, Mehr and Arwa encounter a Daiva - divine creatures who according to the myths, are the children of Gods. Mehr, who carries her mother's lineage and thus the magic, can pacify the Daivas with a drop of her blood keeping them at bay but with the intense storm coming in, her urges to perform the rites of magic, a dance form scared to the Amrithi taught long ago by her mother ( and later on tutored by another Amrithi woman, Lalita who becomes her friend and confidante in the town) comes on pretty strong. Even as she prepares for this rite, those faithful to the Emperor have chosen to lash out against the mysterious Amrithis all across the Empire, especially in the district of Jah Irinah. Lalita flees the city even as the empire's faithful kill her friend and bodyguard, Usha - and Mehr is completely helpless in the face of such brutal atrocities.

Her father, the Governor is also feeling the heat and knows that in order to protect his daughters, Mehr and Arwa, he would have to send them away. But even as he is undecided, he gets a proposal of marriage for Mehr - from a mysterious sect of people known only as the Mystics. A group of men and women faithful to the immortal being known as Maha, who was the founder of this empire, centuries past. Mehr has no choice but to acquiesce and get married to this stranger, Amun and travel to the heart of the desert to the temple of Maha. Her life turns upside down as she learns the truth about her 'husband' and also the mysterious immortal known as the Maha. How she copes up - trying to balance the act between staying true to her own Amrithi's ways and survive inside Maha's temple teeming with dangers unknown even as the next big storms lash the world - forms the rest of the narrative.

Tasha’s writing is exemplary and it draws you in, immersing you into this beautiful world – be it the desert culture of the Amrithis or the Mughal-inspired nobility of Ambha. The settings are vivid and come to life, drowning you deep into the story. The concept of magic embedded in dance is pretty original and one of the strongest allure of this story as well, keeping the events all centred around this act. The first act of the story is a strong introduction to the world, the magic and the mythologies but after Mehr moves into the temple of Maha, the momentum trickles down to a stop. It gets a bit tedious as the narrative focuses on the relationship between Mehr and Amun as it slowly develops, uncertain and hesitant. The unfolding is long drawn out. But once the momentum tips, about three-fourths into the book, it is unstoppable - intense and gripping all the way to a wonderful climax.

The narrative follows the journey from the depths of despair to the bloom of hope, for Mehr as she digs deep into her reservoirs for that spark of light. Her tender relationship and how it develops with Amun, her friendships with other women - Lalita, the rest of the fanatical following within the temples of Maha including Hema and her acrimonious sister Kalini - all of it is extremely believable. Amun is probably the only male character  who gets enough face-time in the book but this isn't a complain. I think this conscious decision was a breath of fresh air in today's fantasy landscape.
There is a lot going on but I certainly wanted the pace to be picked up a bit earlier. Barring that dampener, it's a pretty strong first book from Tasha Suri and I certainly want to see where the next book is heading into.
2018 Books Book Review Epic Fantasy Tasha Suri