And I Darken by Kiersten White

November 12, 2018
I confess I have never read anything by Kiersten White - and this book, And I Darken that is the opening salvo into an alternate history epic, The Conqueror's Saga - was a complete surprise package for me. 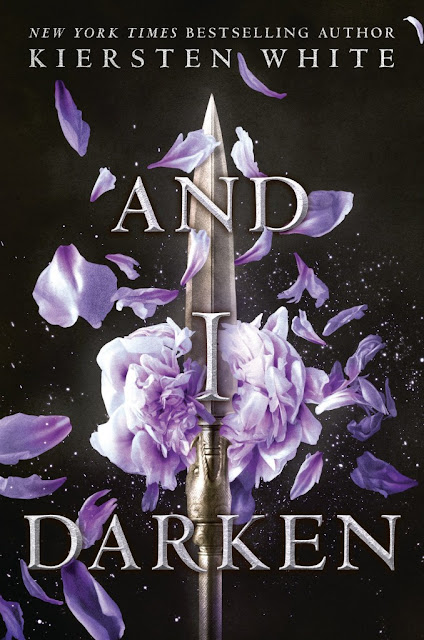 I picked this up on a whim - wherein I read that the book is a twist on the historical facts about Vlad the Impaler and the tyrannical rule of the Ottoman Empire. What if Vlad had been female? But as I read the sampler, I realized Kiersten digs much deeper than just alternating the gender of Vlad, building up an entire world around these characters that are nothing more than just side-notes in the annals of history. There is rich detail, vivid imagination and scrumptious world-building at hand as Kiersten peels off the layers from that age of history where women were relegated to the Harems and siblings killed each other for the throne, bringing us a well-thought picture of what could have been.

The first book follows the life of Ladislav Dragwlya known as Lada, daughter to the governor of a bordering state called Wallachia - who along with her younger brother Radu become hostages and are handed over to the Emperor of the Ottoman Empire by her father so to gain the empire's protection in return for their loyalty.  Having been cheated by a weak father (who chose to give up on love for his own selfish greed), Lada grows up angry and seething - trusting no one except herself, with a promise to get back to her home, Wallachia one day. Lada knows she isn't dainty or pretty like other girls and to win the affection of her father, she is determined to beat any boy, in any sport in whatever manner.  She is fierce and independent, excelling at the activities that boys pursued with a single-minded focus to prove her superiority to the world. She cannot afford to show weakness and this becomes her single driving mantra through her life. Never let your guard down. Never trust anyone.

Meanwhile Radu, her younger brother - a craven timid boy who knows he cannot compete with the violence of this world, relies on his cunning and his guileless charm to survive, to get along. He is intelligent and also compassionate, blessed with a tender heart, able to not only understand and empathize with different aspects of this cruel world but also to spin along tales and get his way with his brilliant good looks to survive the machinations of his bullies. The bro-sis duo realize the need to be there and look out for each other, as nobody else in their world really cared if they lived or died.

Their world - restricted only to the two of them, suddenly expands to include the third unwanted son of the Sultan, Mehmed in the capital of the Ottoman empire - whom they befriend in the outskirts of the empire. Growing up, Mehmed becomes very close to both Lada and Radu but with time and coming of age, the tender nature of their friendship evolves into something more. Conspiracies reel within the walls of the empire, the enemies of the empire continue to forge and break their alliances while assassins keep trying their luck to overturn the throne, employed by friends and allies within the walls.

I like the initial chapters focused on the growing up and coming of age stories of both Radu and Lada - told in alternating third party POV, it becomes the shifty base for the rest of the complex knotty relationship drama that ensues. It sets the tone for what both Lada and Radu become. Frankly while most of the marketing hype is on Lada, the female version of Vlad the Impaler - it is Radu who really fascinated me. Radu the Handsome is just a footnote in the Ottoman history but under Kiersten's able hands, he is sculpted fully to be a fascinating character. Subterfuge and charm become his weapons while Lada hangs onto her brutality and anger.

This is a character driven story and thereby focuses on the motivations and perils of what drives the bro-sis duo through such treacherous times. Their love, hate, jealousy and resentment drives the narrative. Forced to fend for themselves, both the kids react to their new surroundings very differently. While Lada is not able to let go of that angry fire in her core, reacting with mistrust and fear at everything around her, Radu takes the other extreme path. Embracing Islam, the religion that the Empire follows and making friends through his charm and good looks, so to get by. But they are both united by that one desire - to see their best friend Mehmed ascend the throne. To this end, they collude and collaborate, plotting against the enemies of the state.

While Lada's story is heart-wrenching in the innate unfairness meted out to her - This is also accentuated by what she becomes, an angry young woman who is all sharp corners, nothing soft about her; But if you ask me, it is what Radu goes through that really is devastating. Radu realizes his feelings for Mehmed pretty much the same time that Mehmed falls in love with Ladu. I mean, this is absolutely wretched. My heart went out to the this young man who despite all his devastating good looks, cannot have the one thing his heart desires. Because his love, Mehmed has fallen for the only other person in his life, who he cares for - his sister.

The topic of homosexuality is treated with kid gloves - especially in such times as the book is set in. Islam as a faith is delved into in finer details as well dispelling the myths around misguided quotes from one of the oldest and peaceful religions of the world order. What really drives the momentum of course is the slippery nature of that bond between the chief protagonists as they withstand time and numerous trials.

I am very excited to see where this heads to - modeling Lada on Vlad the cruel and sadistic ruler has some fantastic potential. The first book sets up the motivations very well and that crackling stage is now set for greater things. Will definitely be picking up books, 2 and 3. Kudos to Kiersten White for giving us such a raw, intense portrayal of characters from the side-notes of history - reminding us of the blood and the seething ambitions that shaped our world today.
2016 Books alternate history Book Review Epic Fantasy Kiersten White