Time's Children by D B Jackson

October 16, 2018
Angry Robot books are usually a safe bet, them having almost perfected the art of perhaps spotting the next big talent and getting it right a lot of times. I enjoy their books because of two reasons, exciting new talent and also the breakthrough original storylines that push the boundaries of the genre and make you think. I can sense a pattern - and so with Time's Children as well, the latest from DB Jackson ( Who is popular for the Thieftaker series writing as David B Coe) 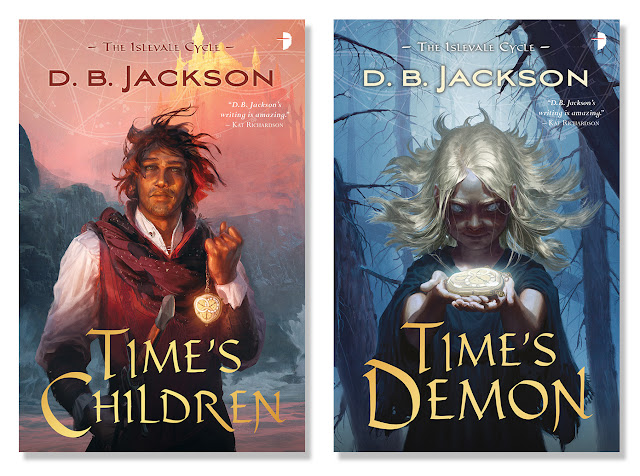 ( Those covers are absolutely gorgeous, ain't they?)

A time-travel concept melded with flintlock fantasy? Wohoo, reel me in. D B Jackson wastes no time in setting us up for a complex web of time-travel ( with of course the complexities that arise with parallel time-lines), political intrigue and conspiracies galore. Things can get hairy soon with the world going topsy-turvy on parallel time-lines but the focus of Jackson's tale never wavers from the central plot. Of conspiracies being thwarted to save the young heir  of a kingdom under attack.

Our main protagonist is Tobias, a young teenager who grapples with the power and responsibilities that come with, being one of the rare few posssessed of an ability to time-travel (Walker). Time-travel are of three types: Walkers can ford across time, Spanners move across distance and Crossers can walk through physical obstacles. Even before he can finish his graduation from the Academy of Travelers, Tobias is recruited by a desperate sovereign of the Kingdom of Daerjen to help stop a war that has now been raging on, for at least fourteen years. Just barely more than a novice, Tobias doesn't have a choice but to agree to the demands and finish that walk, fourteen years into the past. Now time-travel comes with a cost, that the Walker loses those years of his life. So technically by the time Tobias travels back to the courts of Daerjen, he already has hit late twenties. A teenager trapped in a grown man, his choices are even more limited as he realises that soon after reaching the courts, the entire Sovereign and his royal family are assassinated by the enemies of the empire. An act orchestrated by a power-crazed Autarch, of the Oquamaran empire with the help of his own set of Travelers. Now Tobias is stuck in that time-frame with the princess, a mere baby dodging the ministrations of the set of assassins sent to wipe out the royal family and stamp their authority on these shores.

Meanwhile in a completely different set of future ( having sprung along with Tobias and the assassins meddling with one version of the past!) Tobias' friend Mara realises that something is wrong with the timelines. Possessed of an uncanny knack to figure this out, Mara takes the help of a time-demon known as Tibirrin, called Droe to possibly go back in the past, help out Tobias and thus right the wrongs in her present. With so much altered, is there even a present that is relevant? But Mara doesn't stop to question such and flings herself headlong into that warped hallways of time, trusting only her own flawed optimistic judgement.

The time-travel paradox is dealt with cleverly enough, saddling the travellers with cost of that travel. Losing years traveled in their own physical self, ageing through such time. Jackson's prose is very straightforward and easy enough, so you don't realise that you are halfway through a 500-plus pages book as you are sucked straight into the conspiracies and the exciting time-travel. I was very excited with the concept of the time-demons that he introduces, fairly early on itself. In fact there are different kinds of demons in this world, all of them having a sort of interplay with time. Tobias' POV is the more significant one and Jackson draws out the confusions and the conflicts that he faces at every turn, saddled with responsibilities far greater than what a fourteen year old should be taking on.  Mara's character is the secondary fiddle and is so set up to basically bail out Tobias from this seemingly impossible quandary. Clever enough twists in that storyline but not something that would knock your socks off. Mara and Droe are very interesting side-characters and I felt they truly deserved a lot more face time. For example, questions of why did Mara even decide to attempt to go back and untangle those crossed-up time lines wasn't clear. The motivation being true-blue love wasn't enough for me. And Droe, a time-demon clearly besotted by a Walker for no apparent reason, also was a bit shaky grounds for me. I also felt the story of Orizili and his wife could have shaped up into something really nice, making for an antagonist whom we could have rooted for.

In terms of narrative and pacing, I felt the overlay of time-travel in a flintlock fantasy setting was damn cool - there are a lot of neat examples of world-building throughout. However, the pacing hits a wall right after Tobias lands up in Daerjen on his mission. The slump is recovered only towards the fag-end when things pick up pace again, frenetic and urgent.

I might be building this up as a disappointment but truly, the time-travel concepts are very neatly done and the adventure is only beginning to unfurl. Things are nicely set up for Time's Demon coming out in May 2019 and this is a world and book, with tremendous potential to be explored.  If you love time-travel and are bored with the straightforward unsatisfying explorations of the same in science fiction, then hit this one up. Fantasy infused with clever time-travel, a satisfactory opener to what can turn out to be rollercoaster ride.
2018 Books Angry Robot Book Review D B Jackson Epic Fantasy