The Armored Saint by Myke Cole

October 24, 2018
Armored Saint by Myke Cole is his first foray into the world of epic fantasy - Having read his previous works, I know that Myke can spin a yarn well enough and make us care. And this being something of a dream project for him, our expectations as readers familiar with his class, were stratospheric to say the least. Does he deliver or what. No punches pulled, this turned out to be a gut-wrenching tale of reluctant heroism, forbidden love, blind faith and heady rebellion in a well realized world that I cannot wait to get back into. 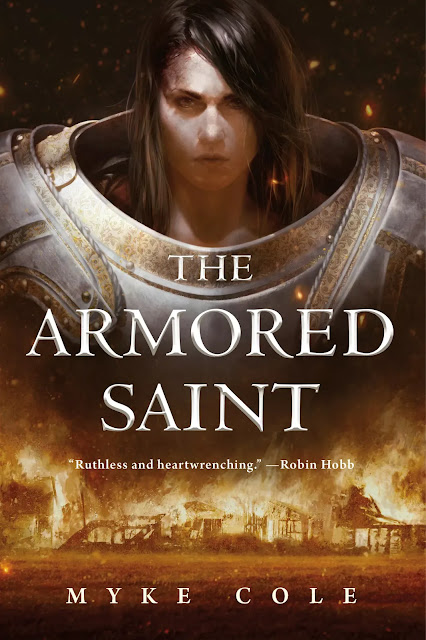 In Armored Saint, Myke sets his story in a quasi-medieval European world where life is hard and ruthless, men and women living in constant fear of either the devils breaking through the Veil that protects the world or of being branded as heretics by the religious order of knights, left to guard the world against evil. We encounter this world on the weary dusty roads with sixteen year old Heloise Factor, who loves her father fiercely enough to challenge or question the pilgrim 'Order' when they accost them on the road. In this forlorn world ravaged by wars long gone, these religious order of knights maintain the brittle peace through fear-mongering and brutal acts of violence. They are allowed to perpetrate this horror as an act of "cleansing" the world, of those who engage in the act of "wizardry" - thus inviting devils from Hell right into our world - a world supposedly protected by a veil set in place by an Emperor and his fearsome warriors known as Palantines, now long dead. In their place, is the Order with their pilgrims who wander the roads and villages, cleansing the taint.

Now Heloise along with her father Samson, a veteran of the old wars and plying his family trade as a Factor live in one of the outlying villages. But when she is forced to take part in a ritualistic cleansing act that effectively amounts to genocide, where the Order kills everyone suspect in a whole village of harboring wizards, she is forced to take stock of what is right and what is imaginary - and not just blindly follow the Writ.

Heloise is fighting her own demons (imaginary ones that comes with that tender age, doubts and guilt galore about your misguided thoughts and decisions!) but soon learns that real ones exist. Devils that pop out of Hell (So when beings blessed with 'magick' - wizards use their abilities, they invite devils that crawl out through the portals in their eyes!) But Heloise is brave, if a trifle, foolish and impetuous and does not back out of a fight especially if it involves her loved ones, for what she believes is the right. Myke gives us a ballsy heroine who despite being fearful, wades through her fears to fight for her family and her loved ones.

There is nothing new, in terms of pushing the boundaries of the genre here but as usual, Myke makes us care for the downtrodden, their hurt and beliefs. Making us root for these hapless central characters. Chiefly Heloise and her father Samson - and a handful of other characters in this village, who are daring to take on the might of a religious order. Right from get go, we know it's a dark world with the last dregs of justice or humanity hanging frail on torn barb-wires that separate the men from animals. It is up to a brave sixteen year old girl to uphold that sense of justice. There are twists in the story that sock you heavy on the jaw as you never see it coming but the truth is, I did feel like this story is just a long prelude to the actual battle that is waiting in the wings. With The Queen of Crows out now, I should rest easy as the answers are already out.

But for a slim book at little over two hundred pages,  Myke packs in a hefty wallop forcing questions about faith and truth as we trace the coming of age, of Heloise into her own woman from under the protective wings of her father and the village elders, enough to claim her place up on the front ranks of that battle about to unfold. It is also a  tender tale of love and rejection (though we're not entirely clear it is a rejection.) and at the core of the story, Heloise remains that rebelliously defiant character who dared to take on the societal norms and not just kowtow to the rules of a blind faith lying down.

I totally loved the book. It's visceral and pacy and I am impressed with the world building at this scale in such a small book. I rest my case: Myke can spin a yarn and spin it well enough. Onto the Queen of Crows now.
2018 Books Book Review Epic Fantasy GrimDark myke cole