October 04, 2018
I first heard of Rosewater, when I read Tasha Suri's tweet on the same.

"So. ROSEWATER by @tadethompson needs to be a Netflix series. Nigerian setting, aliens, 'telepaths', zombies, fiercely weird biopunk, an intricate unfolding plot... The whole time I was reading it, I couldn't stop thinking about how I'd watch the *hell* out of it." 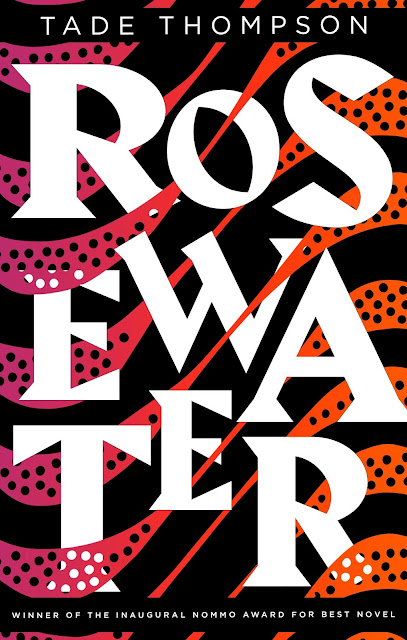 A science-fiction set in futuristic Nigeria? From an up and coming 'hottest' new talent, I knew I had to check this out. And my fingers were busy, requesting for a netgalley of the same. Got lucky and now here I am, sitting dazed and awed by the vision and the execution of a future, that is weirdly compelling, bizarre and absolutely stunning. Rosewater is one of those precious new books that manages to throw off all the yokes of 'prescribed writing guidelines' for science fiction. Indeed, Tade Thompson is a refreshing new talent and a world-class one at that.

Rosewater is a town on the edge - having developed around an Alien biodome that has mysteriously appeared in Nigeria. It is the year 2066 and the dome has been in place for a decade or more now, opening up once a year. It has been known to grant healing powers to the most incurable of diseases and so its a yearly pilgrimage that sees the population flocking over to Rosewater to get cured. Nobody knows how or why the alien dome has come into being. It just is.

We follow the story from the first person POV of Kaaro, a psychic who is a 'finder' - meaning he uncannily knows exactly where specific items are - money, gifts, missing men - you name it, Kaaro can 'find' it. In his younger days, Kaaro is a misguided youth with no sense of responsibility living as a sybarite, just bouncing from one party to the next. Till he is recruited by a special government agency known only as S45 or Special 45 division. Something akin to the Extra-Terrestrial section of the FBI that deals with the weird and inexplicable. While Kaaro keeps a day job at a bank - recruited to foil cyber-attacks on the bank databases along with some other 'sensitives' he in reality is utilised by S45 as an interrogator to slip into the minds of the insurgents and potential terrorists to foil such attacks or hunt up clues. He is a friendless chap, not easily likeable in the beginning as we shift between alternating decades in a non-linear narrative that can get confusing, real soon. But as a threat of a disease that only cripples and kills the sensitives becomes a reality in the present, we slowly start to stitch together the various threads leading unto this fragile, explosive situation that Kaaro has to uncover and dismantle before he himself falls prey to it. Could the aliens be behind this? Who is the mysterious Bicycle Girl who is spreading fascist anti-government messages among the public? Who is Molara, his ex-team-mate from his training days taking on the shape of a butterfly within the 'xenosphere' seducing him? And what of Kaaro's girlfriend, Aminat who is yet another puzzle in his life?

It's an edgy unconventional narrative - that takes no prisoners and bulls forward. Kaaro is not the most likeable of protagonist but he certainly keeps things on the boil. Unpredictable, frequently willing to bend the rules, listening only to his own whimsical desires ( And desires, he has a lot, wink wink!) The world-building is phenomenal. Both from utilising conventional elements of Africa, Nigeria to ground the whole narrative in that conventional couch but departing from the norm, in wildly imaginative ways to bring about the 'futuristic' elements. Take for example, the xenosphere itself. A psychic plane that manifests itself to the 'sensitives' where they can take any form. It gets a tad bit hallucinatory when it comes to the xenosphere adventures itself, like wild untamed fantasies. Or say Lijad, a whole city that has been re-populated thrice in history and has now disappeared off into a portal? The overarching sense of mystery abounds, of who or what is bumping off the sensitives driving the whole narrative forwards on full-steam. The interludes detail out Kaaro's youth and how he gets recruited into the S45, also filling in a lot of questions about the larger quest in itself.

It's a complicated story, I admit and I am still not sure if I got the entire narrative. But this is definitely one of the most exciting cutting-edge sci-fi stories that I've read in the recent past. The zany hallucinatory psychic planes and the alien machinations form pitch-perfect backdrop to the grey, character-driven moral compass that hints at hope and redemption. A definite must-read of 2018 and possibly a Hugo nominee next year?