Tower of Living and Dying by Anna Smith-Spark

September 08, 2018
Anna Smith-Spark, the queen of grim-dark is back at it again, with this viscerally ambitious follow-up to the dark salvo, Court of Broken Knives (that I enjoyed, ah so much!) that introduced us to the Empires of Dust and a motley crew of dark, broken damaged characters headed by Marith Altrersyr, King Ruin and his queen, Thalia. Book One was a study in violence and darkness but one that shone bright with the raw beauty of Anna's writing that was punchy, moving and just so immersive in it's unpredictable quality to enthral and shock. 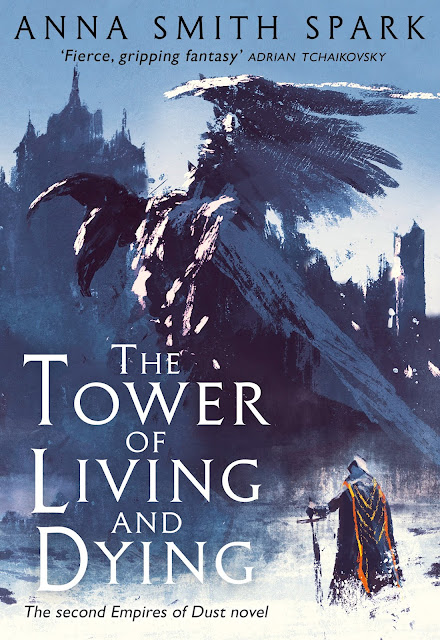 This one, Book Two was an emotional drain on my senses. In a good way, really. An overload of vicious no-holds-barred violence underlined by a disturbing brooding sense of darkness - Book Two in the Empires of Dust, Tower of Living and Dying is still full of those very same unforgettable characters who made book-one such a pleasure to read. They still worm and storm their way into your hearts, squirm under your skin and truly truly go through an evolutionary turmoil like no other. The writing is raw and visceral and shining with an ethereal beauty compelling you to stick with it as the world gets destroyed by the mad ambitions of this one man and his twisted sick dreams.

King Ruin and his Queen are painting the world red - Literally, a sea of blood of his fallen foes, Gods, foul features and humans alike, taints the unplumbed depths of his world-dominating ambitions as they set out to the Tower of Living and Dying, to honour his ancestor, the Mad God Amrath. On the other side of the world, in the decadent heart of the golden empire, the City of Sorlost is in the state of a upheaval like never before, consequences of the chain of events that the ambitious Lord Orhan had plotted, leaving him and his friends/family to suffer the hideous consequences of ambition unchecked and half-baked plots that went sideways.

Initially the alternating POV's of both Marith and Thalia is fascinating as we discover that both of them simultaneously loathe and revel in this bizarre turn of events that have made Marith, the reincarnation of a mad God with blood-lust roaring in his head and madness flowing in his veins. Thalia, previously the meek obedient High Priestess to God Tanis with the power to choose who dies and lives by her hand, comes into her own in this book. She still is questioning her decisions to stick with Marith. But her character arc is brilliant and I am loving the person she is growing into. And yet, she struggles every night with the same question of how could she let someone as vile and twisted as Marith, live? But his beauty and madness draws her in, consuming her and everyone around them - an army of mad supplicants chanting his name and desiring nothing but death!death!death trampling across the Kingdom of White Isles ringing in death and destruction for everyone in the way.

The gruesome war scenes are not for the faint-hearted. The battles are long drawn and being inside Marith's head is like being roasted alive in a hot forge. Marith is the catalyst, pushing the whole world down the slippery slope into a roaring burning forge here. There is a raw anger in Anna's writing as she conveys the misguided thoughts of the man or the symbol that Marith has turned inadvertently into. But personally for me, Thalia's POV is the more poignant, the more interesting one. Drenched with guilt, chained by the irrepressible charm of the God King, Thalia struggles with her own torn loyalties. To save the world or to save him and thus maybe, herself?

The political backstabbing and the wheels of conspiracies within the Capital Sorlost continue on - and we are treated to this tumultuous set of events that see the city of Sorlost get thrown into chaos through the eyes of Orhan, the man responsible for perhaps some of these. He got my sympathy - a man who becomes a mere pawn in the larger set of wheels grinding away. His chapters were a relief from the constant, on-the-edge battle-scenes that Marith/Thalia's POV dragged the reader into.

Tobias , the mercenary captain returns, although I thought his POV was the weakest one here. There are a few other characters, including Landra - the girl whose family was destroyed by Marith and the mysterious Raeta looking for revenge against Marith. Then there is Nilesh, the servant maid in Orhan's household back in Sorlost who is witness to the unraveling of the conspiracies within the city.

There is phenomenal world building in this book as we travel across the White Isles. On the other side of the continent, the golden city of Sorlost with its amazing cultural quirks that Anna beautifully paints up in book one, is still intriguing. Anna still writes about a few newer aspects about this decadent city making you gasp in wonder or sit up in shock as you get through book two. There is no "bridge-building" here, no book-two lag phenomenon. Anna has taken all that made book one such a brilliant debut and then thrown in a few more elements of absolute brilliance, blended all that into a violent unapologetic mad mixture building this phenomenal book and the series into something truly spectacular and worth waiting.

There are gods, dragons, half-gods, shadow-creatures, mad men, god-kings and queens of power. There is lust, ambition, intrigue, conspiracy, intrigue, politics and death! death! death! This is a wonderful addition to the series showing us the potential of what Anna is capable of. We are headed for an absolutely dangerous cliff-top from where there is no looking back now. Plunging down into this mad dangerous destiny in store for Marith and gang.
2018 Books Anna Smith Spark Book Review Epic Fantasy GrimDark