The Last Days of Jack Sparks by Jason Arnopp

August 16, 2018
Every once in a while there comes along a well executed, darkly comic and exuberantly horrific story that forces you to just drop everything else, stay up way past your bedtime reading - dunking coffee to stay awake, looking over your shoulders all the time, grinning like an idiot while your heart is hammering away like a jazz concert on boosters till you hit the last line and then again, stay up all night just thinking about this book.

I know I am perhaps two years late in reading this phenomenon of a book but good books persist beyond years. And hey apparently there's a movie being made on the book (and heck, I am not surprised as to how well this lends itself to being movie fodder! And Jason Arnopp himself is a scriptwriter with some serious credits to his name) 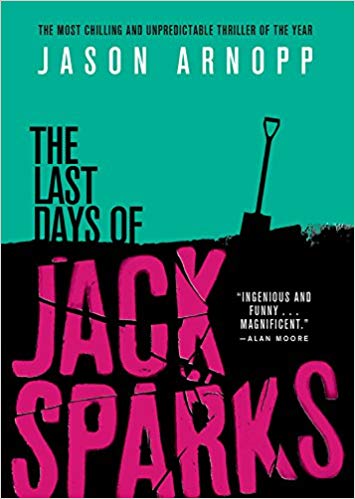 So the Last Days of Jack Sparks is sort of an autobiographical account of this pop journalist Jack Sparks who is out to debunk the myths around the phenomenon of supernatural horror/ ghost sightings. I say, sort of - as it's interspersed with interviews and newspaper clippings about various connected incidents or people who appear in Jack's story. Jack is a social media nut, hooked onto all his accounts buoyed on by his so-called fans. He is also only the most megalomaniacal egoistical (who admits that he's got a smoking pit in his heart where empathy used to be) twat who doesn't think twice about offending anybody. Which means, he is loved and hated in equal measure across the internet and real world. His previous claim to fame has been his seminal work on gangsters ('Jack Sparks on Gangs') and drugs (titled, you guessed it, 'Jack Sparks on Drugs') done through some intense primary research ( which we learn through redacted mails between him and his agent, Murray wherein Jack is so incapacitated that he had to finish his book through ghost-writing!) The very act of putting his name up there as a measure of authenticity smacks of his towering ego and self. And now he turns his attention to Halloween to lay bare the truths and 'trickery' as he calls it, behind ghost sightings.

Right off the bat, we are informed that Jack is dead - ( Through his brother Alistair Sparks who frequently interjects to refute the tricky statements made in Jack's manuscript. And hence, this forms the crucial pivot on which the story cliff-hangers are suspended on.) We accompany a sneering disbelieving Jack into a church in Rome where a supposed exorcism is underway. A girl barely out of her teens and her hopeful mother, a famous exorcist and a bored translator are the actors in play. The exorcism gets underway only to be rudely interrupted by our unbeliever halfway through - when Jack convinced of the Oscar performances of these actors, just has to laugh and vent his disbelief. But at the Rome airport, Jack's rock solid belief that everything can be explained by science is shaken to the core when his Youtube account has a mysterious video uploaded, of which he himself has no clue. He is intrigued by this unbelievable ghost video filmed in a dark basement - that gets deleted soon after. Pursuing leads takes Jack to first Honk Kong and then to LA, Hollywood where events turn murkier and unbelievable, no longer explained by the laws that govern the world.

Jason has upgraded the genre of horror in this book to cleverly mesh in technology and internet elements to keep it relevant with the social media generation. Most of the story unfolds from first POV - that of Jack Sparks, easily one of the most vile objectionable self centred person who despite, clearly being  an oaf, comes across as earnest and sincere in his attempt to prove the world wrong. The premise of the existence of ghosts works because of the unreliable narration. The half-lies, omitted truths and not least of which is caused by Alistair, the brother of the narrator frequently interjecting himself into the narrative to disprove the veracity of events as it unfolds, according to Jack.  The uncertainty hangs in the air. The unreliable nature of Jack's narrative, is in someways arresting enough for us to follow along as the events in the book, by part-II take on a bizarre inexplicable turn. Jack's voice is full of himself, but is often scathingly funny too making you laugh hard.

And all this goes for toss by part II of the narrative as the duplicitous narrator in Jack Sparks spills the beans about his addiction, fears and that teeny-tiny spark of doubt, he has been harbouring about Ghosts. Peppered with self-depractary remarks and offensive inky black humour, Jack's harrowing journey spiralling down in to the depths of hell, is a tale very well told. Compulsively readable leading all the way to a very clever climax, the Last Days of Jack Sparks is a book every horror fan should read. With mind-bending twists and revelations all through, it's a gripping page-turner that really made my two days.