July 15, 2018
Sacred Games was released on July 6th on Netflix India and a mere six days later I think this series has hit a cult status and following. It is definitely one of the sharpest originally 'made for India' content that I have seen in years and while yes, there is a lot of hype for the heavyweight names associated with Bollywood getting down and dirty on the small screen, I think it is all justified and totally worth it. Is it India's answer to hit international web series, like Narcos or Marco Polo? I think we shall soon find out the numbers. But it is definitely opened the floodgates for Netflix India, in terms of the awareness and its war-cry in this brutal 'content' game up against the stalwarts like Amazon Prime. 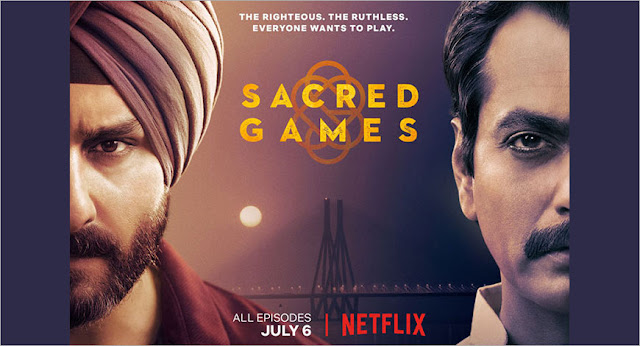 So Sacred Games is directed by two stalwarts of the industry, Anurag Kashyap (Gangs of Wasseypur and many more acclaimed movies) and Vikramaditya Motwane ( Udaan, Lootera) and stars Saif Ali Khan, Nawazuddin Siddique and Radhika Apte in key roles. I think Netflix hit the jackpot reeling in this team for their first 'India' based content - based on the 900-page tome of the same name by Vikram Chandra. Now I haven't read the original book but the writers of the series have done a stupendous job of converting this into an intriguing and taut thriller full of surprising reveals, cliffhanger endings and twists galore. This one is basically Netflix' appeal to a larger wide stream audience pool and they are leaving no stones unturned in the promotion, going by the roaring response and appeal this has, for a greater subscriber base. This could be the turning point for Netflix in India, I think - It was eerily coincident as I just flew back from my home in Kerala and on the flight, I saw a couple intently watching Gaitonde declare himself above God in the alleys of Gopalmath on their mobile phone. The fever's creeping up and even the billboards at the Kempegowda airport in Bangalore proclaimed Ganesh Gaitonde to be the emperor of Bambaiya.

The real stars of the show would be the directors and the writers. They have done a stupendous job of converting the book-form into a super-taut cult-level web-series that saws off all the superfluous scenery of Mumbai city from the book to give us the grim underbelly of the Maximum City. A series that dares to make fun of the political turmoils that shaped our country even as it traces the rise of a gangster lord in Bambaiya. This is a first of its sort in many ways. And both Anurag (with enough street cred to his names in connecting Bollywood movies with gangster motifs!) and Vikramaditya have gone full tilt in developing the same, presenting the series in all its grim blood-soaked no-holds barred glory - giving us the comfort of certain tropes we are familiar with and then taking a poleaxe to it. Based on interviews, it becomes very clear that both the directors had a fairly wide gamut of a play area unfettered by the acrimonious censor board in developing this web-series. And it is evident and in your face with the expletives exploding on-screen and the adult themes handled ably well that makes it raw and brutally honest. Gun-toting chutiyas, love being a murdering gandu, building a Taj Mahal in one's gaping ass. Just too many references that will make you squirm and yet ground you in the realities of a lean life, with no guarantee of seeing the next day's sun.

The story is a real humdinger that explores crime and gang-wars of the 80's-90's Mumbai, the divisive and destructive powers of religion - alternating between the feverish accelerating present where the city is headed for an apocalypse in 25 days and different forces are racing against time to untangle this puzzle and also the prophetic rise of a gangster from his humble brahmin origins to a feared Don. There is Sartaj Singh, disillusioned and popping anxiety pills who gets a mysterious call warning him about this cataclysm about to befall the city of Mumbai in 25 days. And when the caller identifies himself as Ganesh Gaitonde, one of the most feared Dons in Mumbai who has resurfaced after years, Sartaj is pushed into a seething pool deeper than he's ever treaded through before. 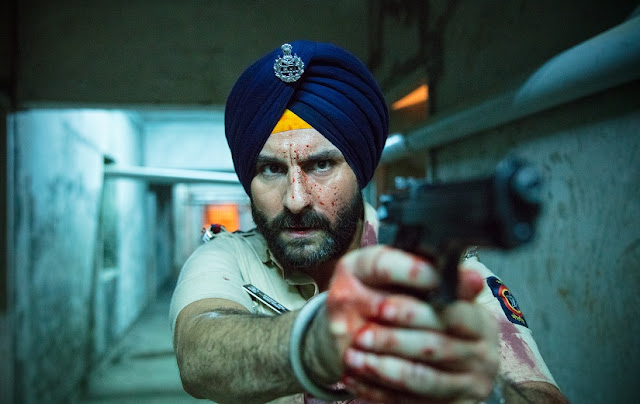 Even by Vikram Chandra's admission, Sartaj Singh's character that is a bit laid-back and a lot more cautious in the book-form has taken on a shine and an unspoken urgency in his actions in the brilliant portrayal by Saif Ali Khan. Putting in one of his best performances till date, after Omkara. Nuanced, matured and understated. An overweight honest hapless cop who has lost his promotions, the respect of his police brethren and even his wife, Sartaj is almost a trope in hard-boiled noir fiction. But Saif's acting really brings out the shine, be it the frustration, the anxiety and the mental tussle that he is always undergoing. Trying to beat his own personal demons while trying to save his favourite city from a cataclysm, battling internal politics with his own boss and colleagues, trying to win favours with the central intelligence 'madam' and simultaneously pacifying his own 'story-telling' mom on the phone. It's refreshing to see him pull this off after a series of flop-acts in "Chef" and other recent movies. 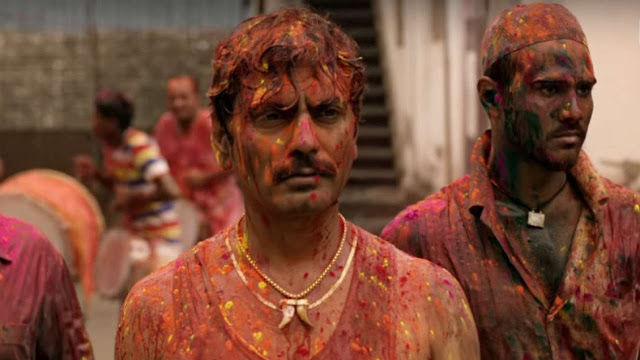 Much has been said about Nawazuddin Siddique and so I won't add to the screaming fan-fare. Yes, the guy is God when it comes to portrayal of black humour and grim-dark dons. He deserves all the accolades and he drives it home with a fury, be it the funny Bambaiya speak or the OTT punch-lines. Ganesh Gaitonde is going to be a household name among the Indian Netflix(-ers? Is that term oxford-ised yet?) and you don't need to mark my words for it. He totally deserves. He is an Ubermensch of power-acting. Period. Radhika Apte playing the hard-nosed desk analyst who longs to be a field agent to break the stereotypes about female RAW agents, I think is just trying too hard. Anyway we have seen just too much of her on Netflix and I have decided, I don't like her. Not just the character who swears her frustration out but her portrayal of the same as well.

There are some wonderful secondary characters who bring the luminescence out in this whole series, part One. Be it Kubra Sait playing the aching starlet called Kukkoo or Jitendra Joshi bringing the much needed smiles playing the sidekick constable Katekar (Some of the best moments earlier in the series is between him and his nagging wife in a one room house in Mumbai struggling to make ends meet as a middle-class cop) Then there is top cop Parulkar, played by Neeraj Kabi and Majid Khan (Aamir Bashir), a muslim police officer who call the shots within the police force and are the nemesis of Sartaj's existence. Bunty, the violent almost psychotic lackey of Gaitonde played by Jatin Samra - Every time he swaggers onto the screen, you cringe at the unexpected unpredictability of this character to espouse violence. And of course Kanta Bai, marvellously essayed by Shalini Vatsa the iron matron who sells liquor and yet keeps a sane leash on all around her.  Some of these portrayals top both Saif and Nawazuddin as well, I dare say.

The writing picks up momentum as we go past half-way but there are no answers forthcoming. The series poses moral conundrums aplenty and we see the characters shifting through shades of grey giving into their weaker moments. And I think this is what made this series a winner for me. The flawed angsty nature of human beings brought to fore - as Gaitonde questions himself about his own status as a God, we know that even Gods are only as powerful as the believers. Mumbai city - glittering and garbage-fused at the same time is a star in itself and draws you into its murky under depth as the time ticks faster than ever. This is gold standard for Indian series and we hope to see more such content take on mainstream popularity.

As Gaitonde muses, Sacred Games is a story that is the scorpion's sting. Once you are bitten, you are done for.
2018 Movies Indian writing movie review netflix TV Series Webseries

Unknown said…
Such a binge watch it was.. ended up watching the series in one sitting. Sinfully engaging.
July 15, 2018 at 9:25 PM

Sachin Dev T said…
Agree! But I forced myself not to sit and binge watch. Draw it. Watch some episodes twice. Because there are so many small details.
July 16, 2018 at 5:52 PM