June 03, 2018
Angus Watson's fantasy spin on historical facts continues to regale us - in his latest series, West of West. I had thoroughly enjoyed the Age of Iron - a historical epic, the first in a political sword and sorcery series that was sheer fun, full of pulse-pounding action and some unforgettable characters, brimming with that gallows humour. The series sought to shed light on the pre-christ era and the roman conquest of the south brit isles - with of course creative liberty in terms of the magic and the gory action which probably defined those times. 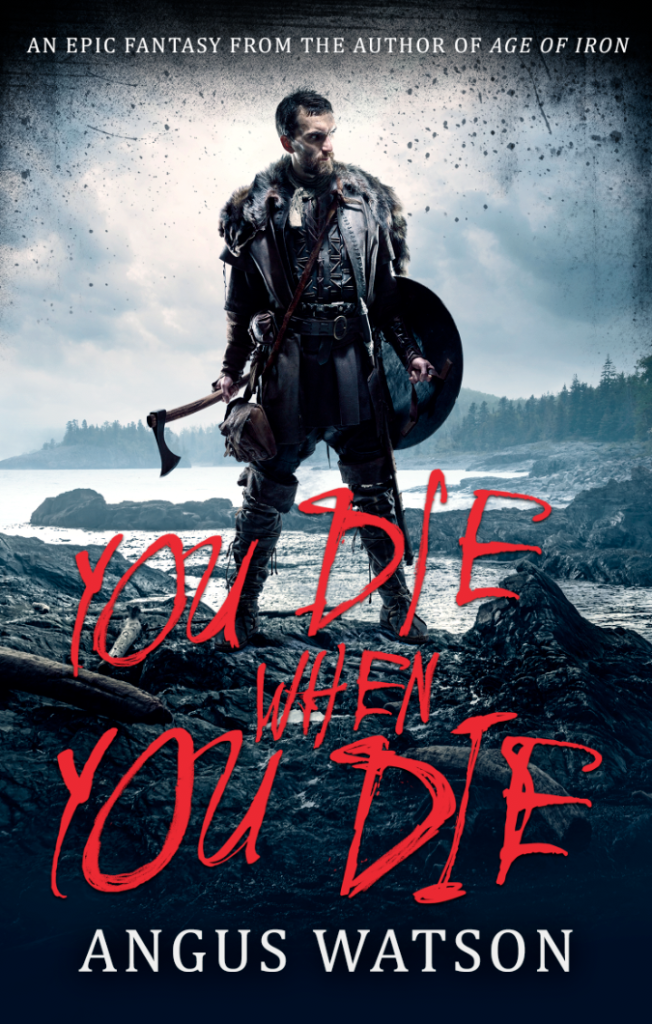 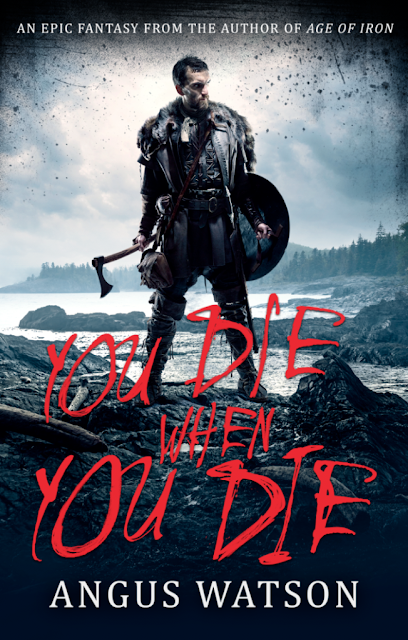 And now with this one, You die when you die - he turns his attention to the Vikings - setting out to explore their little-known exploits on the American soil, the first intrepid explorers who dared to go beyond set boundaries. His treatment stands out - converting that research into believable and highly entertaining fiction that still rings deep and true in some fashion. I know some of my favourite fellow bloggers have loved it and showered it with much love and fanfare but I was wary going in.

What, with an irreverent and highly laughable premise where a set of tribals, known as the "Mushroom Men" living in a veritable paradise beside a lake that provides bountiful good weather and food known as "Hardwork", are the central characters in a world-destroying prophecy as seen by an egoistic and whimsical empress in the last stages of her pregnancy - mad with pain and crazed with fear, the empress orders the tribe to be wiped out, so to save the world. And this is where the wild, crazy ride just picks up - A riptide that quickly explodes into a roaring torrent of impossible events, an immersive thrill-ride that just sweeps you off your feet, leaving you gasping, spluttering in disbelief and crying hoarse for more - as you travel with this brave little group of the surviving mushroom men to the promised land in the west, called the Meadows.

Replete with head-spinning action ( Well - when a group of magically altered assassins are hot on the trail of these headstrong blue-eyed, blonde and curly haired tribals, you cannot NOT expect fireworks. and it's graphic as you would well expect in an Angus Watson book - wall-to-wall and remorselessly realistic. ), heavy with highly inventive expletives (There's a whole tribe that talks casually in cuss-language!) and relentless pacing that just sweeps you along like an angry Mother Water ) You die when you die is a highly entertaining tale of gritty survival. Of heroes born out of necessity faced down with daunting odds. Of friendships and relationships born out of adversity.

When I started the book, I just couldn't seem to identify with the characters. With names that just were plain annoying - Finnboggy the boggy, Keef Berserker, Wulf the Fat, Sassa Lipchewer, Thyri Treelegs - I was shaking my head but continued to plough on. And somewhere along the way, without me realising, I figured I was just so heavily invested in these funny but absolutely adorable characters that I had to figure whether they would survive this impossible journey. Finn - who hates being called Boggy is a thoughtful young man, immersed in his fantasy day-dreams about the various women in the tribe and is a self-indulgent youngster who is plain lazy. There's Erik - an exiled mushroom man or "Hardworker" as they call themselves, who can talk to animals and thus has a pet black bear called Astrid. There's Garth Anvilchin whose chin and his martial prowess are his greatest assets. And a whole lot more of these funny people - some relatable, some bizarre but all rivetingly enjoyable.
And on the other hand, we have the interesting assassins sent by the empress, each of them with a different 'super-power' all bred and trained to kill. With names like Sofi Tornado and Chogolisa Earthquake. Every single one of them have their own quirks. I thought the sanest of the lot was possibly this girl Sassa, whose chain of thoughts were actually normal revolving around settling down and starting a family with her husband, once they were through with this harrowing flight.

Relatively straightforward in terms of the plot which is nothing but a headlong desperate race, the plot twist that hit me at the end, I thought was pretty cool. There's copious amounts of carnage, crude humour and impossible magic. A wonderful addition to the historically inspired fantasy fiction that Angus spins out, You die when you die is a gritty adventure with some surprisingly loveable, well realised characters for whom you will be rooting for by the end. It's a reckless ride, strap in and just enjoy as you get swept along in search of a new haven.
2017 Books Angus Watson Book Review dark fantasy historical fantasy